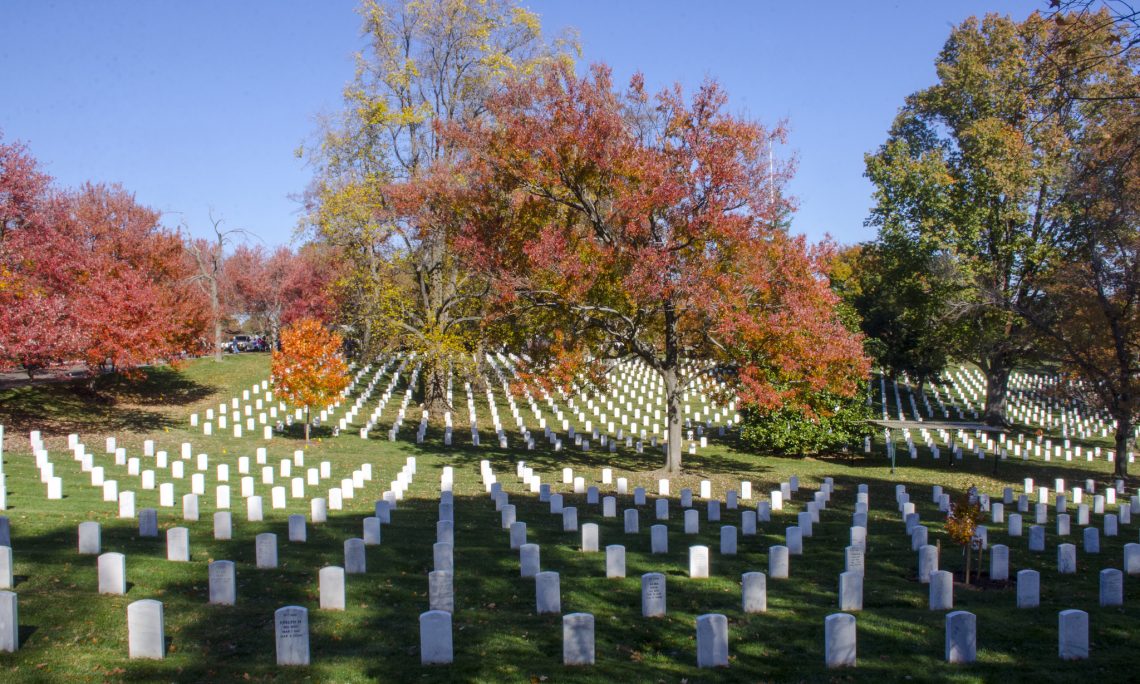 On Veterans Day 2014 fall leaves bring autumnal colors to Arlington National Cemetery, in Arlington Virginia, just outside Washington, DC. Photo by Tim Brown..“Veterans Day is an official United States federal holiday that is observed annually on November 11, honoring people who have served in the U

November 11 is Veterans Day in the United States, and parades, ceremonies and tributes to veterans are planned in small towns and large cities throughout the country to honor those who have served in the U.S. military.

This year, as always, the memorial amphitheater built around the Tomb of the Unknowns in Arlington Cemetery, just outside Washington, remains the focal point for national Veterans Day ceremonies. The traditions are firmly established: a combined color guard representing all military services executes “present arms” at the tomb, the president lays a wreath, and a bugler plays “Taps,” the beautiful and haunting bugle call used at U.S. military funerals.

In 1958, two unidentified American war dead, one from World War II and one from the Korean War, were buried in Arlington Cemetery alongside the Unknown Soldier from World War I who had been interred there in 1921. And in 1984, an unknown serviceman from the Vietnam War was placed beside them. They jointly symbolize all Americans who gave their lives in all wars. (The remains of the Vietnam Unknown were exhumed in 1998; he was identified through DNA testing and reinterred in another cemetery. Since then, that crypt has remained vacant.)

The earlier, more narrowly focused Armistice Day commemorated the end of fighting in World War I under the armistice implemented at 11 a.m. on November 11, 1918 — “the eleventh hour of the eleventh day of the eleventh month.”

President Woodrow Wilson proclaimed the first Armistice Day just a year later, setting the characteristic tone of the U.S. observances in years to come. He said that the holiday would be “filled with solemn pride in the heroism of those who died in the country’s service and with gratitude for the victory, both because of the thing from which it has freed us and because of the opportunity it has given America to show her sympathy with peace and justice in the councils of the nations.”

Armistice Day’s message of peace and international solidarity was reiterated when the holiday formally received its name in 1926. Congress passed a resolution asking the president to call for the U.S. flag to be displayed on all public buildings on November 11, and to call on citizens “to observe the day in schools and churches, or other suitable places, with appropriate ceremonies of friendly relations with all other peoples.”

Congress followed up in 1938 by designating Armistice Day a legal holiday, dedicated to the cause of world peace.

But Wilson’s hope that World War I would be the “war to end war” collapsed soon after, with the outbreak of new fighting in Europe. The United States entered World War II in 1941. More than 16 million Americans were to take part; 407,000 of them died, more than 292,000 in battle.

Seeking to pay tribute to those 16 million, and others who had served the nation in any of its wars, Congress and President Dwight Eisenhower in 1954 redesignated the November 11 holiday as Veterans Day. “On that day let us solemnly remember the sacrifices of all those who fought so valiantly, on the seas, in the air, and on foreign shores to preserve our heritage of freedom,” Eisenhower wrote in his first Veterans Day proclamation, “and let us reconsecrate ourselves to the task of promoting an enduring peace so that their efforts shall not have been in vain.”

Television journalist Tom Brokaw called attention to the sacrifice of the World War II generation of veterans in a 1998 book, The Greatest Generation, in which he deemed them “the greatest generation any society has ever produced.” In the same year director Steven Spielberg portrayed American soldiers in World War II Europe in his film Saving Private Ryan; Clint Eastwood did the same for troops in the Pacific in his 2006 films Letters from Iwo Jima and Flags of Our Fathers.

In May 2004, aging but proud veterans attended the dedication of the National World War II Memorial on Washington’s National Mall, between the Lincoln Memorial and the Washington Monument.

In 2007, a 15-hour-long Ken Burns documentary, The War, featured interviews with dozens of World War II veterans. Burns said he had undertaken the project partly because the war’s veterans were dying at an accelerating pace. “It hurt me that we were hemorrhaging these memories,” he said.

Arlington National Cemetery is just one of more than 130 national cemeteries throughout the United States and Puerto Rico that contain nearly 3 million gravesites.

The Korean War is commemorated with a memorial near the National Mall comprised of 19 stainless steel statues representing a squad on patrol. More than 54,000 U.S. soldiers died in the three-year conflict. The memorial was dedicated in 1995.

The Vietnam Veterans Memorial — in Constitution Gardens, adjacent to the National Mall — features two polished black granite walls inscribed with the names of more than 58,000 U.S. service members killed or unaccounted for in the Vietnam War. The names of eight service women who died in the Vietnam War are included on the wall, which was completed in 1982.

The Vietnam Women’s Memorial was dedicated in 1993. It is located a few yards from the main memorial and consists of a sculpture that depicts three women, including one who is caring for a soldier. More than 265,000 American women served during the Vietnam War.

The Department of Veterans Affairs (VA) is responsible for all U.S. veteran affairs.