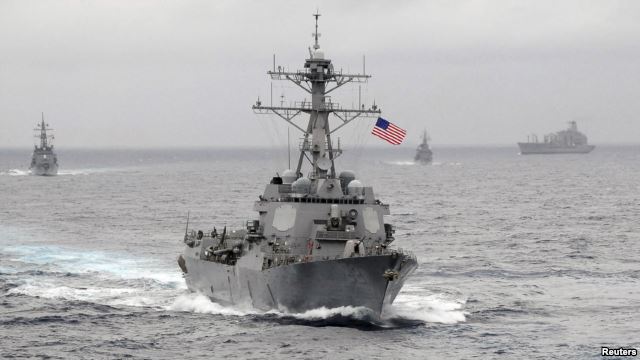 The US Navy guided-missile destroyer USS Lassen sails in the Pacific Ocean in a November 2009 photo provided by the U.S. Navy.

n what is seen as the most significant challenge yet to territorial limits Beijing asserts around its man-made islands, a U.S. guided missile destroyer Tuesday sailed within 22 kilometers (12 nautical miles) of a reef in the disputed Spratly archipelago.

The USS Lassen approached Subi reef, occupied by China and also claimed by Taiwan, Vietnam and the Philippines.

The Lassen, homeported at Yokosuka naval base in Japan, was monitored, followed and warned after it “illegally” entered Chinese waters, according to the foreign ministry in Beijing.

An opinion piece carried by the official Xinhua news agency said “Washington’s allegation to exert so-called rights of freedom of navigation as the international law allows are outright lies. China has never done anything to infringe upon the freedom of navigation in one of the world’s busiest sea lanes.​”

Tuesday’s mission was completed without incident, according to a U.S. military source.

U.S. officials, weeks ago, had indicated that the navy would send a ship inside the claimed territorial limit of China’s man-made islands chain.

“I don’t think anybody will be surprised that it happened,” said Sheila Smith, senior fellow for Japan studies at the Council on Foreign Relations.

The U.S. Navy’s challenge comes amid increasing rhetoric from Beijing about the need to defend its “sovereign territory.”

“That suggests that they are not ready to peacefully resolve these disputes but, in fact, their buildup and the presence of Chinese military on these islands suggests that they want a fait accompli, they just simply want to occupy the islands,” Smith, in Washington, told VOA.

About 200 Chinese troops are believed to be stationed on Subi reef in the South China Sea, which is naturally above water only at low tide.

The Chinese construction projects on low-lying reefs are seen as an attempt to assert air superiority or dominance in the South China Sea.

“As you know around the edge of the South China Sea are countries that don’t have the capacity to compete with China’s growing naval and air power,” Smith noted.

Thus, analysts predict, the US Navy will continue such patrols which are in line with its longstanding practice.

“I don’t think the United States should stand back. I think it’s one of the navies in the region that others in the region look to, to set the tone and to lead on the defense of these norms,” said Smith. “So I don’t think this is going to be one-off. I think it’s going to be maybe not a consistent practice around these particular islands. But I think the United States navy will maintain its presence in the South China Sea as it has for decades.”

Reacting to the American navy’s movement, Philippines president Benigno Aquino told foreign correspondents in Manila that “any movement through this particular body of water should not be hampered by any particular entity.”

Japan on Tuesday repeated its expression of concern about China’s action in disputed territories.

Australia’s defense minister, Marise Payne, in a statement Tuesday, said Canberra strongly supports the right of all states “under international law to have freedom of navigation and freedom of overflight, including the South China Sea” but added that “Australia is not involved in the current United States activity in the South China Sea.”

Earlier this month Adm. Scott Swift, commander of the U.S. Pacific fleet, told a maritime conference in Australia that “some nations” are behaving in a manner inconsistent with international law, a clear reference to China.

(This article originally appeared on the VOA News website)