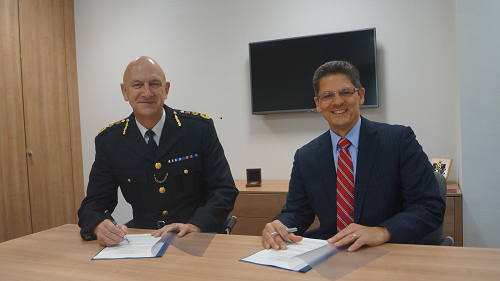 Over the past decade, the two agencies have worked together on several major multimillion dollar fraud investigations, leading to a number of high profile convictions. The launch of the City of London Police Intellectual Property Crime Unit in September 2013 brought a new dimension to this partnership, with a shared focus on tackling intellectual property crime.

Over the last few years, Operation In Our Sites has led to the suspension of thousands of websites and the disruption of illegal activities costing the intellectual property industry hundreds of millions of dollars.

Last November, a referral from I directly led to the arrest of two men in Yorkshire on suspicion of leaking a Hollywood film before its official release date in an operation that generated significant media coverage in both the U.K. and U.S.

“International cooperation among law enforcement agencies is crucial to effectively combating intellectual property crime. Today, this memorandum of understanding between I and the City of London Police formalizes a long-standing and mutually beneficial partnership in the fight against these global criminal networks,” said Etre. “I am confident that this memorandum of understanding will further cement the relationship between our two agencies and, as a result, lead to even more success in dismantling these networks and convicting these offenders.”

“Intellectual property crime is a truly global problem which, via the Internet, transcends national borders and boundaries. To counter this rapidly expanding threat requires international law enforcement to operate as one single force focusing in equal measures on prosecution, protection and crime prevention,” said Leppard. “Our partnership with I has already directly led to the suspension of hundreds of illegally operating websites and the arrest of several people. I look forward to the memorandum of understanding we have signed here today taking our partnership to a new level of collaboration which in turn will make life more difficult for intellectual property criminals who continue to offend in our two countries and many others around the world.”