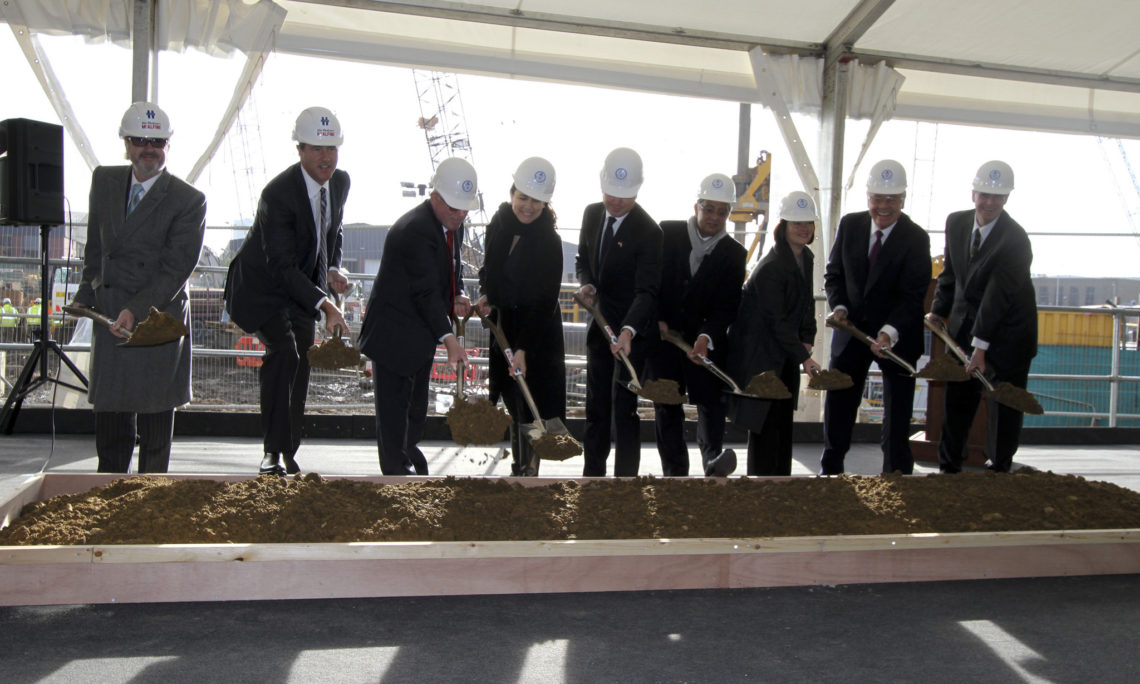 Today, in an important symbol of our enduring friendship with the United Kingdom, U.S. Ambassador to the United Kingdom Matthew W. Barzun, Director of the Bureau of Overseas Buildings Operations, Lydia Muniz, and Ravi Govindia, Leader of Wandsworth Council broke ground on the new U.S. Embassy in the Nine Elms neighborhood in London.

The new Embassy is expected to be completed in 2017 and will be constructed by B.L. Harbert International of Birmingham, Alabama.

During the brief ceremony, Ambassador Barzun commented: “Today is for celebrating a new facet of the special relationship.  The U.S. and the U.K. have long been partners in development across the globe.  But today we celebrate a different kind of development — the continued development and evolution of London itself.  We are proud to be putting down roots in Nine Elms.  And we’re proud to provide an anchor for more businesses and jobs, bringing thousands of new neighbors to fuel economic revitalization here.”

Joining him in echoing these sentiments was Ravi Govindia, leader of Wandsworth Council and co-chair of the Nine Elms Vauxhall Partnership, who said: “We’re delighted work is now officially underway on what will be one of the most remarkable embassies in our great city. It is going to be a dazzling centerpiece for Nine Elms on the South Bank and will set new standards for low energy use and sustainability.  The embassy’s move is also an incredible coup for Wandsworth. The U.S. Government was among the very first institutions to buy-in to our vision for Nine Elms and their investment was a watershed moment in the area’s transformation. They have been a magnet for new investment and a vital catalyst for a regeneration program which is delivering tens of thousands of jobs and homes. The ambassador and his staff are very welcome to Wandsworth!”

Lastly, Lydia Muniz, the Director of the Bureau of the Overseas Buildings Office for the U.S. Department of State focused on the environmental aspects of the new Embassy.  She remarked: “Our new building will be a model of energy conservation and will boast cutting edge features that meet both the U.S. and U.K. standards of energy efficiency and the use of alternative energy sources.  This project is not just about the building. It is the people who work there – both British and American, those who visit it, and those who work in close proximity to it. Its design and location encourage walking, cycling, and the use of public transportation.”

The new Embassy, designed by KieranTimberlake of Philadelphia, Pennsylvania, will be situated on a 4.9-acre site in the Nine Elms Opportunity Planning Area and will include a chancery, a consular section, support spaces, a U.S. Marine residence, access pavilions, and parking.

Its design incorporates sustainable features at the leading edge of practice, including aspirations for carbon neutrality, a self-sufficient water system, as well as goals for minimum certification at Leadership in Energy and Environmental Design (LEED®) Gold and Building Research Establishment Environmental Assessment Method (BREEAM) Excellent.

A full set of photographs of today’s ceremony are on Flickr.