This op-ed by Ambassador Johnson was first published in the Scotland Herald, edition of Wednesday, October 18, 2017.

AMB JOHNSON: It’s easy for Americans to get caught up in the romance of Scotland. From Celts to clans, the history of Scotland captures our imagination. So much art, literature and music has been produced here. So many inventions and scientific discoveries have been made here. It’s easy to see how Churchill could claim that “of all the small nations of this earth, perhaps only the ancient Greeks surpass the Scots in their contribution to mankind.”

That’s why Americans talk so proudly about their links to Scotland. In fact, there are over 27 million people in the United States today who claim Scottish ancestry. Many of our most famous citizens had their roots here – from Andrew Carnegie to Thomas Edison, John Muir to Johnny Cash.

In the history of the United States, it’s rare we’ve even had a President who could not trace his origins back here. Donald Trump, whose mother was born in Lewis, is the latest President to continue in that long running tradition.

So it was always going to be an early priority for me to come to Scotland – the President would expect nothing less. But it’s not only your proud heritage and history that brings me here. It’s business.

Scotland’s economic importance to the United States cannot be underestimated. The connections forged over the centuries have established a close and highly beneficial trading partnership between us.

For more than a decade now, for example, we’ve been your best customer. We buy more than £4.5 billion of your products and services each year. It’s a testament to Scottish cuisine that so much of this is in the food and drink sector. Your whisky is a top seller – the United States spent over a billion dollars on Scotch last year alone!

We are not only your biggest customer, we’re Scotland’s largest investor. In 2016, more than a third of all foreign investment in Scotland came from the United States.

600 American companies in Scotland also offer careers in a wide range of sectors – such as financial services in Glasgow, healthcare in Angus and Ayrshire, and the energy industry in the North East. All in all, U.S. companies employ around 90,000 people across the length and breadth of Scotland.

It goes both ways. More Scottish firms than ever are setting up shop in the United States. This means two things: new customers for Scottish companies and new jobs for American citizens.

Business, trade and investment between us is strong, and we can make it stronger.

Scottish companies know there is tremendous opportunity in America. We are open for business and have a huge consumer market. Companies from Irvine to Inverness have discovered how good the U.S. market can be. 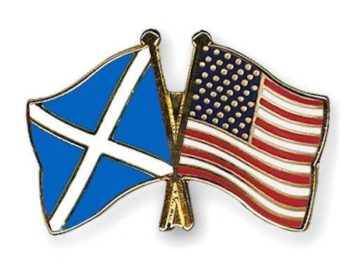 Our Consulate General in Edinburgh is always on hand to offer advice to any business looking for new opportunities in America. Day in and day out, they help companies of all shapes and sizes enter the US market.

I’ve also come to visit Glasgow and Edinburgh to meet leaders of both American and Scottish companies. We all share the same goal – to create more opportunities for business, both now and in the future.

This is my first visit to Scotland as the U.S. Ambassador. I look forward to visiting often as together we continue to deepen our friendship, enhance our security, and increase our prosperity.