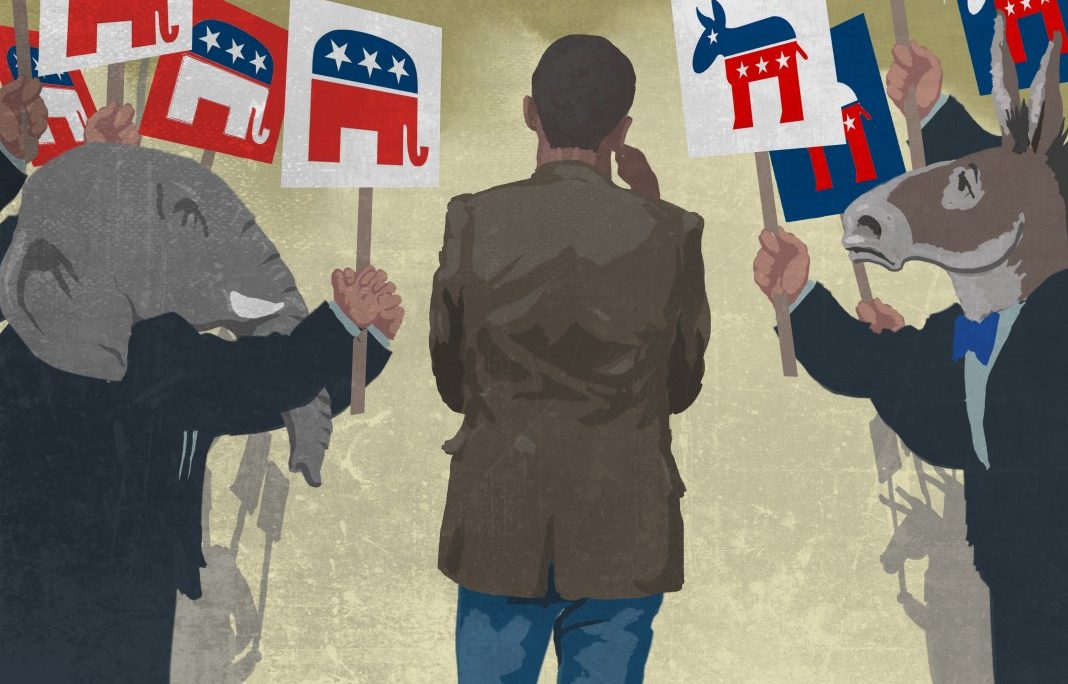 26 April 2016  The rise of the independent voter    The United States has two major political parties: Democratic and Republican. Ask an American voter which one she or he sides with, and the most likely answer is: “neither.”

Recent polls say at least 4 in 10 Americans identify as politically independent, even if they tend to “lean” Republican or Democratic on the issues. Only 3 in 10 identify as Democrats and the other 3 in 10 identify as Republicans. The Gallup polling organization calls this a “near historical low” for both major parties.
America’s founders did not envision political parties, but even under George Washington, the first president, factions arose, with Americans divided by the issue of how much power the new central government should have.

26 April 2016   On elections, young Americans turn to YouTube    Americans are following this year’s election on the Internet. Over the past year, they’ve watched more than 110 million hours of election content on the YouTube video site.
That, YouTube says, is 100 times more hours viewed than election content viewed on U.S. cable news channels C-SPAN, CNN, MSNBC and Fox News combined, ever.
Who’s tuning in? Young people mostly. Nearly 6 in 10 who use YouTube as a news source are under the age of 35.

Our most popular pages on the U.S. Presidential Elections may also be of interest:

How does it all work?  Watch our video, below:

26 April 2016  Harriet Tubman is coming to the $20 bill    Anti-slavery activist Harriet Tubman makes history again. She will be the first woman and first African American to appear on a major U.S. currency note.  Tubman, an escaped slave who helped to free others, will be featured on the front of the new $20 bill, replacing Andrew Jackson, the seventh U.S. president, a slaveholder.   Jackson’s image will be on the back of the re-designed $20 note.

“Harriet Tubman is not just a historical figure, but a role model for leadership and participation in our democracy,” Treasury Secretary Jacob J. Lew said April 20 when he announced the changes.

Tubman was born into slavery. After she escaped from slavery, Tubman returned to slaveholding states many times to help lead other slaves safely to Northern free states and to Canada. Later she fought for women’s right to vote.

The Treasury Department’s decision in 2015 to put a woman on a U.S. currency note has captivated the country.   The initial proposal was to put a woman on the $10 bill, which currently features a portrait of Alexander Hamilton, who helped create the U.S. banking system.    But Hamilton is now a wildly popular Broadway hip-hop musical about that Founding Father, from his early life an orphan in the Caribbean through his death (spoiler alert!) in a duel at the hands of Vice President (!!) Aaron Burr in 1804.

Department of Defense on Countering Extremism

26 April 2016  DoD’s Dunford Explores Ways to Better-Integrate Counter-Extremism Efforts  The chairman of the Joint Chiefs of Staff met with British Chief of Defense Staff Gen. Sir Nicholas Houghton and other defense leaders in London yesterday to look at broadening efforts against the Islamic State of Iraq and the Levant and other extremist groups.

Marine Corps Gen. Joe Dunford said he used the meetings to initiate a conversation with partners about a transregional approach to countering violent extremism.

Dunford has been speaking about the changing character of war since he has taken office. He believes, given the advances in technology and capabilities, that most threats will quickly become transregional — cutting across national boundaries and military domains.

He has been working to develop this transregional approach in the U.S. military and pointed to Special Operations Command as the example for what the rest of the military must do.

26 April 2016  U.S.-China Strategic and Economic Dialogue and U.S.-China Consultation on People-to-People Exchange To Be Held in Early June in Beijing, China   The U.S. Department of State and the U.S. Department of the Treasury today announced that the eighth session of the U.S.-China Strategic and Economic Dialogue (S&ED) will be held in Beijing, China, in early June.  The Dialogue will focus on the challenges and opportunities that both countries face on a wide range of bilateral, regional, and global areas of immediate and long-term economic and strategic interest.

26 April 2016  Department Supports Climate Capacity-Building Initiative for Transparency  The Department of State announces its intention to provide $15 million for the Capacity-Building Initiative for Transparency (CBIT) over the next three years, subject to appropriations. This initiative was first proposed by the United States and the European Union at the 21st Conference of the Parties to the UNFCCC (COP-21) in December 2015 in order to ensure that all countries will be prepared to meet the new, robust transparency requirements in the Paris Agreement.