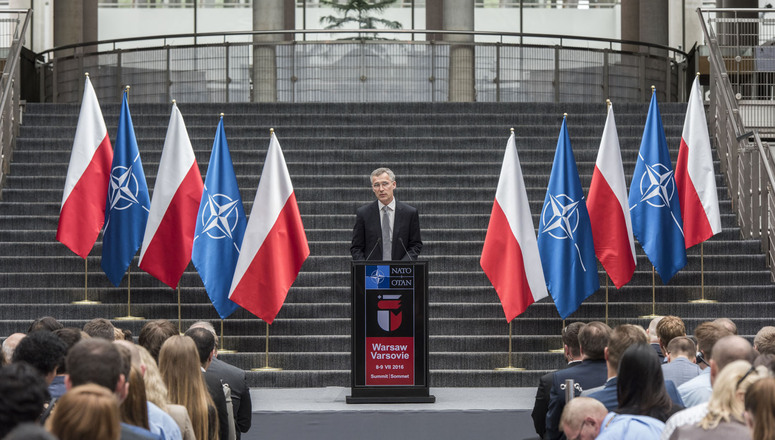 31 May 2016  NATO Secretary General previews Warsaw Summit in speech at Warsaw University   At the Warsaw Summit, the Alliance will also seek a new level of cooperation with its partners, especially the European Union, on issues such as countering hybrid threats, cyber defence and maritime security.

Mr. Stoltenberg noted that the Warsaw Summit will take place at a critical moment for the Alliance. “A moment where our security and our values face significant challenges. Challenges both from the east and the south”, he said.  At the Summit, NATO members will take the next steps enhancing a forward presence in the Eastern part of the Alliance, and projecting stability beyond NATO’s borders.

“Cooperation between NATO and the European Union – as demonstrated by our deployment in the Aegean Sea – gives a big boost to security in and around Europe”, Mr. Stoltenberg said.

With regard to projecting stability beyond NATO’s borders, the Deputy Secretary General said: “At the Warsaw Summit, we will intensify our efforts to project stability by boosting the defence capabilities and increasing the resilience of our partners”.

31 May 2016  Previewing the Strategic and Economic Dialogue with China  So the [Strategic and Economic Dialogue] really is the flagship dialogue or annual mechanism for connecting the work of our two governments, and over the last eight years we’ve used it to do two things: one, to set the goals and the direction of the relationship; but secondly, to help us work through and absorb some of the shocks to the system by allowing our teams to talk through, to think through, and to work through real problem areas.
…
Now, one of the adjunct meetings that go hand in hand with the Strategic Track is what we call the Strategic Security Dialogue, the SSD, which is headed on our side by Deputy Secretary of State Tony Blinken. And it includes representatives from the militaries on both sides, so it’s a civilian-military session. This gives us that integrated venue for communication on some of the thorniest strategic issues that we have to contend with. And as in the past, we expect the SSD will engage candidly, constructively, on issues like maritime behavior, like cyber, like North Korea, and so on.

27 May 2016 DoD’s Carter to Travel to Singapore for Asia Security Summit  Defense Secretary Ash Carter will travel to Singapore to lead the U.S. delegation and deliver a keynote address June 4 at the 15th Asia Security Summit at the Shangri-La Dialogue, an annual conference hosted by the International Institute for Strategic Studies, Pentagon officials announced today.

01 June 2016 Civilian Casualties in Fierce Battle for Fallujah   Civilian casualties are beginning to mount as the battle for the Islamic State-held city of Fallujah intensifies.  Iraqi forces have launched an offensive aimed at retaking the city.
At least 20,000 children are trapped inside the city, according to a statement released by the United Nations Children’s Fund (UNICEF). The organization has urged all parties to ensure the safety of these children who risk being recruited as child soldiers.

31 May 2016 Secretary Kerry to Host Our Ocean Conference in Washington, D.C. September 2016
U.S. Secretary of State John F. Kerry will host the third Our Ocean conference September 15-16, 2016, in Washington, DC. As in years past, Our Ocean 2016 will bring together heads of state, scientists, business leaders, NGOs, and others to tackle key issues including marine protected areas, sustainable fisheries, marine pollution, and climate-related impacts on the ocean. This year’s event, titled “Our Ocean, One Future,” will build on international commitments to protect the ocean made at the previous two conferences, and will partner with Georgetown University to engage the next generation of global ocean leaders.

31 May 2016 Latest Europe Travel Alert from the State Department

26 May 2016  The Impact of Blasphemy Laws Abroad  As-prepared remarks by Acting U.S. Special Envoy to the Organization of Islamic Cooperation,  Arsalan Suleman, before the Senate Human Rights Caucus, Washington, DC.