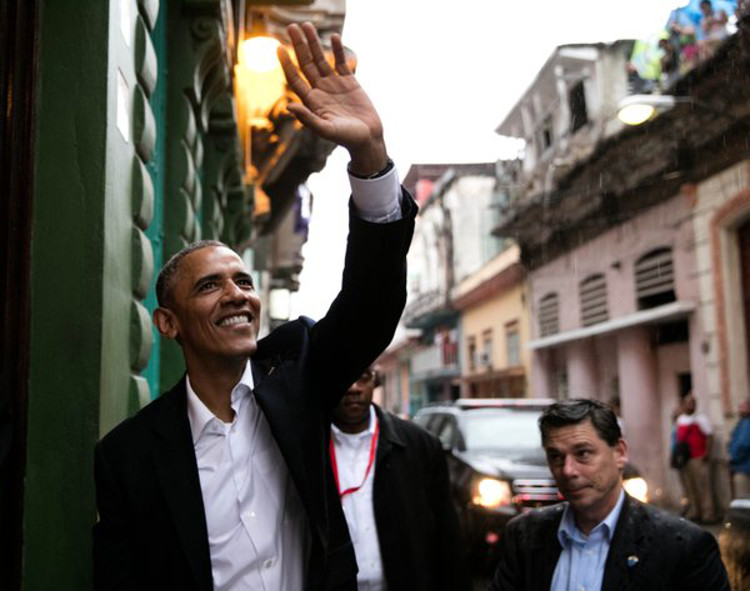 21 March 2016 - After nearly 90 years, an American President set foot on Cuban soil. President Obama waves to onlookers as he tours the capital of Cuba, Havanna.

21 March 2016  Remarks by President Obama and President Raul Castro of Cuba in a Joint Press Conference   ” I bring with me the greetings and the friendship of the American people.  In fact, I’m joined on this trip by nearly 40 members of Congress — Democrats and Republicans.  This is the largest such delegation of my presidency, and it indicates the excitement and interest in America about the process that we’ve undertaken.  These members of Congress recognize that our new relationship with the Cuban people is in the interest of both nations.  I’m also joined by some of America’s top business leaders and entrepreneurs because we’re ready to pursue more commercial ties, which create jobs and opportunity for Cubans and Americans alike.

And I’m especially pleased that I’m joined on this trip by so many Cuban Americans.  For them, and for the more than two million proud Cuban Americans across the United States, this is a moment filled with great emotion.  Ever since we made it easier to travel between our countries, more Cuban Americans are coming home.  For many, this is a time of new hope for the future.”

21 March 2016 Obama, Castro Praise Progress, Concede Major Differences   (VOA News)    U.S. President Barack Obama Monday hailed the progress in relations between the United States and Cuba, while acknowledging that the two sides continue to have “very serious” differences on democracy and human rights.  After “frank and candid” talks in Havana on ways to advance normalization efforts, Obama and Cuban President Raul Castro held a joint news conference.
“This is a time of hope for Cuba,” Obama told reporters.

21 March  2016  Fact Sheet: United States-Cuba Relationship   President Obama’s trip to Cuba marks a historic milestone in the normalization process between the United States and Cuba.  Since President Obama and Cuban President Raul Castro announced that the two countries would initiate a new era of relations 15 months ago, we have expanded cooperation across a range of areas for the benefit of the citizens of both the United States and Cuba.  We are advancing our shared interests and working together on complex issues that for too long defined – and divided – our relationship.  The President’s Cuba policy now allows us to more effectively improve the lives of the Cuban people, advance our interests and values, and build broader ties of cooperation across the Americas.

21 March 2016 Remarks by President Obama at an Entrepreneurship and Opportunity Event — Havana, Cuba

21 March 2016  State Department on the Departure of U.S. Special Envoy for Climate Change Todd Stern and the Appointment of Jonathan Pershing    “I’m pleased to announce that, upon Todd’s departure, Dr. Jonathan Pershing will become the U.S. Special Envoy for Climate Change. A trained scientist who has worked in government, in the private sector, and in the non-profit world, Jonathan has spent the past three years helping run the policy shop at the Department of Energy and serving as the senior climate advisor to Energy Secretary Ernie Moniz. Previously, Jonathan was also part of the Nobel prize-winning International Panel on Climate Change (IPCC), which has literally helped write the book on climate change and what we can do about it. Jonathan’s new role is a homecoming of sorts for him, as it follows his previous service at the State Department as Todd Stern’s deputy and his key role on the State climate negotiating team during the 1990s.”

21 March 2016 5 little-known facts about first lady Michelle Obama  First lady Michelle Obama has been steadily in the public eye for eight years. In the United States, she is especially famous for advocating healthy eating habits, championing organic gardening, and speaking on behalf of military and working families. But there is a lot more to discover about the woman President Obama calls “my rock.”