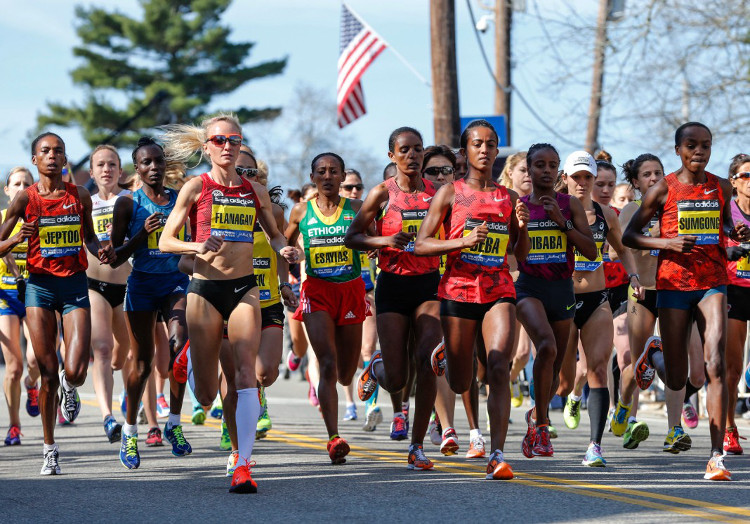 Elite female runners from around the world compete in the 2014 Boston Marathon. (AP Images)

19 April 2016 Statement by the Press Secretary on the President’s Travel to the United Kingdom   As part of the President’s upcoming travel to the United Kingdom, First Lady Michelle Obama will join President Obama for a private lunch hosted by Her Majesty Queen Elizabeth II and His Royal Highness the Duke of Edinburgh at Windsor Castle on April 22. The Duke and Duchess of Cambridge and Prince Harry will host the President and First Lady for a private dinner at Kensington Palace that evening.
As previously announced, the President’s visit will also include a bilateral meeting and joint press conference with Prime Minister David Cameron at Number 10 Downing Street. The visit will allow the President to coordinate on today’s most pressing international challenges with one of our closest allies and to offer his gratitude to the British Government and people for their stalwart partnership with his Administration and the American people throughout his Presidency.

18 April 2016   Women at the Boston Marathon: From bystanders to top competitors   When 30,000 runners lace up and await the starting gun at this year’s Boston Marathon on April 18, close to half will be women.

But just 45 years ago, women could not run this race, one of the oldest and toughest in the world. Much has changed for women runners at Boston and around the globe.

In 1966, Roberta “Bobbi” Gibb concealed her face with a hoodie and hides in bushes near the starting line.  Less than ten years later, in 1972, women were officially allowed entry to the race.

See also: Statement by Assistant to the President for Homeland Security and Counterterrorism Lisa Monaco on the 3rd Anniversary of the Boston Marathon Bombings

18 April 2016 Kansas: Sunflowers, sleek jets and civil rights   The prairie state of Kansas is endless wheat fields and the explosion of sunflowers in August. It played a pivotal role in the struggle to abolish slavery and, a century later, to end school segregation. It’s a hub for builders of sleek business jets and, in the past, military behemoths.

Kansas is Middle America, the place from which a fictional tornado lifted a farm girl, Dorothy, and deposited her in Oz and to which she happily returned at the end of her adventure.

The Brown v. Board of Education National Historic Site in Topeka commemorates the end of school segregation. Linda Brown’s family brought the suit that led to the monumental 1954 Supreme Court decision.

19 April 2106 Iran, US at Odds Over Nuclear Sanctions Relief   Iran’s concerns about its perceived lack of sanctions relief and Syria’s faltering political talks will be focal points for Secretary of State John Kerry when he sits down for talks Tuesday with his Iranian counterpart.

Kerry and Iranian Foreign Minister Mohammad Javad Zarif will meet in New York, at the start of a trip for Kerry that will include stops in Egypt and Saudi Arabia.

Iranian officials have complained that their country is not getting the sanctions relief specified in the Joint Comprehensive Plan of Action (JCPOA), the landmark nuclear agreement that was implemented in January.

Work and Dunne spoke with U.S. and British service members stationed at Marine Corps Air Station Beaufort assigned to an F-35B joint strike fighter training squadron. During the visit, they discussed the aircraft’s capabilities and interoperability, as well as the training pipeline for both U.S. and United Kingdom personnel, she said.