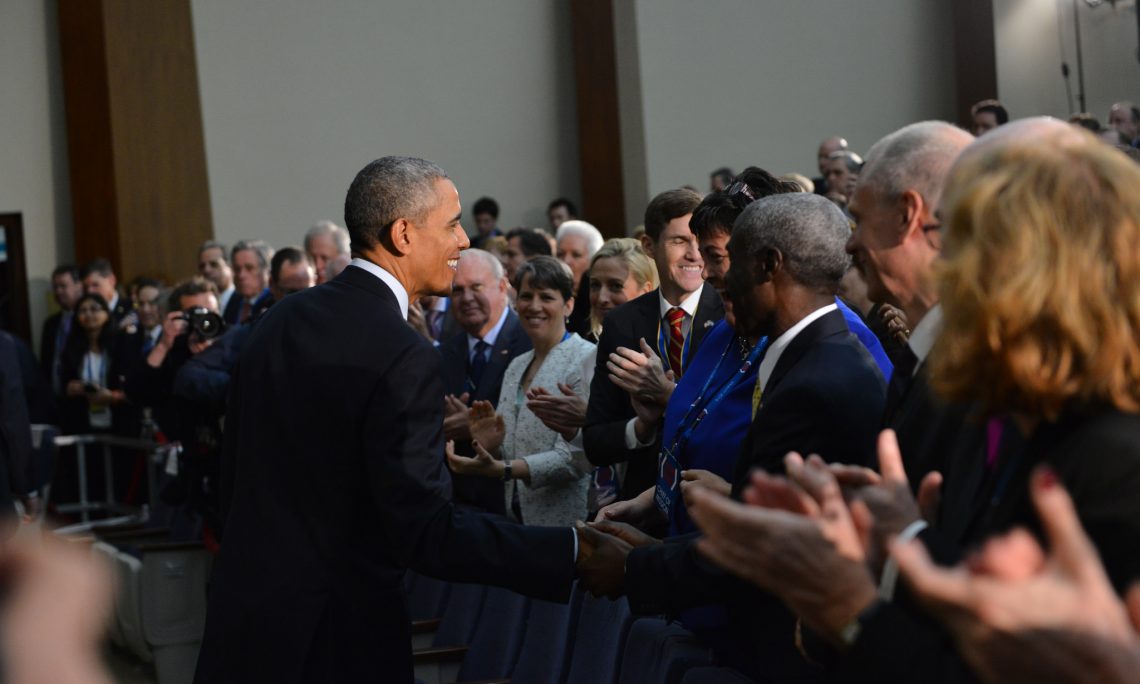 They discussed President Putin’s announcement today of a partial withdrawal of Russian forces from Syria and next steps required to fully implement the cessation of hostilities with the goal of advancing the political negotiations on resolution of the conflict.  President Obama welcomed the much-needed reduction in violence since the beginning of the cessation, but stressed that continuing offensive actions by Syrian regime forces risk undermining both the Cessation of Hostilities and the UN-led political process.

14 March  2016 Remarks by the President at Chief of Missions Conference (COM)   “I’m not here to give a big speech.  I wanted to come by and mainly just say thank you.  I want to reiterate what I say at every embassy that I visit to your entire time, and that is that you are doing extraordinary work on behalf of America.  And because of you, we are safer and more secure, and America’s reputation around the world is extraordinarily strong.

More broadly, I want to thank you for your partnership in what’s been a priority for us, and that is renewing American leadership.  I believe that a broader vision of American strength that harnesses all elements of our national power, including diplomacy, is what is going to make a difference in this complicated age that we live in.  That’s how we build a global coalition to deal with Iran — strong sanctions plus diplomacy.  And under the nuclear deal, Iran will not get its hands on a nuclear weapon.”

14 March 2016 Obama: U.S. Diplomats, Military Must Partner to Confront Threats   All aspects of government have a responsibility to keep America safe and secure, and diplomacy — like military power — has a role to play in the fight against terror, President Barack Obama said at the State Department.  The president spoke at the department’s chiefs of mission conference. Chiefs of mission are the highest-ranking U.S. representatives in American embassies.

The president told the chiefs that they have a role to play in the effort against the Islamic State of Iraq and the Levant. “We’re going to have to continue to strengthen our global coalition against ISIL, whether it’s the air campaign, support for local partners, cutting off ISIL financing, preventing the flow of foreign terrorist fighters, working with partners to counter ISIL’s bankrupt, nihilistic ideology,” the president said.

He said diplomacy is crucial because it is the only way the Syrian civil war is going to end. A peace settlement in Syria will go a long way to ending the tyranny of ISIL in the self-proclaimed caliphate, he added.

14 March 2016  Secretary Kerry to Launch U.S. Strategy on Adolescent Girls  U.S. Secretary of State John Kerry will launch the U.S. Global Strategy to Empower Adolescent Girls in the Bill Burns Auditorium of the George C. Marshall Center at the U.S. Department of State on March 15.   Secretary Kerry will be introduced by U.S. Ambassador-at-Large for Global Women’s Issues Catherine Russell. A panel discussion featuring representatives from USAID, Peace Corps, the Millennium Challenge Corporation, and PEPFAR will follow the Secretary’s remarks. Assistant to the President, Chief of Staff to the First Lady, and Executive Director of the Council on Women and Girls Tina Tchen will offer closing remarks.

The strategy will bring together USAID, Peace Corps, the Millennium Challenge Corporation, and the State Department, including PEPFAR, to tackle issues facing adolescent girls, including health, safety, and education.

14 March 2016 Assistant Secretary William R. Brownfield Travel to Vienna, Austria, for the 59th UN Commission on Narcotic Drugs     Assistant Secretary of State for International Narcotics and Law Enforcement Affairs William R. Brownfield and National Drug Control Policy Director Michael Botticelli are co-leading the U.S. delegation to the 59th session of the Commission on Narcotic Drugs (CND) March 14-22 in Vienna, Austria. The CND is the premier policymaking body of the international community within the United Nations system for drug issues and has member states from around the world. This CND meeting is particularly notable in that it will pave the way toward a major United Nations General Assembly Special Session on international drug policy to take place April 19-21 in New York, the first such global meeting since 1998.