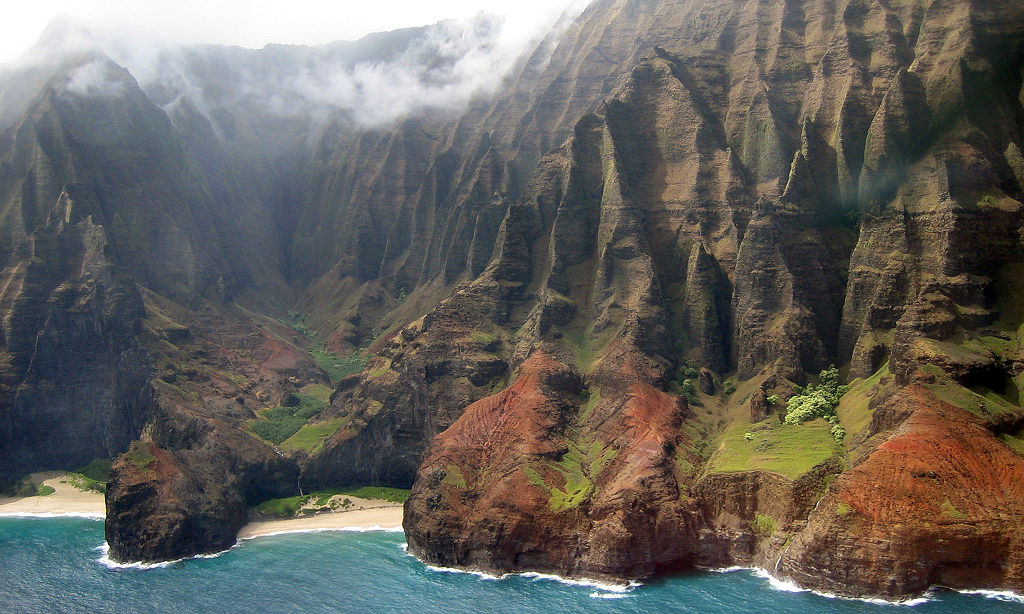 05 April 2016  Hawaii: Pearl Harbor, the perfect wave and volcanoes  Hawaii is America’s tropical paradise, a favorite destination for honeymooners, surfers, golfers and hikers.   This archipelago of eight islands was formed by volcanoes millions of years ago. Trade winds warm it day and night, and the air is fragrant with orchids and other flowers, including those in leis draped around visitors’ necks.

It is rich in mythology and historical events, a place where warrior tribes fought and worshipped Pele, the goddess of fire, and where Kilauea, the world’s largest active volcano, still sends spectacular lava flows seaward.

It is by far the most diverse U.S. state, with a population almost two-fifths Asian and nearly a quarter multiracial   The Aloha State — “Aloha” is Hawaiian for both hello and goodbye — is famous for feasts called luaus, hula dancers and ukulele-strumming musicians in colorful shirts.

President Obama announced the SelectUSA initiative to showcase the United States as the world’s premier business location and to provide easy access to federal-level programs and services related to business investment. SelectUSA is designed to complement the activities of our states—the primary drivers of economic development in the United States.  Find out how the U.S. Commercial Service UK can help you invest in the U.S.

On the SelectUSA website, state economic development agencies and businesses — foreign and domestic — will find the information they need to better understand the complete value proposition offered to firms located in the United States.

05 April 2016  Secretary Kerry’s Remarks at Bloomberg New Energy Finance Summit   “Now, today we know – after decades of science, thousands of peer-reviewed studies – to which I might add there are scant, if any, legitimate peer-reviewed studies to the contrary.  But the peer-reviewed studies in the thousands – more than 5,000 – indicate that, unless we transition away from the sources of Edison’s time to these low-carbon alternatives, we are going to self-inflict harm to infrastructure, food production, water supplies, ecosystems, health – potentially to life as we know it on this planet.  And the fact is, when we talk about the future of energy, we are actually talking about the future of everything.
…
The private sector is today demonstrating an extraordinary commitment to transforming global energy use.  And it is because of your leadership that I am so confident about the future.  Make no mistake; it’s not going to be the government alone that gets us there, as I said.  It’s going to be innovators, workers, entrepreneurs, those of you who’ve been hammering away at this challenge for many years, and frankly, because of that, who have, without a lot of incentive heretofore, compressed the cost pricing now to where it is almost competitive.”

05 April 2016 Letter from the President — Fiscal Year 2017 Budget Amendments   “I ask the Congress to consider the enclosed Fiscal Year (FY) 2017 Budget amendments for the Departments of Agriculture, Defense, Education, Homeland Security, State and Other International Programs, and Transportation, as well as the National Aeronautics and Space Administration, the Public Defender Service for the District of Columbia, the Surface Transportation Board, and the U.S. Holocaust Memorial Museum. Also included is an amendment to a general provision included in Title VI of the Financial Services and General Government Appropriations Act, 2016, that would affect the Federal Trade Commission. Theseamendments are necessary to reflect correctly policies assumed in my FY 2017 Budget.”

05 April 2016 Possible Push to Elevate US Cyber Command in Fight vs Islamic State  Washington’s top cyber warrior said Tuesday that the time has come to elevate the status of U.S. Cyber Command, arguing the move would make efforts more effective against a variety of threats, including the Islamic State (IS) terror group.

“A combatant commander designation would allow us to be faster, which would generate better mission outcomes,” Cyber Command’s Admiral Michael Rogers told members of the Senate Armed Services Committee.

U.S. Cyber Command is a branch of the armed forces that centralizes command of cyberspace operations and defends the information security environment. Upgrading it to combatant command would put it on par with the most powerful institutions in the Defense Department.

Established in 2009, Cyber Command became fully operational in 2010, but has been focused on providing support to nine main unified commands, most of which are organized along areas of geographic responsibility, such as Central Command (CENTCOM), which oversees U.S. military operations against IS in the Middle East and South Asia.

05 April 2016  Coalition Airstrike Destroys ISIL Headquarters Compound in Mosul   A U.S.-led coalition airstrike took out an Islamic State of Iraq and the Levant headquarters compound in Mosul, Iraq, yesterday morning, a Pentagon spokesman said today.  Navy Captain Jeff Davis told reporters that ISIL operatives took over the former Turkish consulate in Mosul in June 2014, claiming it as one of its headquarters.

Defeating ISIL was at the top of the agenda. “We agreed that one of the most important functions that NATO is performing and can continue to perform is to help in the training and assisting process for troops in Iraq, in Jordan, in many of the areas in the region,” Obama said during a joint news conference with Stoltenberg.

The president also said the alliance is looking at potential operations in areas such as Libya where ISIL has gained a foothold, but where the “beginnings of a government” would mean allies on the ground. “We can, I think, provide enormous help in helping to stabilize those countries,” Obama said.

The Goldwater-Nichols Act of 1986 is an important piece of legislation that solidified the chain of command and reinforced the concept of “jointness,” Carter said at the Center for Strategic and International Studies.

In remarks that focused on updating the legislation, the secretary called for clarifying the role and authority of the chairman of the Joint Chiefs of Staff, adapting combatant commands to new functions, streamlining acquisition, and making changes to joint personnel management.

“This year, as Goldwater-Nichols turns 30, we can see that the world has changed,” Carter said. “Instead of the Cold War and one clear threat, we face a security environment that’s dramatically different from the last quarter-century.”

In some cases, he said, the “pendulum between service equities and jointness may have swung too far,” such as not involving the service chiefs enough in acquisition decision-making and accountability.

“It’s time that we consider practical updates to this critical organizational framework, while still preserving its spirit and intent,” he said.

What is a contested convention?   Most simply, it means that no candidate arrives with the support of a majority of delegates, and the party’s nomination for the presidency remains in doubt.
That hasn’t happened since 1952, although it used to be much more common.

Today, one candidate typically emerges from the series of state caucuses and primary elections as the favorite and captures a majority of delegates well before the convention begins.   But if no candidate wins a majority on the first ballot, the delegates keep voting until one does.

On subsequent ballots, fewer states require delegates to uphold their “pledge” to a given candidate. So delegates can shift allegiances to other candidates.
See also:  FAQs on Political Conventions