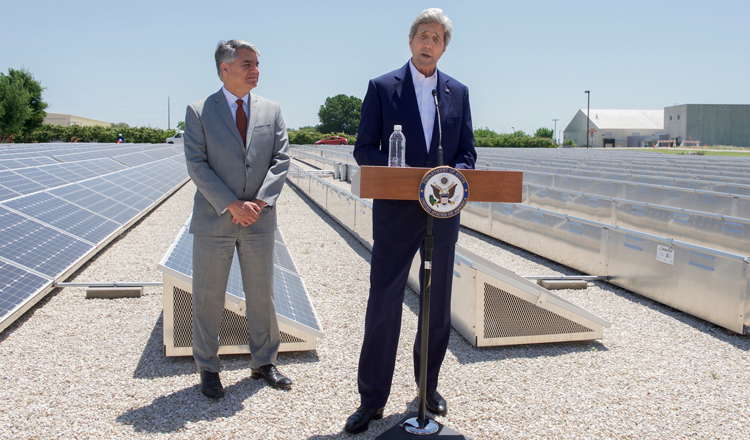 27 April 2016 The USA is still a birthplace for jazz greats  Rock, rap and hip-hop may rule the charts, but jazz, with roots in the spirituals of African-American slaves, is still America’s gift to the world.

“There is no better example of democracy than a jazz ensemble: individual freedom but with responsibility to the group,” a primer from the Thelonious Monk Institute of Jazz explains.

Our sister site, ShareAmerica, has the full story plus videos to jazz greats.

“Thank you so much for joining us as we start the 100 Day Countdown to the thrilling moment when we let the games begin.  I’m really honored to be here today.”

“We are already witnessing the impacts of climate change in many different ways: increased droughts; increased numbers and greater intensity to fires; changes in our oceans’ temperature, and therefore in the stocks of fish and movements of fish which provide enormous protein to people all around the world; changes in species habitat, species that are moving from one location to another, whether in the ocean or on the land. The – we’re seeing change in agriculture, what grows where. And we’re seeing, profoundly disturbingly, changes in the available water and water supplies, which has affected the movement of people, so we have what are called climate refugees as a growing challenge in terms of public policy.

But the Paris agreement is not in and of itself a solution to all of this because it doesn’t guarantee we will keep the global temperature from rising above 2 degree centigrade, which scientists tells us is the tipping point, is the critical number.”

27 April 2016 Statement by the Small Group of the Global Coalition to Counter ISIL.

“We welcome the momentum we have witnessed in recent months against Daesh in Iraq and Syria. Daesh continues to lose territory as well as control of strategic resupply routes and resources. When we last met in Rome in February, Iraqi Security Forces had seized Ramadi. They have now advanced up the Euphrates River Valley, liberating Hit and pressing on to end the Daesh siege of Haditha. They are attacking Daesh simultaneously in Anbar and Ninewa provinces. Since the Rome conference, Shaddadi, a critical Daesh supply route between Raqqa and Mosul has been retaken from Daesh, the al-Tanf crossing point on Syria-Iraq border was cleared of Daesh elements, and moderate Syrian opposition forces liberated additional towns along the border with Turkey. Daesh has retreated in other areas of Syria, as well.”

27 April 2016 Take a moment to have a look at the fantastic photographs from President Obama’s recent overseas visit to Saudi Arabia, the United Kingdom and Germany, taken by the President’s  photographer, Pete Souza,