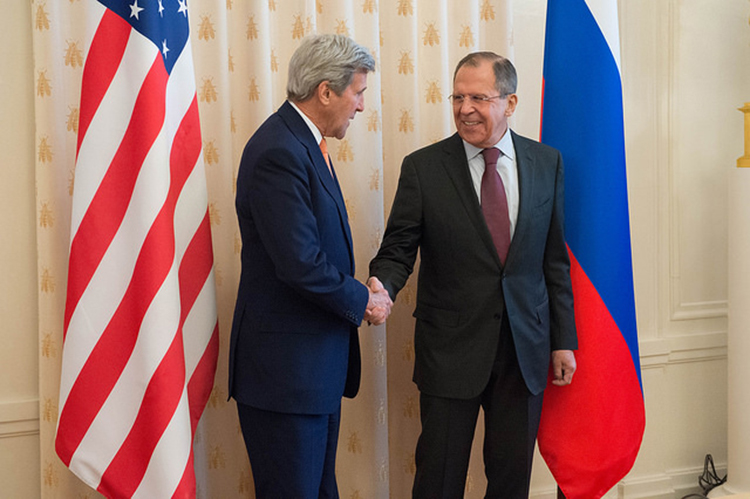 Secretary Kerry will travel to Brussels, Belgium, on Friday to formally express the condolences of the United States for the loss of life in yesterday’s terrorist attacks, and to meet with Belgian and European Union officials. He will reiterate the strong support of the United States for Belgian efforts to both investigate these attacks and continue contributing to international efforts to counter violent extremism. The Secretary will be arriving from Moscow, where he expects to discuss a range of bilateral and regional security issues with President Putin and other Russian officials.

24 March 2016 Remarks by Secretary Kerry Before Meeting With Russian Foreign Minister Sergey Lavrov in Moscow  ” Well, Sergey, thank you very much. First of all, thank you for welcoming me back to Moscow, and indeed, this is my third visit. And I think it’s fair to say that each of the visits that I’ve had and (inaudible) have permitted us to be able to find some path forward – not always as far as we would like, but we have made progress in trying to deal with some very difficult challenges.

I think it’s fair to say that a few weeks ago, there were very, very few people who believed that a cessation of hostilities was possible in Syria. You and I have served as co-chairs of the Ceasefire Task Force. Russia and the United States have worked very closely together, along with our allies and countries in the International Syria Support Group, and it is undeniable that the result of that work has produced some progress. There has been a fragile but nevertheless beneficial reduction in violence – some say as much as 85 to 90 percent – in Syria. It’s also true that the cessation in hostilities has produced the first significant flow of humanitarian assistance to people, some whom haven’t seen that assistance in several years. But we both know that more needs to be done in terms of both a reduction of violence and the flow of humanitarian aid.”

Kerry said before his talks with Lavrov that “many people” are hopeful that the talks in Moscow can help bring the conflict in Syria to an end as fast as possible. He also said he hoped for cooperation from Russia in dealing with other conflicts, namely those in Yemen and Libya and the Middle East peace process.

“As the President indicated, we just had an excellent conversation.  And I can tell you that President Macri is a man in a hurry.  I’m impressed because he has moved rapidly on so many of the reforms that he promised — to create more sustainable and inclusive economic growth, and to reconnect Argentina with the global economy and the world community.  And today, in a show of confidence in Argentina’s new direction, many U.S. businesses are announcing tens of millions of dollars in new investment here in Argentina, which can be part of the broader package of investment that can lead to new jobs and economic growth here in this country.”

23 March 2016 Joint Statement by Secretary Kerry and Foreign Minister Susana Malcorra of the Republic of Argentina in support of the Organization of American States and the Inter-American Human Rights System  The United States and the Republic of Argentina renew their support for the Organization of American States (OAS) and the Inter-American Human Rights System. They note that their active engagement at the OAS is essential to advancing the shared values and goals of all member states.

23 March 2016 Remarks by the First Lady on Let Girls Learn initiative to Argentine High School Students “…women here in Argentina and in the U.S. face so many of the same struggles.  We struggle to be paid equally for our work.  We struggle to balance the needs of our family with the demands of our jobs.  We struggle to stop domestic violence and abuse, terrible crimes that have no place in any country on this planet.