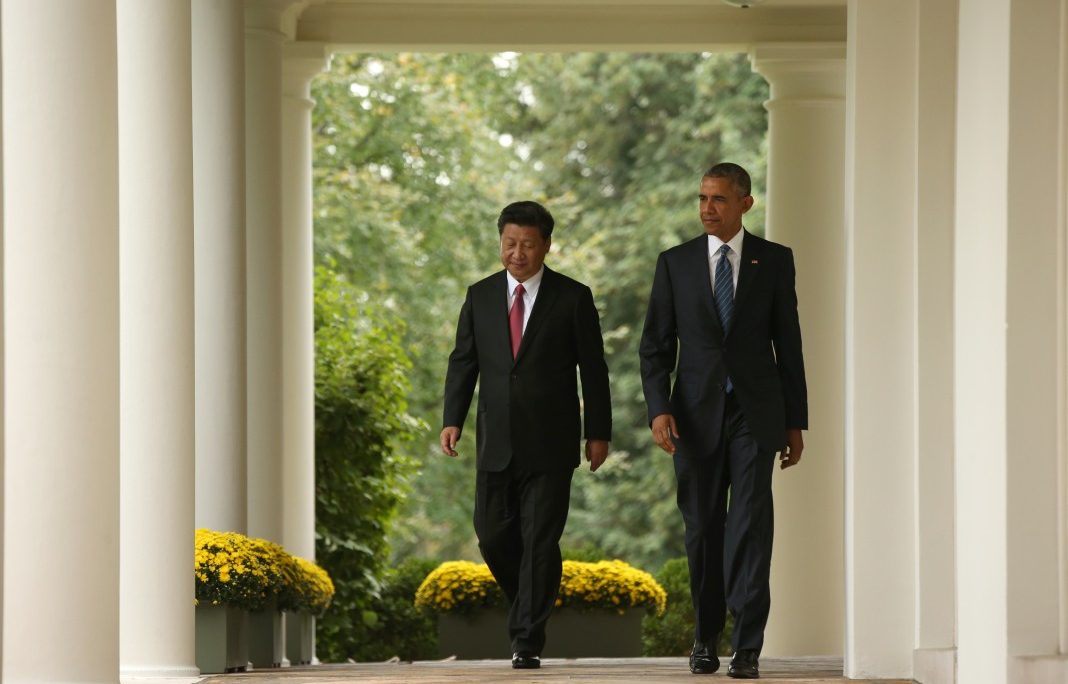 President Obama and President Xi Jinping of China walk along the Colonnade of the White House on September 25, 2015. (© AP Images)

Apr 20, 2016 Presidents Obama, Xi forge ahead on climate The U.S. and China will sign the Paris Agreement on climate change on Earth Day, April 22, the first day that governments are permitted to put their signatures to the landmark accord.The leaders of the world’s two largest economies already are looking ahead: President Obama and President Xi Jinping have agreed to formally join the agreement as early as possible this year, and to work together on significant climate change actions, including reducing emissions from airplanes and other issues not covered by the Paris Agreement.

Obama and Xi also plan to press the leaders of the world’s leading economies on climate action at the G20 meeting September 4–5 in Hangzhou, China.

20 April 2016 Senior State Department Official on the Paris Agreement Signing Ceremony On Friday, the Paris agreement on climate change will be open for signature. Secretary Kerry is going to join a record number of global leaders in signing the agreement, bringing it a step closer to entering into force.

Last December, the world came together really in unprecedented ways to speak with a single voice in adopting the Paris agreement. And for the first time, we have an ambitious, durable regime – it’s fair; it applies to all countries; it moves us beyond the categories of developed and developing that are really outmoded.

The swift action by so many countries – every climate, every size, every economy – is really a testament to the undeniable momentum coming out of Paris, and it’s spurring not only swift action on the Paris agreement itself but really continued progress on our collective efforts to move to clean energy, to low carbon, to a climate-friendly future.

20 April 2016 Secretary of State John Kerry Remarks After Meeting With Egyptian President Abdel Fattah al-Sisi   We talked in a very serious and very constructive way about the challenges that Egypt is facing, and I want to emphasize that the United States views Egypt as critical to the peace and security of the entire region.  We care enormously about the – about succeeding in overcoming the difficult challenges that Egypt faces at this moment, both in terms of security, the challenge of extremists who engage in activities that create instability and attack the peace and security of all citizens everywhere, and also the challenge of an economy that needs to see greater investment, more job creation, and growth.

The United States wants to help in those endeavors, and in furtherance of that, I will come back with additional thoughts about ways in which we can work together to invigorate the economy, to attract investment, to create jobs, and also ways that we can work together in order to deal with Daesh particularly and to help Egypt in terms of the security concerns that it has today.

We talked, of course, about politics, about Syria, about Libya, where there are real challenges and where Egypt is being enormously helpful.  We have mutual interests in the security of the region.  And we also talked about ways in which we can hopefully resolve some of the differences and questions that have arisen about the internal politics and choices for the people of Egypt.

20 April 2016 Briefing by Special Envoy for the Human Rights of LGBTI Persons Randy Berry   It’s been just a little over a year ago that the Secretary announced the creation of a new position here at the State Department: the Special Envoy for the Human Rights of LGBTI Persons. And this marked a first – not only a first for the U.S. Government, but really a first for any government in any part of the world. And the position’s formation really signified two key realities: First, that the persecution and marginalization of LGBTI persons is a longstanding and deep-seated problem in so many parts of the world. And second, as the Secretary said the day he swore me in a year ago in the Ben Franklin Room here in the building, the United States remains unwavering in our commitment to advance the human rights of all human beings, including LGBTI persons. It’s not just because it’s a moral necessity, which it is, but also because it’s a strategic imperative for the United States.