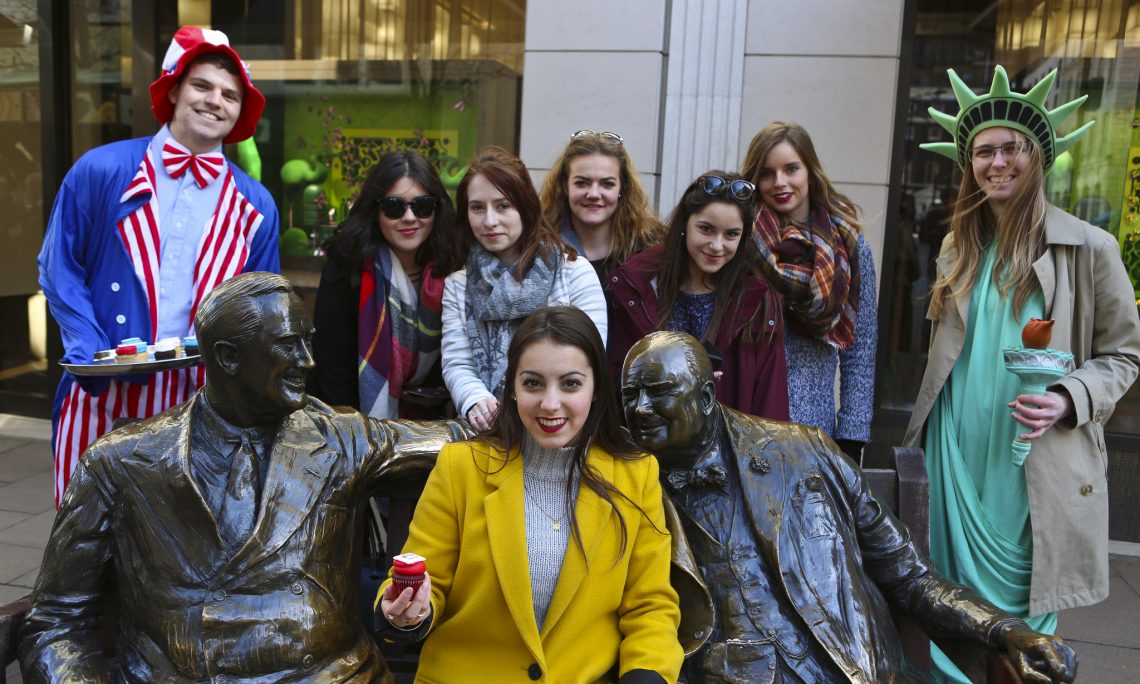 Celebrating 70 years of the Special Relationship

70 Years of the Special Relationship

To help celebrate 70 years of the Special Relationship, “Lady Liberty” and “Uncle Sam” hand out cupcakes. What better place to do so than the Franklin D. Roosevelt and Winston Churchill bronze statues, sitting on a bench in Mayfair, London!   You can view them and some friends on our Flickr photostream!   Or see #specialrelationship on Twitter.

On the Passing of Nancy Reagan

06 March 2016 Statement by the President and the First Lady on the Passing of Nancy Reagan  (whitehouse.gov)  ” Nancy Reagan once wrote that nothing could prepare you for living in the White House. She was right, of course. But we had a head start, because we were fortunate to benefit from her proud example, and her warm and generous advice. … We offer our sincere condolences to their children, Patti, Ron, and Michael, and to their grandchildren. And we remain grateful for Nancy Reagan’s life, thankful for her guidance, and prayerful that she and her beloved husband are together again.”

06 March 2016 Statement by the Vice President and Dr. Jill Biden On the Passing of Nancy Reagan  “Nancy Reagan defined grace, courage, and loyalty. An accomplished actress, First Lady of California, and First Lady of the United States, she understood public service is a noble endeavor. She was a strong voice to keep children safe from drugs, and she reached out to give comfort to fellow cancer survivors, communities touched by gun violence, and families as they cared for a loved one on the lonely walk of Alzheimer’s. … Jill and I offer our deepest condolences to Patti, Ron, Michael, and the entire Reagan family.”

06 March 2016 Secretary Kerry On the Passing of Nancy Reagan (state.gov)  “Teresa and I join the nation in mourning the passing of Nancy Reagan, a woman whose grace, dedication and love ‎of family were inspirations to us all.  President Reagan was one of our country’s greatest optimists, whose courage and foresight helped win the Cold War, and Nancy was his partner and confidante, helping guide him through his years in public office and beyond.”

04 March 2016 Keynote Speech by Ambassador Adam Scheinman to the 2016 Deterrence and Assurance Conference  (state.gov)  “Allow me to open with two bottom lines.   The first is that a CTBT ratified by the United States and in force globally is in the U.S. national security interest. We can maintain a reliable deterrent without nuclear testing, the treaty is effectively verifiable, and it will constrain nuclear weapon programs in other countries. The benefits are evident and outweigh any perceived risks.
The second is that we are realistic about prospects for U.S. ratification and have no set timeframe for pursuing the Senate’s advice and consent. Instead, our aim is to re-introduce CTBT to the American public and generate discussion on the treaty and its merits.”

07 March 2016 U.S. continues support for Iraqis displaced by conflict (ShareAmerica)  The United States is committed to working with partners in Iraq to provide humanitarian assistance to over a million displaced and conflict-affected Iraqis throughout the country.   An additional $20 million in emergency food assistance for Iraq shows America’s long-term dedication to help the Iraqi people. The new funding comes through USAID and helps the U.N. World Food Programme  reach 1.5 million Iraqis with food aid.

04 March 2016 Iraqi Forces Preparing for Mosul Assault, Operation Inherent Resolve Spokesman Says  (defense.gov)  With coalition support, Iraqi security forces are preparing for the assault to reclaim the key city of Mosul from the Islamic State of Iraq and the Levant, an Operation Inherent Resolve spokesman said today.  Speaking to Pentagon reporters via teleconference from Baghdad, Army Col. Christopher Garver said the Mosul assault will happen in the coming months on the timeline of the Iraqis, as they are the ones planning the operation.

04 March 2016 Chairman of the Joint Chiefs of Staff General Dunford Discusses State of Middle East With Israeli Leaders  (defense.gov)   Marine Corps General Joseph Dunford Jr. met with Lt. General Gadi Eisenkot, the chief of the Israeli Defense Forces, and Defense Minister Moshe Yaalon.  “They have a unique perspective on the region — a unique perspective on the challenges we have in Syria, in particular,” Dunford said during an interview.     The chairman also wanted to hear about Exercise Juniper Cobra, a major U.S. European Command exercise that included 1,700 U.S. service members. The ballistic missile defense exercise used computer simulations to train U.S. and Israeli military personnel. The exercise has been held every other year since 2001, Eucom officials said.

04 March  2016 Remarks by the President on the Economy “This morning, we learned that the U.S. economy had created 242,000 jobs last month.  That’s two months in a row at the unemployment rate of below 5 percent.  And over the past three months, our workforce has grown by 1.5 million people.  That is progress.  Overall, America’s business has now created new jobs for 72 straight months, six straight years of job creation — 14.3 million new jobs. ”