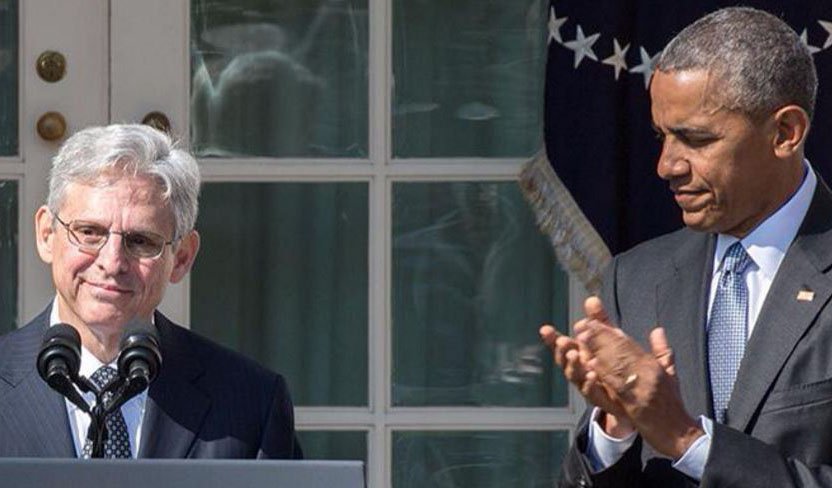 16 March 2016 Remarks by the President in Conference Call with Stakeholders  “As you now know, I nominated Chief Judge Merrick Garland of the D.C. Circuit to serve as the next associate justice on the Supreme Court.  This is not a decision I ever take lightly.  I’ve now seated two Supreme Court justices; this would be the third.

I chose Chief Judge Garland because this guy is as well-qualified as anybody who’s ever been nominated to the Supreme Court.  That’s not just my opinion, that’s pretty much a universal opinion.  He possesses one of America’s sharpest legal minds.  He brings a spirit of decency and modesty and integrity and even-handedness to his work.  His work is excellent.  He is somebody who has worked as a prosecutor.  As you know, he is somebody who not only helped lead the investigation around the Oklahoma City bombings, but did so in a way that showed enormous compassion towards the people who had been impacted.

He’s been praised by Republicans and Democrats. During his original confirmation process when he was put on the D.C. Circuit, majorities of each party supported him.  Republican Senator Orrin Hatch, who has been the Chairman of the Judiciary Committee, said, In all honesty, I would like to see one person come to this floor and say one reason why Merrick Garland does not deserve this position.”

16 March 2016 Secretary Kerry’s Remarks on Daesh and Genocide   “In 2014, the terrorist group Daesh began to seize territory in Syria and Iraq, overrunning major cities and committing atrocities. The United States responded quickly by denouncing these horrific acts and – more importantly – taking coordinated actions to counter them. In September of that year, President Obama mobilized an international coalition, now 66 members strong, to halt and reverse Daesh’s momentum.
…
My purpose in appearing before you today is to assert that, in my judgment, Daesh is responsible for genocide against groups in areas under its control, including Yezidis, Christians, and Shia Muslims. Daesh is genocidal by self-proclamation, by ideology, and by actions – in what it says, what it believes, and what it does. Daesh is also responsible for crimes against humanity and ethnic cleansing directed at these same groups and in some cases also against Sunni Muslims, Kurds, and other minorities.
…
Part of our response to Daesh must, of course, be to destroy it by military force, but other dimensions are important as well, and we dare not lose track of that. In the past two and a half years, the United States has provided more than 600 million in emergency aid to Iraqis who have been displaced from their communities by Daesh. We are working closely with local authorities to assist in the recovery of cities that have been liberated and whose residents face grave challenges – both material and psychological – and people who desperately need help in rebuilding their lives. We are funding the investigation of mass graves, and supporting care for the victims of gender-based violence and those who have escaped captivity.”

16 March 2016  State Dept. On North Korea’s Reported Missile Launch  We have seen reports that North Korea launched a ballistic missile into the Sea of Japan.  We are closely monitoring the situation on the Korean Peninsula….The United States remains steadfast in its commitments to the defense of its allies, including the Republic of Korea and Japan. We will continue to coordinate closely with our allies and partners in the region.

State Department, Office of the Historian

Cold War flashpoints and disputes during this period included: the Soviet occupation of Afghanistan; the potential Soviet invasion of Poland; the possibility that the Reagan administration would act to delay Soviet construction of a Siberian gas pipeline to Western Europe; the execution of NATO’s 1979 “Dual Track Decision”; the implementation of a strategic modernization program on the part of the United States; and Soviet meddling in Central America and the Middle East. Additionally, three cases of Soviet human rights abuses drew and sustained President Reagan’s personal attention: Anatoly Shcharanskiy, Andrei Sakharov, and a group of Siberian Pentecostals living in the basement of the U.S. Embassy in Moscow.