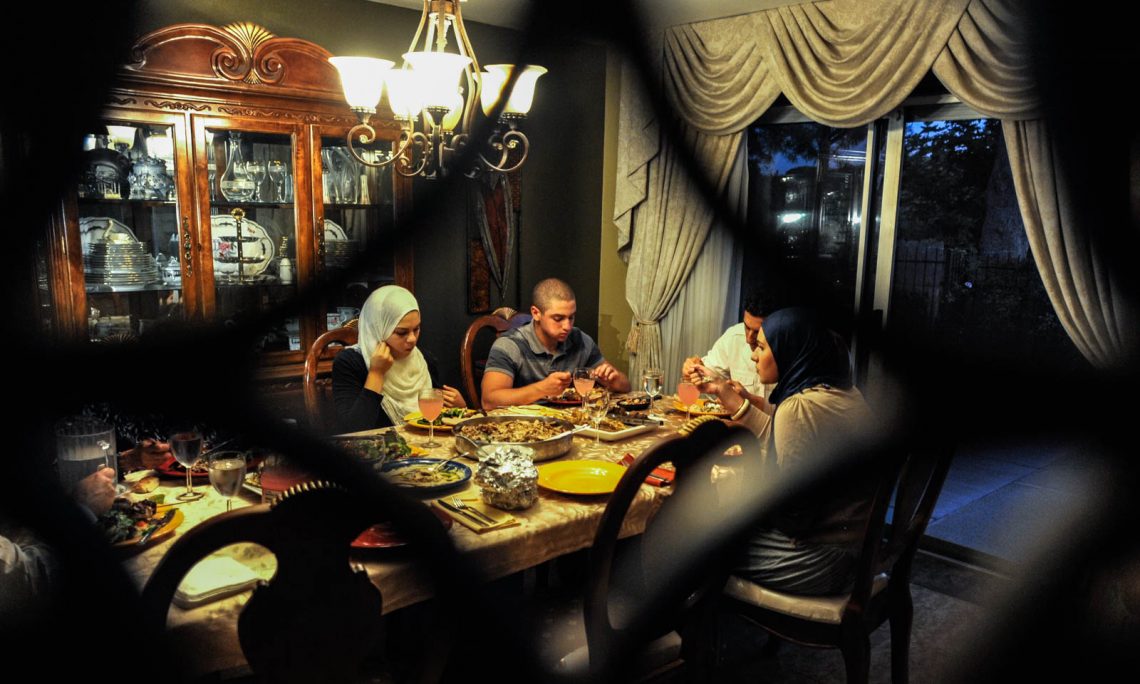 A family breaks the Ramadan fast at their home in California. (© AP Images)

05 June 2016 The White House Office of the Press Secretary Statement by the President on the Occasion of Ramadan
As another new moon heralds the start of the holy month of Ramadan, Michelle and I extend our best wishes to Muslims across the United States and around the world.

05 June 2016 On the Occasion of Ramadan, Press statement John Kerry Secretary of State
Ramadan is a cherished month in Islam. It is a sacred period of prayer and fasting, offering hospitality, and remembering those who are less fortunate.Through our embassies and consulates around the world, we recognize these important values through Ramadan events, which demonstrate our commitment to promoting social cohesion, diversity, and welcome within our communities.

During this month of peace and renewal, we wish the 1.6 billion Muslims around the world a joyful Ramadan Kareem.

03 June 2016 Ramadan in America: The same, but different  “What is Ramadan like in America?” For American Muslims, like Muslims everywhere, it is a time to reconnect with God by observing fasts and through personal reflection and an increase in prayers and charity.
Most Islamic centers stay open all the time so it is easy to visit one during the month and worship. Oftentimes, there are lectures held in the mosque, so in addition to the acts mentioned above, there are opportunities to rekindle an intellectual interest in faith.
Guests frequent Islamic centers in higher numbers. Non-Muslim family members accompany recent converts, co-workers share a meal with a friend, and, in conjunction with universities, schools or other religious institutions, guests are invited to experience the food and spiritual blessings of the month. Oftentimes, civil and political leaders visit centers, acknowledging the important contributions of American Muslims.

06 June 2016 Remarks by Secretary of State Kerry at the S&ED  Before the Small Session 1: Bilateral Issues
SECRETARY KERRY: So, Mr. State Councilor, thank you very much. We had a very extremely productive morning, and we had a good working lunch talking over a number of our bilateral issues with respect to Afghanistan, Iraq, Syria and some (inaudible). We’re going to talk a little more about that (inaudible) this afternoon.

But I think that what’s clearer is we are developing increased number of conflict locations and we have a mutual interest in subjects like Pakistan, Afghanistan, Syria. We are all working together to try to reduce the number of threats to our (inaudible), financial seeds that (inaudible), sometimes threaten the legitimacy of the state.

Vice Premier Liu gave me a very special treat, which was a personal tour of part of the Forbidden City, the garden – the Qianlong Garden that has been under restoration, 230 years old, and I understand that it is a partnership between the Chinese Palace Museum and the New York-based World Monuments Fund that has helped to restore the elegance and the extraordinary beauty of this place. Frankly, I think our whole team interpreted the privilege of visiting that old palace and garden as an expression – a symbol, if you will, of the important development which is represented in the growing eagerness of Americans and Chinese to join forces for the benefit of both of our countries.

06 June 2016 The U.S. and EU look to extend sanctions on Russia
The United States will maintain sanctions against Russia, and the European Union should do the same, according to the U.S. Department of State’s coordinator for sanctions policy, Daniel Fried.
EU leaders will hold discussions at the end of June to decide whether to extend sanctions that expire in July. In a recent interview with German newspaper Die Welt, Federica Mogherini, the EU’s foreign policy chief, said she expects sanctions to be renewed because full implementation of the Minsk agreements has so far “not been reached.”

04 June 2016 The President’s Weekly Address: Building on America’s Economic Recovery
In this week’s address, the President discussed his return to Elkhart, Indiana, a town that that was among the hardest-hit by the worst economic crisis of our lifetimes.

Do you have a question relating to to U.S. foreign policy or any of the content on this update?
If so, please get in touch via our
Research Enquiries form.