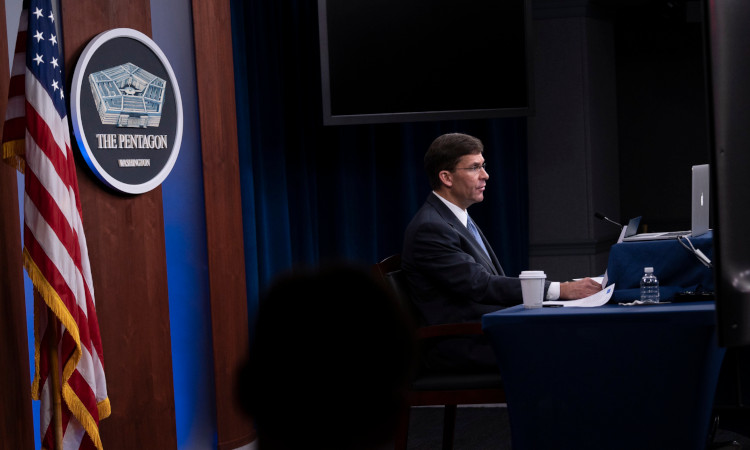 Today the Secretary of Defense announced an update to the status of our U.S. European Command Force Posture review as a part of the department’s continued efforts to implement the National Defense Strategy.  Following the decision from the President in early June to reduce our force footprint in Germany, the Secretary provided direction to the Department to develop options for repositioning our forces throughout Europe using five core principles.

Good morning everyone, and thank you for joining us today. Since being sworn into office more than a year ago, I have been consistent in stating that my top priority would be implementing the National Defense Strategy. Over the past year, we have done just that.

If you look at my recent message to the joint force regarding the progress we’ve made, you’ll see very clearly how far we have moved on our three lines of effort, which include the first line of effort: build a more lethal force; and the second line of effort: strengthen alliances, as well as our 10 subordinate goals.

One important initiative to advance the NDS has been to conduct a review of all the Combatant Commands to ensure a focus on NDS priorities. This includes optimizing our force presence worldwide; directing our time, money, and manpower toward our highest priorities; implementing our Immediate Response Force, Contingency Response Force, and Dynamic Force Employment enhanced readiness concepts; and, moving toward greater use of rotational forces from the United States to enhance our strategic flexibility and operational unpredictability, as we’ve done over the past few months with our Bomber Task Forces. We are pursuing several other initiatives under this rubric as well.

There are currently more than a half dozen Combatant Command reviews underway, beginning with U.S. Africa Command, and the most recent being U.S. Space Command. Today, we want to update you on the status of our U.S. European Command review, which was accelerated with the President’s decision in early June to reduce our footprint in Germany, and our plans to reposition our forces in Europe to be better situated for Great Power Competition.

It is important to note that in NATO’s 71-year history, the size, composition, and disposition of U.S. forces in Europe has changed many times. Sometimes this has been a result of changes in the threat, sometimes because of other changes in the international environment, and sometimes simply because the borders between NATO countries and Russia have shifted as new Allies have joined. As we’ve entered a new era of Great Power Competition, we are now at another one of those inflection points in NATO’s evolution, and I am confident the Alliance will be all the better and stronger for it.

Since June, EUCOM has done excellent work in developing a plan that achieves the President’s objective, and meets the following five principles that I gave General Wolters as he and his staff began their planning:

5. Take care of our Service members and their families in the process.

The President approved the EUCOM plan in late June; we briefed key members of Congress last week; and the team and I spoke with NATO Secretary General Stoltenberg and directly affected Allies over the past few days. As we share the plan with you, note that this plan is subject to – and likely will – change to some degree, as it evolves over time.

The current EUCOM plan will reposition approximately 11,900 military personnel from Germany – from roughly 36,000 down to 24,000 – in a manner that will strengthen NATO, enhance the deterrence of Russia, and meet the other principles I set forth.

Of the 11,900, nearly 5,600 Service members will be repositioned within NATO countries, and approximately 6,400 will return to the United States, though many of these or similar units will begin conducting rotational deployments back to Europe. The broad strokes of these moves are as follows:

Various U.S. headquarters will be consolidated in locations in Europe outside of Germany, including, in some cases, collocating at the same locations as their NATO counterparts in Belgium and Italy. This will strengthen NATO and improve the operational efficiency and readiness of over 2,000 Service members.

The nearly 4,500 members of the 2nd Cavalry Regiment will return to the United States, as other Stryker units begin continuous rotations farther east in the Black Sea region to enhance deterrence and reassure allies along NATO’s southeastern flank.

The 2,500 airmen based in Mildenhall, United Kingdom, who are responsible for aerial refueling and special operations, and who had been scheduled to re-base to Germany, will remain in the U.K., thus ensuring the uninterrupted readiness and responsiveness of these units.

A fighter squadron and elements of a fighter wing will be repositioned to Italy, moving them closer to the Black Sea region and better capable of conducting dynamic force employments and rotational deployments to NATO’s southeastern flank.

In addition to these moves and the rotational forces announced by President Trump and Polish President Duda in 2019, we also plan on rotating forward the lead element of the Army’s newly established V Corps headquarters to Poland, once Warsaw agrees to a Defense Cooperation Agreement and burden sharing details, as previously pledged.

Our aim is to implement these moves as expeditiously as possible, consistent with the principles I set forth from the beginning, particularly being fair to and taking care of our Service members and their families. We could see some moves begin within weeks; others will take longer.

As anyone can see, the repositioning of our forces in Europe constitutes a major strategic and positive shift, wholly in line with the NDS, and consistent with other adjustments the U.S. has made within NATO in previous times.

And, of course, at all times, we will prioritize our most important resource: our Service members and their families. No moves will take place without thorough communication with our people, continued engagement with Congress, and consultation with our Allies.

Thank you, and I will now turn it over to the Vice Chairman of the Joint Chiefs of Staff General Hyten, and EUCOM Commander General Wolters, who will cover these moves in more detail.