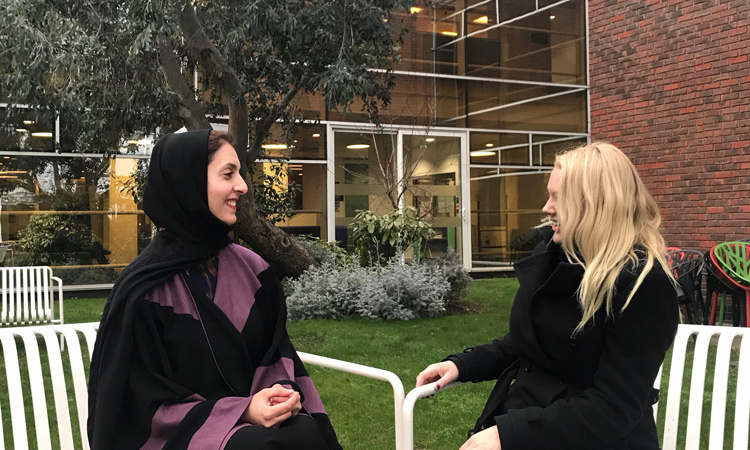 In May 2016, U.S. Embassy London held the reception for the 19th International Symposium in the Series of Diplomacy in the 21st Century. That year, the event hosted by Mahvash Siddiqui, U.S. Embassy’s Science, Technology and Health officer, focused on the theme of Science Diplomacy –which brought together an international audience of Science ministers, Ambassadors, science attachés, academics and private industry professionals serving in the UK and beyond.

Using the international language of science, science diplomacy helps us work with audiences previously not reached by U.S. diplomats. In the same vein, our U.S.-UK-European Space and Nuclear cooperation is at its foremost, as witnessed at the International Space Station and CERN labs where U.S. scientists work shoulder to shoulder with Europe’s top scientists to find cutting edge research including the Hadron collider and satellite technology. Deployment of technology is occurring at breakneck speeds. At the heart of many of these technologies is data.  Data analytics will help us better monitor our health and wellbeing, while also having applications that are not today known or developed.  It does not take much to imagine how these developments might spark a new sector of economic prosperity. In fact, Transatlantic Data Flows are key to so many of our joint economic and S&T pursuits.  Our science diplomats ensure the State Department leadership is aware of emerging technologies and S&T trends that could change the very nature of diplomatic engagement around the world.

One of the main pillars for the International Symposium for Science Diplomacy was to strengthen the network of foreign science diplomats in the UK and empower new diplomats in the making including women in the fields of science, technology, engineering and math (STEM).

One of the stars to emerge from the Science diplomacy conference was Dr. Samia al Shouli, who gave a speech on a medical approach to science diplomacy—a unique perspective. Dr. Samia al Shouli hopes to heal the world with science—but not just in the traditional way. Dr. al Shouli is a strong proponent of science diplomacy, or the idea of applying science to solve some of the world’s most pressing public health problems including antimicrobial resistance, cholera and maternal health–as well as using it as a tool for building relations between countries.

Although there have been applications of science on world problems for centuries and a number of examples where science was used to build relations between countries (the U.S. Government is a strong proponent of diplomatic outreach through science) the actual recognized field of science diplomacy is a relatively new one—especially, she says, for Arab countries. And, as Dr. al Shouli explains, much of the focus has been on the technical and engineering side. Dr. al Shouli, however, has sought to offer a medical perspective.

The first Saudi woman to combine the fields of medicine and diplomacy, Dr. al Shouli was inspired by the Science Diplomacy conference to one day represent her country as a female science minister. With six years as a member of the Arab-British Chamber of Commerce, a Bachelor’s in Medicine, three Master’s Degrees, a recently-submitted PhD Thesis—and two previous high-level job offers from the WHO, Dr. al Shouli is well on her way.

After two years serving as a resident in internal medicine at King Khalid University Hospital in Saudi Arabia, al Shouli sought to specialize further. Yet, while many people go into immunology in Saudi Arabia, there was not yet a program in diagnostic immunopathology in her country (Immunopathology is a branch of medicine that deals with immune responses associated with disease).

Al Shouli applied to King’s College, and she began her cultural interchange between the two countries. After graduating with her initial MSc in Immunology from King’s, she went on to continue the study, taking courses at Imperial College and then receiving a second Masters from the University of Nottingham in 2013. However, al Shouli began to think about the ways in which her helping people could be used on a greater scale.

I had a chance to spend an afternoon with the inspiring Dr. al Shouli at the Diagnostic Immunopathology Labs at King’s College and talk about some of the reasons that diplomacy and medicine can be the perfect marriage, and what inspired her to combine them.

Dr. al Shouli: For me, medicine aids diplomacy. A large number of the greatest threats facing the world today require a resolution based on science. Diplomats are amongst the professionals who have the skills to deal with people in all parts of the world and attempt to find a solution. Diplomats with a medical background can be the channel for lasting partnerships with developing states for building a bridge of trust and the transmission of knowledge…I found that doctors and diplomats share some common values, and I call these [the] ‘tri-principles,’ and they are empathy, respect and trust.

Dr. al Shouli trained in medicine in the morning and diplomacy in the evenings. After full days at the hospital, she would travel to Loughborough University for her diplomacy classes—often times returning back to the hospital in the nights after her classes concluded.

She found that mornings and evenings brought totally different worlds.

In the “morning you are talking about the disease and evening you are talking about what’s happening in the world,” she said. While the mornings brought death and disease within the hospital walls, her evenings of diplomacy were filled with love and “healing”—the same way a doctor would try to cure a disease, diplomats were there to solve the world’s problems. The marriage of the two, then, seemed natural.

Al Shouli was previously offered two positions with the WHO, including of Assistant Director General for Metrics and Measurement. Still finishing her PhD thesis and still taking evening classes in diplomacy—all while working in the immunopathology lab—al Shouli decided instead to continue her studies, in part so she could also bring the field of Diagnostic Immunopathology back home.

Her work bringing together the U.K. and Saudi Arabia has not gone unnoticed. Three times she has been awarded by the Saudi Cultural Bureau in the UK, once even receiving an award from the Saudi Ambassador himself. In December of last year, al Shouli graduated with her MSc Diplomacy, Statecraft and Foreign Policy from Loughborough University, earning high merit.

Although Dr. al Shouli “wants to be a science diplomat,” in reality, she already is one.

You can read a longer piece by Dr. al Shouli on Science Diplomacy and Medicine here.

Science Diplomacy is a priority for the U.S. Department of State. As part of the State Department’s directive, the U.S. Embassy in London aims to strengthen the science and technology relationship with key countries and regions to accomplish the State Department’s policy priorities. The U.S. Embassy in London aims to support innovation in science, technology, environment and health affairs, as well as promoting young women in STEM careers. Thus we cherish the fact that Dr. al Shouli was inspired by the Science Diplomacy reception we held at the U.S. embassy—which has given her vision to change the world for the better.

Kristin Green is an undergraduate senior in the Walsh School of Foreign Service at Georgetown University. She will graduate in May with a degree in International Politics with a Concentration in International Security. Her love for London began as a student at King’s College in 2016, and she returned to study at King’s again the following year. Her academic interests include economic issues and international affairs.