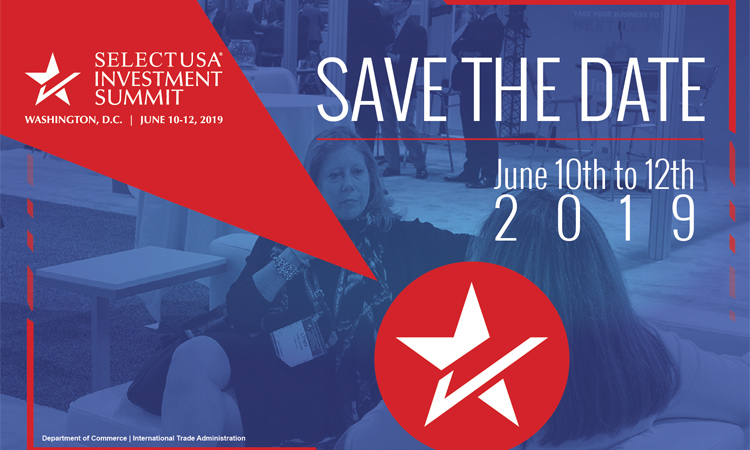 “Throughout its existence, the SelectUSA Investment Summit has been the best place to make the connections necessary for business success here in the United States,” said Secretary of Commerce Wilbur Ross. “Past Investment Summit participants have announced $98 billion in new investment projects which have been responsible for creating more than 150,000 American jobs.”

The United States is currently home to more foreign direct investment than any other country in the world, with a total stock value of $4 trillion at the end of 2017. The previous five Summits alone attracted thousands of international investors and state and city economic development representatives alike.

“With a booming economy and a market which spends over $13 trillion dollars a year, the United States is the perfect place for any business looking to invest and grow internationally.” Ambassador Johnson said. “British businesses are especially successful in America and the companies we’ve taken to the SelectUSA summit have invested $1.3 billion and counting. We can’t wait to help more British firms follow in their footsteps and start their exciting journey towards making it in America.”

UK participants in the previous year’s Summit reported a sum of $1.28 billion in capital investment over a total of 52 projects that were facilitated by attending the Summit.

U.S.-based international businesses appreciate the added advantages of being connected to 20 additional countries and markets through U.S. free trade agreements, providing enhanced access to over 780 million global consumers. UK-firms relish this added value of trading from the United States, where they exported $43.1 billion of goods from the United States in 2015.

Learn more about the 2019 SelectUSA Investment Summit and how to apply at www.selectusasummit.us

Established in 2011 by Executive Order, SelectUSA’s mission is to facilitate job-creating business investment into the United States and raise awareness of the critical role that foreign direct investment plays in the U.S. economy. SelectUSA helps U.S. economic development organizations and companies of all sizes find relevant information, make critical connections, and successfully navigate the path to business investment. Learn more about the SelectUSA program at selectusa.gov and follow us @SelectUSA