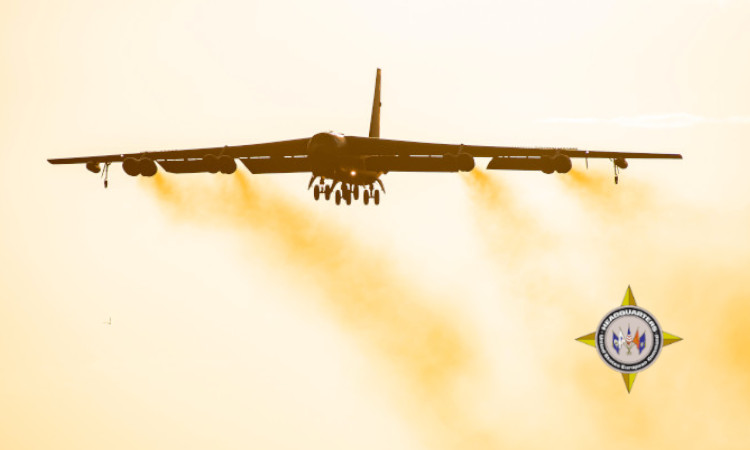 A B-52 Stratofortress flies overhead at RAF Fairford, England, Aug. 22, 2020. Strategic bombers contribute to stability in the European theater as they are intended to deter conflict rather than instigate it. If called upon, U.S. bombers offer a rapid response capability. (U.S. Air Force photo by Se

In a unique spin on regularly recurring Bomber Task Force (BTF) missions in Europe, six U.S. Air Force B-52 Stratofortress strategic bombers will fly over all 30 NATO nations in Europe and North America on Aug. 28.

This single-day mission titled Allied Sky is intended to demonstrate NATO solidarity, enhance readiness and provide training opportunities aimed at enhancing interoperability for all participating aircrews from the U.S. and NATO allies. Allied Sky is the latest iteration of routine BTF missions that have occurred in the European theater of operations since 2018, with more than 200 sorties coordinated with Allies and partners. BTF missions are long-planned and not in response to any current political events occurring in Europe.

Allied Sky will be conducted by two teams:

“U.S. security commitments to the NATO Alliance remain ironclad,” said Gen. Tod Wolters, commander of U.S. European Command (USEUCOM). “Today’s bomber task force mission is another example of how the Alliance sustains readiness, improves interoperability and demonstrates our ability to deliver on commitments from across the Atlantic.”

Operations and engagements with Allies and partners serve as cornerstones highlighting USEUCOM’s commitment to global security and stability. These opportunities also serve as a reminder that, despite ongoing challenges presented by COVID-19, U.S. forces remain fully ready to execute their missions across all domains while enhancing interoperability alongside Allies and partners.

“By further enhancing our enduring relationships, we send a clear message to potential adversaries about our readiness to meet any global challenge,” Wolters added.

Footage of the B-52 Stratofortress bomber aircraft in flight is available at https://www.dvidshub.net/video/285495/b-52-stratofortress

U.S. European Command is one of two U.S. forward-deployed geographic combatant commands whose area of focus spans across Europe, portions of Asia and the Middle East, the Arctic and Atlantic oceans. The command is composed of approximately 70,000 military and civilian personnel and is responsible for U.S. defense operations and relations with NATO and 51 countries. For more information about U.S. European Command, visit https://www.eucom.mil