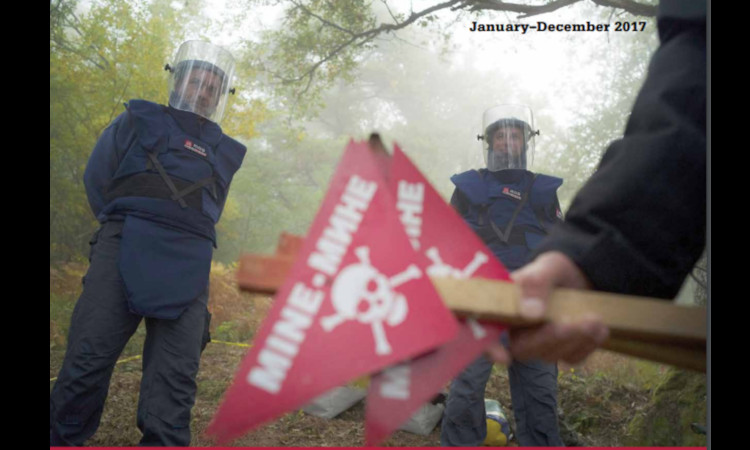 “This 17th Edition of To Walk the Earth In Safety summarizes the United States’ CWD programs in 2017. CWD assistance provides the United States with a powerful and flexible tool to help partner countries manage their stockpiles of munitions, destroy excess small arms and light weapons (SA/LW) and clear explosive hazards such as landmines, improvised explosive devices (IEDs), and UXO. Our assistance also helps countries destroy or enhance security of their man-portable air defense systems (MANPADS) and their threat to civilian aviation, in addition to other weapons and munitions. … Thanks to the U.S. Congress’ bipartisan support and support of the American people, we can attest that our goal remains one where all may walk the earth in safety.” — Message From Under Secretary Andrea Thompson

The Office of Weapons Removal and Abatement in the U.S. Department of State’s Bureau of Political-Military Affairs has released the 17th Edition of To Walk the Earth in Safety, a report underscoring the accomplishments of the U.S. Conventional Weapons Destruction Program. For more than 20 years, the United States has led the international donor community in promoting peace and security worldwide by partnering with nations to reduce the availability of excess, loosely-secured, or otherwise at-risk small arms and light weapons and munitions, as well as to address humanitarian hazards from landmines and unexploded ordnance in post-conflict countries.

The United States is the world’s single largest financial supporter of conventional weapons destruction, investing over $3.2 billion in more than 100 countries since 1993. In 2017, the Department of State funded and managed conventional weapons destruction programs in 47 countries. Our efforts – those of the United States government and all of our global partners – are crucial to building a more safe, secure and prosperous world. Thanks to strong bipartisan funding support from Congress, the Department of State looks forward to continuing this important work with other donor countries, those impacted by conflict, and the brave men and women working in the field to secure at-risk weapons and munitions and clear landmines and other explosive hazards.
Source:  State.Gov

The To Walk the Earth in Safety (2018) report is available in both HTML-based files and as a PDF document as follows: