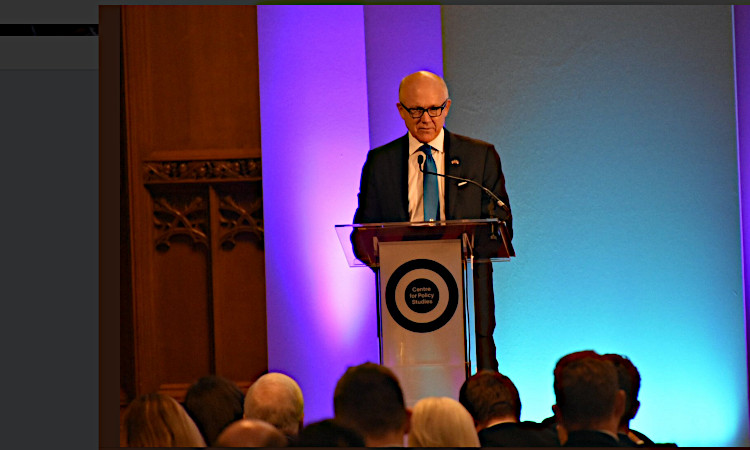 Ambassador Johnson delivered a keynote speech at the Center for Policy Studies’ Margaret Thatcher Conference on Britain and America.

[As prepared for delivery]

AMBASSADOR JOHNSON:   Thank you Lord Strathclyde and thank you to the CPS.

So I asked if I could join her. And I still remember the conversation – very distinctly. At the time, I was the chairman of a Juvenile Diabetes charity.

We spoke about this condition for the next two hours. And it didn’t end there.

Margaret Thatcher was a woman of action.

If she saw a way she could change the world, she went ahead and did it.

So a few months later, she flew back to America.  She gave a major speech at our Juvenile Diabetes conference.   And her backing meant we could go to Washington.  And win vast sums of investment to research the condition…and improve the lives of thousands of our children.

It’s easy to see why Americans love Margaret Thatcher.  She was always a true friend of the American people.

And she was our kind of person.

She was a forward thinker! A revolutionary!

When Thatcher came to power, Britain was in a bad place.  There were strikes and blackouts.  Inflation and stagnation. Britain even had to go to the IMF for a loan to make it through.

Then Margaret Thatcher arrived. She wasn’t afraid of change, she embraced it.  She rewrote the rules.   The UK went from an economic basket case… to one of the most successful countries in Europe.

Margaret Thatcher didn’t just change British history.  In partnership with President Reagan, she took on the USSR. And she helped change the rest of the world as well.

A strong leader has vision. They think big.  They change things up. If that’s what Britain’s next leader does – Whether it’s Boris or Jeremy – I think Britain’s best days are ahead.

Because I’m confident that – whatever happens – this country is going to do great.  The UK has so many incredible advantages.  If you were going to design a country to be successful…It would have all the ingredients Britain already has:

It would be democratic.

It would have a great culture, history and legal system.

It would have world-class universities, full of the brightest minds.

It would have innovative businesses and skilled workers.

It would have a strong professional military.

It would even have the great British accent that everyone loves in New York so much!

What’s missing here? The answer is nothing.   That’s not flattery. It’s reality.  Britain has everything it needs to succeed. And that’s why this is still a country on the move.

When I got here 22 months ago, the forecasts were bleak. But all these predictions were greatly exaggerated.

I don’t buy into the doom and gloom. Everywhere I look, I can see this country growing. I can see it from my office window – All I see is cranes and construction sites. I can see tremendous progress happening here.

The City of London is doing very well.   It’s a financial powerhouse and it’s not going anywhere.

There is enthusiasm and success everywhere you look.

And that’s great news for the U.S.

We have a special relationship with this country.

You might be tired of hearing that term, ‘special relationship’.  It’s older than I am.   But isn’t it true?   We invest more in each other than anyone else…

We create a million jobs for each other…

We trade $260 billion goods and services…

And it’s more than business.

From a military standpoint, we can trust each other like nobody else.

We even put British officers in charge of American lives.

If you trust someone with your sons and daughters…

What level of trust is greater than that?

Is this relationship between our countries special?

You’re darn right it is.

But President Trump wants to make our relationship even stronger.

He sees the potential for our countries to do a lot more together.  Particularly our business relationship.  You heard him on the State Visit.  He said he wants to double or even triple the business we do together.  And under his Administration, we’ve already seen a big jump.

Last year, trade between our countries was up 16%.

But we can do better.

There is no ceiling to how successful we can be together.  Especially if we do a free trade deal together.

This is something that has the President’s full attention.

We have taken all the legal steps we need to take.  As soon as Britain leaves the EU, we’re ready to negotiate a deal.  And we want to get it done fast.

Why are we so enthusiastic? We do a lot of business with the UK – $260 billion. But we are not on special trade terms at the moment.

But America and Britain are essentially trading on WTO terms.

Imagine how much better it could be if Britain had a trade deal with America.

And not just America.

Britain could do FTAs with countries across the world.  It could be incredible for your economy. Free trade agreements matter.

If you break down barriers and cut bureaucracy…

Trade becomes a lot easier, and it costs a lot less.

Because when trade costs more, they pay higher prices.  And when competition is restricted, they get less choice AND lower quality.  Any sports guy will tell you the same thing: you only get better through competition.  So free trade deals can bring enormous benefits for society as a whole.

And the U.S. can’t wait to do a deal with the UK.  But whenever I say that, I always hear the same objection…

What’s the problem?  Most chicken processing plants don’t even use chlorine any more – it’s only about 10%.  But even so-called ‘chlorinated’ chicken is perfectly safe.

EU scientists have confirmed this.  The World Health Organization also states that North America has less foodborne diseases than Europe. I got attacked for saying that before.

But it’s true!  The BBC even fact-checked that – thank you BBC!   And when British tourists eat our chicken in America – I don’t hear any complaints!

So why can’t you get it here?

The only role of Government is to make sure products are safe.

The EU have run a very good PR campaign against U.S. chicken.   They’ve done a great job stopping outside competition.  But when Britain leaves the EU, do you still want this to continue?  In America we think the customer is king.  Our consumers are smart.  They know what they want.  They are capable of making their own decisions.

If they don’t want something, they won’t buy it.

British consumers are the same.  Let them make their own choices.

Have you heard about the Impossible Burger?

And vegans across the world are talking about it because it’s meant to be the best vegan burger out there.  It’s made from plants, but it looks and tastes exactly like real meat.  It’s already in 9000 restaurants across the U.S., Hong Kong and Singapore – including Burger King.

And this product is so popular, the company is warning of shortages.  They can’t make them fast enough to keep up with demand.  But you won’t find this burger in the EU’s Museum of Agriculture.  The EU approvals process is so slow it could be 7 years or more before it hits UK shelves.  Maybe it will never get here – like so many other great products.

British customers are missing out.

But after Brexit, this country will be able to make its own decisions about the products you want.

For the first time in 40 years, Britain will be in the driving seat – not Brussels.

The UK will be able to do deals that make sense for this country.

And I’ve heard some people say that’s naive.  They suggest countries like America will bully Britain in any trade negotiation.  They even claim we will destroy or privatize the NHS.

None of this is true.

First, nobody is going to push Britain around.  Britain is a tough country – more than capable of negotiating a deal that protects your interests.

Second, as I said earlier, Britain’s success is in America’s interests.

The UK is our strongest partner and we want to keep it that way.

It’s prosperous countries which are best able to pay for their defense.  America – and the rest of the world – really needs a strong Britain.  The West got complacent after the collapse of the USSR.  Lots of countries stopped investing in security and started doing the minimum – or getting other countries to pay for them.

But guess what – the threats are back – and they are back in force.  They are threats which Margaret Thatcher and Ronald Reagan would have recognized:

Iran causing havoc in the region and funding terrorism.

The threats are back.

But the world has changed since Thatcher and Reagan.

Interference in elections. Campaigns of disinformation – and division.  Cyber-attacks.

This is something we’ve all discussed a lot.

If we let untrustworthy countries into the heart of our our economy and infrastructure – what could they do?

It’s like letting a kleptomaniac move into your house.

We need this special relationship between our countries.  And we have to look at the future with confidence.  That’s what Reagan and Thatcher did.

And that’s what President Trump is doing now.  He’s looking at the future and he wants to change the world.

Before he left the UK a couple of weeks ago. He wrote a letter from Air Force One to my two sons – Brick and Jack, 13 and 10 years old.

And the message had just two words – “Think Big”.

The British people have got big choices to make …about what kind of country you want.…and your place in the world.

As you look forward, THINK BIG.

And I can’t wait to see what more our countries can achieve together.