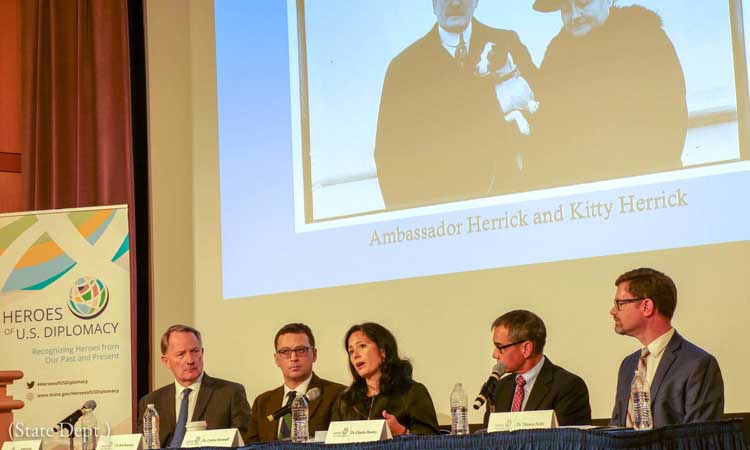 U.S. diplomats worked behind the scenes in World War I to help alleviate suffering and bring an end to the war.

This week, we honored the contributions of U.S. diplomats during #WWI. These #HeroesofUSDiplomacy navigated unprecedented challenges, supported U.S. citizens, soldiers, and prisoners of war, and facilitated aid in Europe. Read their stories here: https://t.co/NGGCbWdm5N pic.twitter.com/qxmnqggV9s

“By the time the war had ended in 1918, America had assumed a major role on the global stage … promoting peace,” Acting Assistant Secretary of State for European and Eurasian Affairs Philip T. Reeker said in introducing the discussion.

The four historians — Seth Rotramel, Lindsay Krasnoff, Charles Hawley and Thomas Faith — each highlighted a part of the world where U.S. diplomats worked to bring peace, foreign aid and diplomacy to the conflict.

Examples of State Department employees’ efforts during World War I:

“By the post-1945 period, the foreign service as it’s constituted looks very similar to the functions and roles that were pioneered in 1914 in France,” Krasnoff said at the discussion.

“Our counterparts from 100 years ago were in so many ways just like us, and I think that’s one of the really powerful parts of the entire story of U.S. diplomats operating … during the war years,” Krasnoff said.