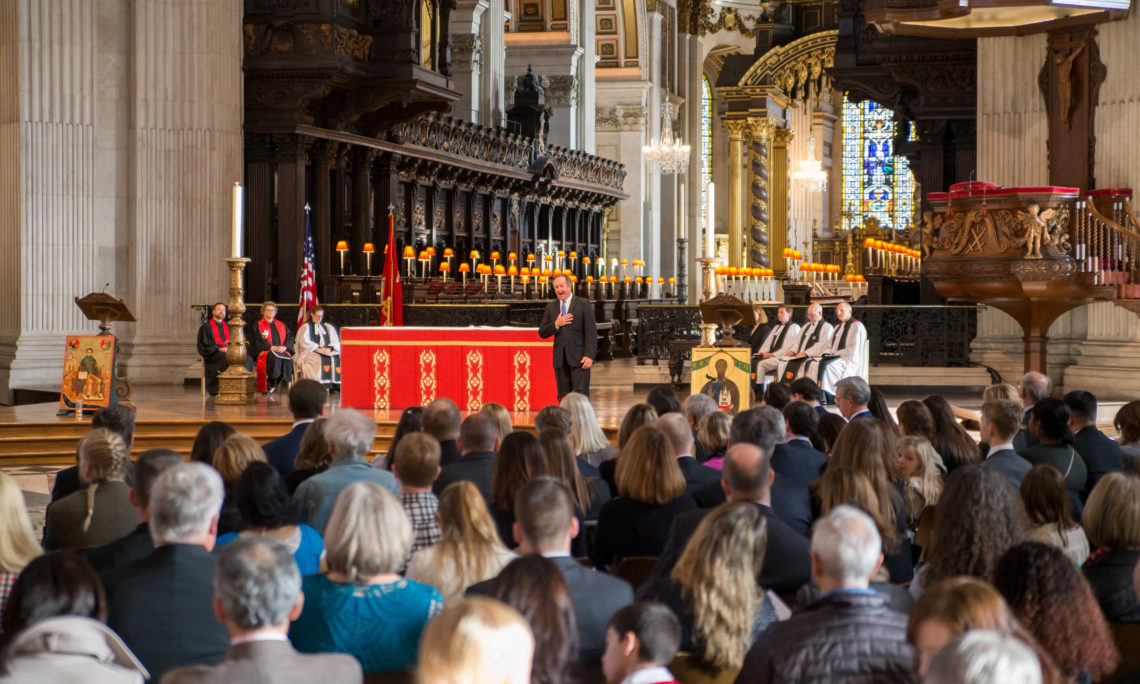 (As prepared for delivery)

It is a great honor for me to speak here.

St. Paul’s is a very special place and i want to thank our British friends for welcoming us here on such an important day.

Thanksgiving is a time when all Americans come together – as we have done today.

And with our family, friends and communities, we give thanks for our blessings.

As President Trump said in his Thanksgiving Proclamation:

“as one people, we seek god’s protection, guidance, and wisdom, as we stand humbled by the abundance
of our great nation and the blessings of freedom, family, and faith.
”

From the days of the first Pilgrims, we Americans have had a lot to be thankful for.

Every American school child knows the story of the early English settlers.

They would not have survived that first winter without the generosity of the native Wampanoag tribe, who gave them food and taught them how to farm and fish.

But the Wampanoag did more than pass on new skills.

They engrained a spirit of responsibility and community that lives on in the heart of every American today.

When times are tough…when people are in need…we pitch in and we help each other. Not for reward or credit.

But because we know that helping other people is the greatest thing we can do.

“carry each other’s burdens, and in this way you will fulfill the law of Christ.”

Well carrying each other’s burdens is an American way of life.

We see it every Thanksgiving when millions go out and help people who are down on their luck.

We see it in the great spirit of volunteerism and charity that defines our country more than any other nation on earth.

We see it every time a young man or young woman steps up to serve our country – in our schools and our hospitals, in our military, our Foreign Service and our Peace Corps.

The American spirit is to serve one another – in good times and in bad.

In fact the tougher things get, the more we see that spirit in action.

That’s when we really roll up our sleeves and step up to the plate.

In World War II, millions of Americans came forward to play their part.

I’m proud of the role my own mother played – now 97 years old – she spent the war teaching sailors and aviators the art of celestial navigation.

So many Americans joined the fight against fascism and tyranny.

Many of them lost their lives.

The American memorial here in St. Paul’s commemorates the 28,000 Americans who died while they were based in the UK.

All in all, over 400,000 Americans made the supreme sacrifice to defend our friends and freedom.

As Jesus says in the gospel of Saint John:

“there is no greater love than this — that a man should lay down his life for his friends.”

On 9/11 we saw the American spirit in action again.

I’ll never forget being in New York that day.

It was a day ordinary Americans became heroes.

…another crowd of brave new yorkers were battling their way into the towers to try and save the people inside.

On duty or off duty.

Whether they got the call or not.

They came to the towers.

And many of them gave their lives in the service of others and we will always remember their sacrifice.

We won’t forget how our finest and bravest worked around the clock in the weeks and months that followed.

They put in shift after shift at Ground Zero to do what had to be done.

The rest of America rallied behind them.

Our communities came together – not divided by terror – but united in the determination to help, in any way possible.

This year we saw the same spirit and resolve as we were hit by devastating hurricanes.

The American people pulled together.

Our first responders sprang into action, and so did ordinary men and women.

People were wading through floods to rescue their fellow citizens.

They were sharing their homes with strangers who lost theirs.

They were lined up around the block to volunteer or make a donation.

This is the spirit of the American people.

We help each other out.

For us it’s not just a duty to serve our country.

That’s the spirit of America that makes us great.

That’s the spirit that makes me so proud of our great nation and so deeply honored to serve as its representative to the United Kingdom, our oldest and closest friend.

And that’s the spirit of America I ask you to join me in giving thanks for today.

It is now my pleasure to introduce one of my favourite songs – a song that really captures the American spirit: “God bless the U.S.A”.