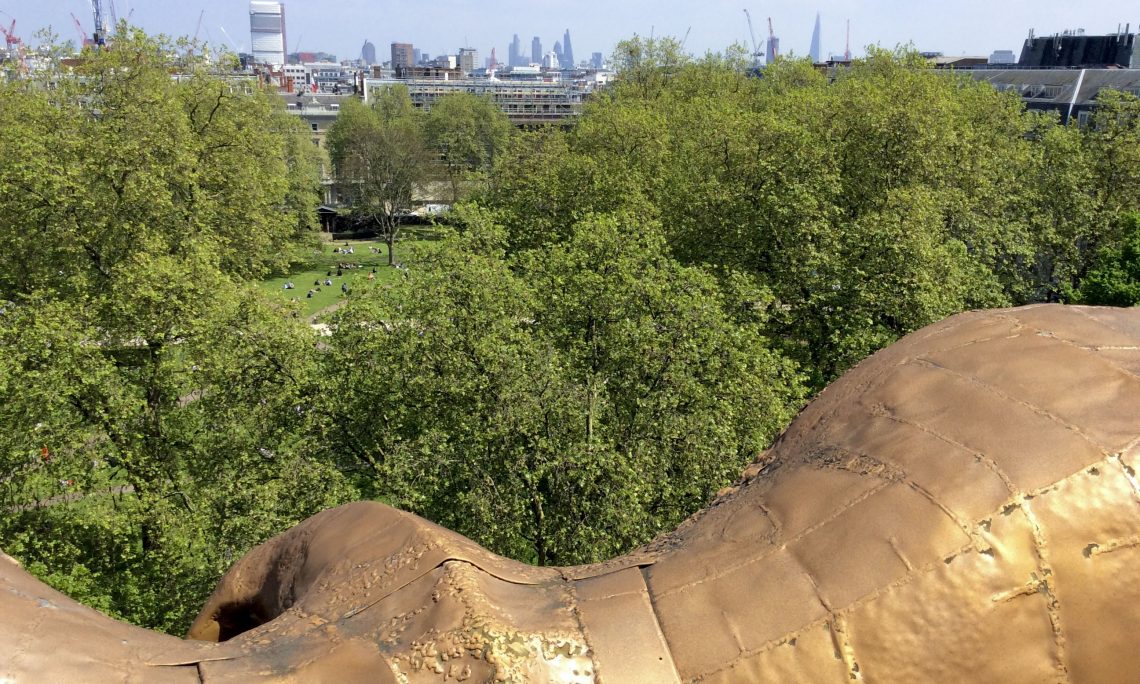 An eagle’s eye view of Grosvenor Square, May 2016

As of January 2018 the U.S. Embassy in London is now located in a new building in Nine Elms.

The United States has been associated with Grosvenor Square in London’s Mayfair since the late eighteenth century when John Adams, the first United States Minister to the Court of St. James’s, lived from 1785 to 1788 in the house which still stands in Grosvenor Square on the corner of Brook and Duke Streets. John Adams later became President of the United States, as did four other Ministers who served here: James Monroe, John Quincy Adams, Martin Van Buren, and James Buchanan. From the ranks of Ministers and Ambassadors who have served in London have also come four Vice Presidents and ten Secretaries of State.

In 1947, The Duke of Westminster donated land in the center of the square as a memorial to President Franklin D. Roosevelt, and over 160,000 British citizens contributed the funds for a commemorative statue. The present Chancery, occupying the whole west side of the square, was completed in 1960.

The U.S. Department of State competition for the design of a new Chancery for London was won by the American architect Eero Saarinen (1910-1961) who also designed the Gateway Arch in St. Louis and the U.S. Air Force Academy Chapel in Colorado Springs. The brief called for a building to house all the major sections of the Embassy under one roof in a style to blend with existing architecture of Grosvenor Square.

The resulting structure has over 600 rooms on nine floors, providing 225,000 square feet of working space for about 750 employees, less than half of whom are Americans. Only six stories, including a “penthouse” set back from the facade, are above ground level to conform in height with the surrounding buildings in Grosvenor Square. The remaining three floors are below ground.

The basic structural material is pre-cast reinforced concrete. The facade is checkered with an open grill work pattem supported on rows of concrete columns. The exterior is faced with Portland stone and decorated with gold anodized aluminum. The gilded aluminum eagle, with its 35-foot wing spread, surmounting the Chancery was created by American sculptor Theodore Roszak and is inspired by a pre-Independence carved wooden eagle in a New England museum. The main entrance in Grosvenor Square continues the motif of open grill work in gold anodized aluminum with the Great Seal of the United States set into it. The fascia is of Greek Pentillikon marble, and the floor of travertine marble from Italy.

More information is on our Grosvenor Square page.

26 June 2008 American Embassy completes Perimeter Security Project  The American Embassy is pleased to announce that major work on the Embassy’s Perimeter Security Project was completed on Thursday, June 26, 2008. The finished project includes new landscaping, a larger pedestrian area, and the opening of two new visitor-access pavilions to facilitate entry into the Embassy while reducing congestion and improving the Embassy’s appearance. The northern pavilion is for individuals seeking visas, while the southern pavilion is for official visitors to the Embassy and for American citizens seeking consular services.