Home Home / News & Events / Statement from U.S. Ambassador Johnson on the UK’s Withdrawal from the EU 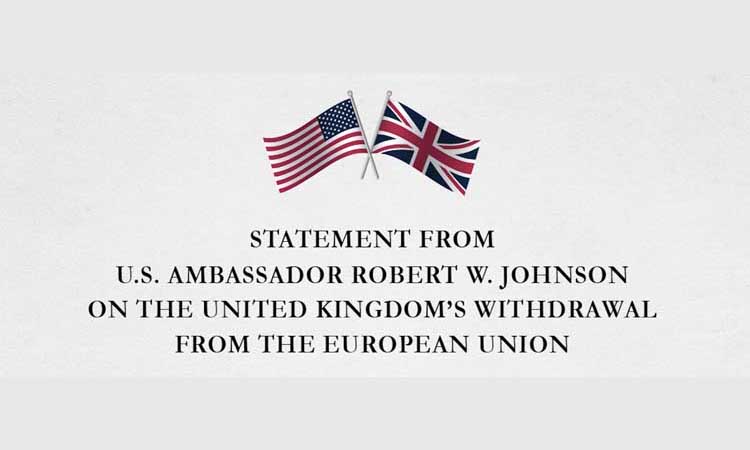 Now that the UK is back in control of its own trade policy, we look forward to achieving a broad Free Trade Agreement that will increase prosperity and create jobs in both our countries.

Today the UK leaves the EU. As Ambassador Johnson outlines in his special #BrexitDay message, the U.S. is ready to work with the UK to secure a free trade agreement that will greatly benefit both of our countries.

Statement from U.S. Ambassador Robert W. Johnson on the United Kingdom’s Withdrawal from the European Union

Today is a historic day in British history.  On behalf of the United States Government, I would like to wish the United Kingdom every success as you chart a new path outside of the European Union.  America shares your optimism and excitement about the many opportunities the future will bring.

President Donald J. Trump has long supported the United Kingdom’s sovereign decision to withdraw from the European Union.  Now that the UK is back in control of its own trade policy, we look forward to achieving a broad Free Trade Agreement that will increase prosperity and create jobs in both our countries.

There are many global challenges that we face, but we face them, as ever, together. There will no doubt be disagreements from time to time about the best solutions to the biggest problems – that is to be expected, even among friends. But this is an alliance forged in our shared history and our common values. This is a special relationship which will endure, flourish and grow even stronger in this exciting new era which Britain is now beginning.