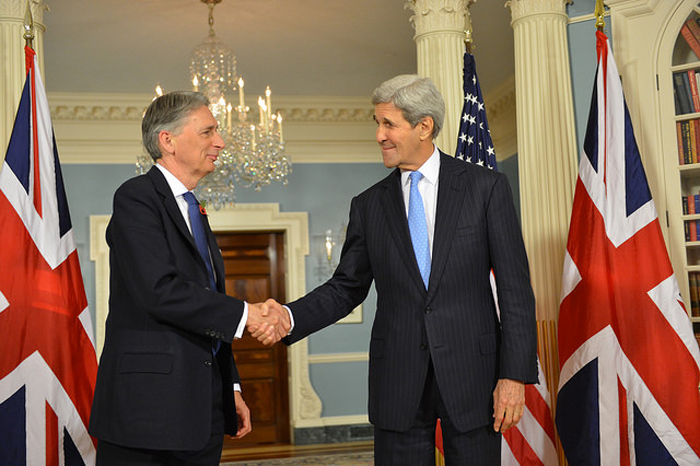 “We’re very grateful to our partners from the United Kingdom for their support and efforts on the Iran nuclear agreement. It was a multilateral agreement. The P5+1 permanent members of the United Nations worked extremely effectively together.  … And so we applaud the decision by the United Kingdom to put its defense spending at the level of 2 percent required by NATO[…]”.

SECRETARY KERRY: Good afternoon, everybody. Thank you for spending a minute with us. I am really delighted to be able to welcome Foreign Secretary of the United Kingdom Philip Hammond, who has welcomed me now many times in London. It seems we have a lot more meetings in Europe.

But most importantly, we share incredibly close efforts together, as we always have, really, on almost every subject that confronts countries in the world today. We are partners in the counter-Daesh/ISIL effort. We are working together very closely on Syria and an effort to try to build a political process that can bring an end to this human catastrophe. We just met the other day in London, where we had a long conversation about this subject, and we will be going to Vienna on the weekend, where we hope to advance the process somewhat.

We’re very grateful to our partners from the United Kingdom for their support and efforts on the Iran nuclear agreement. It was a multilateral agreement. The P5+1 permanent members of the United Nations worked extremely effectively together. And even though there were difficulties with Russia and difficulties with China on one subject or another, we were all united in making clear the importance of denying another nuclear weapon to another country at this moment or any moment.

And so we applaud the decision by the United Kingdom to put its defense spending at the level of 2 percent required by NATO, which is an important example to the world of how we need to work together to meet our security challenges, which are global at this point.

And I’m also very appreciative for the cooperation with respect to the important negotiation that will take place in Paris with regard to climate change. The world is waiting for us to act, and we have a strong, strong partner in the United Kingdom on this important priority for citizens all over the planet.

So I thank Philip for taking time to come and visit, look forward to our conversation today. And then again, it seems like we meet almost every week —

SECRETARY KERRY: — or every other week. But it’s a great partnership and I’m very happy to welcome him here. Thank you.

FOREIGN MINISTER HAMMOND: Twice this week, as it happens, it’ll be. It’s a great pleasure to be here. As Secretary Kerry says, we work very closely together. And one thing is a constant for us in this changing and dangerous world: Our alliance with the United States is our most important relationship and it is at the heart of everything we do. And we work together on the challenges we face in Syria, the challenges in Iraq, the broader problems in the Middle East, dealing with Russian aggression wherever we see it. We will always stand together. We are likeminded on almost every issue. We share values; we share a lot of culture and history together.

And we have some big challenges. As Secretary Kerry has said, we’ll be meeting again this weekend in Vienna to try to slowly move the parties, the international contact group, in the direction of a political solution to the civil war in Syria that will then allow all of us to focus our effort on the real challenge of countering ISIL. But we can only do that once we’ve resolved the long-running civil war that has claimed so many lives. And in our view, that has to involve Bashar al-Assad exiting the stage at some point in the transition process.

We met last Tuesday, but that was before we made our decision on Wednesday to end flights from the U.K. to Sharm el-Sheikh, so we haven’t yet had an opportunity to discuss the implications of the possibility that the Russian airliner in Sinai was brought down by an explosive device placed on board. We’ll need to think through what the implications of that are, not only for us but also for how we engage with Russia’s involvement in this process in Syria and beyond.

And we’ll talk about a number of other things as well, perhaps less immediately pressing. Both of us are going in the next days and weeks to Cyprus, a country that’s been divided for decades which is now tantalizingly close to reaching an accommodation and finding a way forward to the reunification of the island. And I know that all of us are doing everything we can to encourage that process.

So I want to thank Secretary Kerry for the very close working relationship that we have, and we will do everything we can to support his leadership in trying to move forward the agenda on a political track in Syria so that we can all get on with the business of fighting ISIL.

SECRETARY KERRY: Thank you very much.

QUESTION: Foreign Secretary, can I ask you a couple questions about the Sharm el-Sheikh plane crash? First of all, the Russians, we hear from the Americans, are now discussing the fact that it’s a bomb. How close do you think we are to definitively knowing whether or not it was a bomb?

And secondly, from a U.K. point of view, why is it taking so long to get British tourists out of Sharm when the Russians seem to be doing it quite quickly?

FOREIGN SECRETARY HAMMOND: Well, first of all, the definitive answer to whether or not it was a bomb will come from a forensic examination of the wreckage. That is clearly not under our control. The Egyptians, the Russians are in a much stronger position to answer that question. Our conclusions and the decisions we’ve taken have been based on a review of all the information available to us – some of it open source, some of it intelligence information.

With regard to the repatriation of citizens, we have imposed some very significant increased security requirements for flights to the U.K. out of Sharm. That has caused some delays and sort of backups in what is quite a small airport operating quite close to its capacity. There have been more Russian flights going out than flights to the U.K. Russia has far more people in the resort than the U.K. does and the Russians, as far as I’m aware, have not insisted on the additional security measures that we have imposed. We are happy with the way it’s going. We are comfortable with the level of support and cooperation we’re getting from the Egyptians. By tonight, I think we will have about 7,000 British citizens returned to the U.K. By the end of this week, we expect to have cleared the backlog. So in the circumstances, the repatriation is going smoothly.

SECRETARY KERRY: Thank you all. Thank you very much.