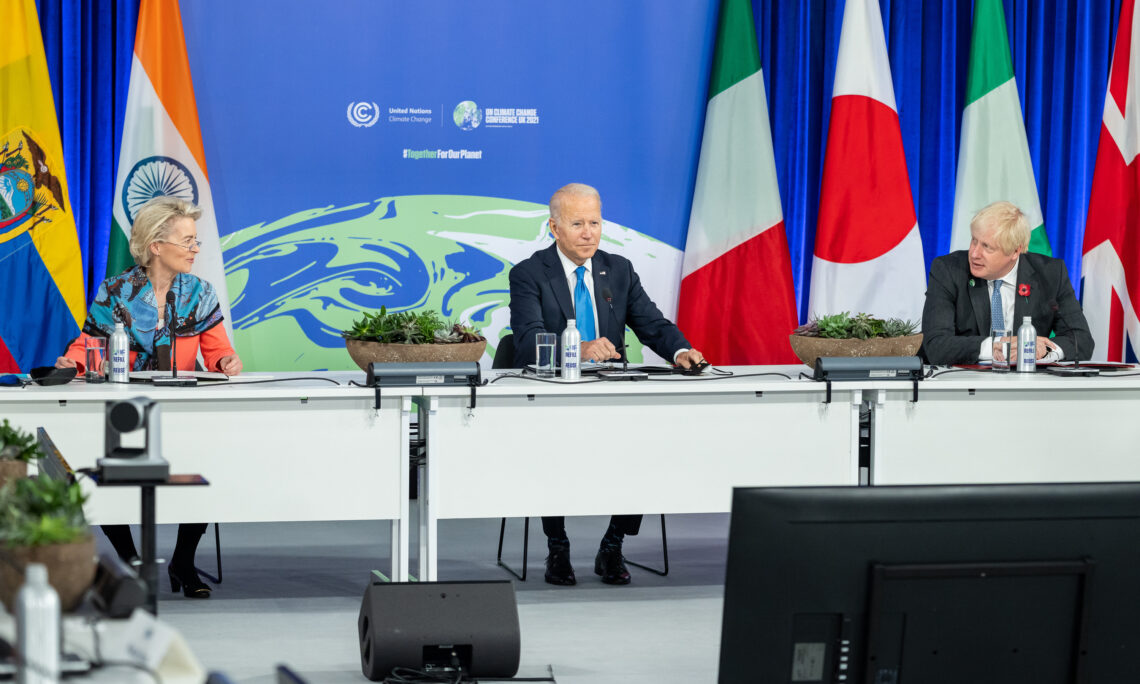 The Build Back Better World infrastructure initiative is going to show that we can grow our economies, fight climate change, and leave a better, cleaner, more livable planet for our children. Let’s get to work.

The Build Back Better World infrastructure initiative is going to show that we can grow our economies, fight climate change, and leave a better, cleaner, more livable planet for our children.
Let’s get to work.

Remarks by President Biden in Meeting on the Build Back Better World Initiative
The White House
Speeches & Remarks
November 02, 2021

THE PRESIDENT:  Hello, everyone.  Thank you all for making the time amid these very packed schedules we all have.

We’re gathered here at COP26 to emphasize how the choices we make today — and I literally mean today — will resonate for decades to come.  This is especially true when it comes to infrastructure.

And the choices to build, for example, a coal plant today instead of a solar or wind farm could mean that — another 30 years of burning fossil fuels.  Expanding a road instead of investing in mass transit could shape a city for a generation and the carbon footprint in that city.

Every choice we make in this decisive decade — and I mean it literally, between now and 2030 — has to bring us closer — closer to, not push us farther away from, a sustainable path to net-zero emissions by 2050.

That recognition was front and center when I announced the Build Back Better World initiative in June, along with our G7 partners.

I mean, it’s — we’re all on the same team with, essentially, the same issues.

There’s an urgent need for infrastructure development in countries — infrastructure that prioritize, when you build it — it prioritizes the fight against climate change from the moment the spade goes in the ground, and jumpstarts the green economic growth.

That’s what I’m focused on in the United States.  But it isn’t just an American project, it’s work we all have to do and we all are doing around this table.

Being transparent about how we’re financing our projects, we offer positive alternatives to debt — to debt traps and corruption.  We can hold entire countries back if we don’t do that.  Transparency is critically important.

And by insisting and responding to the needs of developing countries rather than dictating projects from afar, we can deliver the greatest impact for those who need it the most.

By mobilizing trillions of dollars of investment capital that’s sitting on the sidelines, that can multiply the impact of our country investments in a significant way.

That is my vision of the Build Back Better World.  But my guess is it’s my colleagues’ vision as well, and I’m eager to hear from all of you today, quite frankly.

And to start the conversation, I’d like to propose five key principles that should guide our investments in infrastructure.

First, every project should be climate resilient and developed with climate in mind.  Every project that’s started, we should think about it from the perspective of climate.  I mean that sincerely.

Today, as part of this commitment, the United States — together with the UK, France, Germany, and the EU — is announcing a new partnership with South Africa to help transform their economy to a clean energy economy more quickly.

Right now, South Africa is the largest emitter in Africa, due in large part to their heavy reliance on coal for power.

And I realize the reliance on coal is consequential.  But I can remember growing up as a young man in an area that was a heavy supplier of coal in northeast Pennsylvania.  And I watched what happened when it collapsed and how the — the impact on the community.  And that’s why we have to take care of the people who are impacted on and provide alternatives for them as well.

It’s — it’s a simple but powerful principle: Projects will only be successful, in my view, when there is buy-in, input, and engagement from the communities they’re intended to help impact.  I learned that yesterday from Barbados.  (Laughs.)  Actually, I think I knew it ahead of time, but you made a, really, very compelling speech yesterday.

Local governments, labor, and civil society should be engaged from the very start to make sure the benefits to the community are equitable and they’re immediate.

Thirdly, the Build Back Better World project should be high quality and high standards.  What does that mean in practice?  Well, it means whenever there’s something to purchase or someone to hire, we’ll use transparent and competitive processes that safeguard against corruption.

It means we’ll provide affordable financing so local taxpayers aren’t stuck with a big bill they can’t pay down the line.

It means environmental planning to reduce the risk of damaging the ecosystem and increase the resilience to climate change.

So I look forward to working with the World Bank President, David Malpass, and Mark Carney, who is now with the U.N., about how to mobilize the private sector and international financial institutions to help build a pipeline of projects that we can invest in, but can be counted on and planned for, and be done in regular order.

And finally, as you keep hearing me say — and I apologize — building out our climate infrastructure can and should help drive a sustainable economic recovery.

From the first meeting we had, I kept — I know I’m — I apologize for the repetition — but I look at climate and dealing with climate change, and I see jobs.  Good jobs, economic development, and movement.  That’s what I see.

And finally, you keep hearing me say it, but building out the climate infrastructure should drive sustainable economic recovery.  It can spur the creation of those good jobs in the developing world just like it can in the developed world.

So this climate crisis is an enormous opportunity.  It’s about jobs.  It’s about building the industries of the future.  It’s about making sure everyone shares in the benefits of an equitable and sustainable green recovery.

Build Back Better World is going to show that we can grow our economies, fight climate change, and leave a better, cleaner, more livable planet for all of our children.

So, I want to thank you all for — for joining us today.  And now I’d like to turn it over to a woman who I think impresses me every time I hear her speak, President von der Leyen, to make a few remarks.