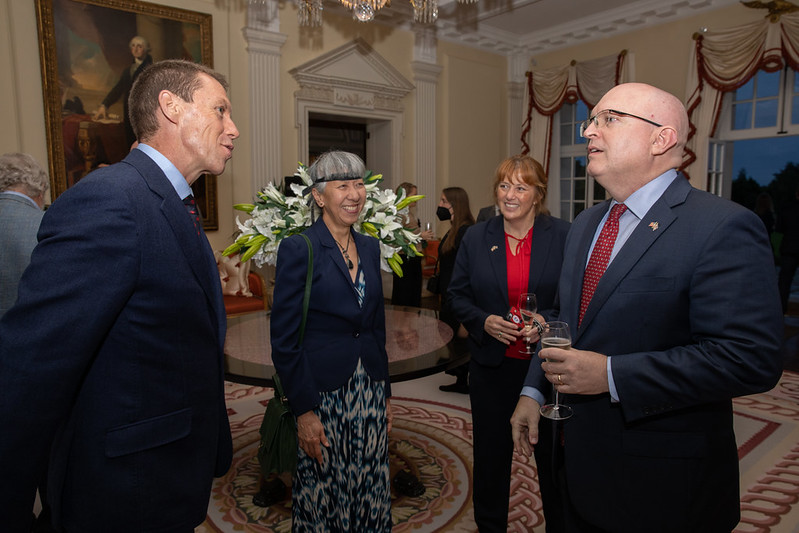 The Road to COP26 Reception at Winfield House

(As delivered)
Chargé d’Affaires Reeker:   Thanks to everyone for staying after what’s been a pretty packed day.

We’ve heard a lot of important discussions from leading voices across industry, academia, Central, and Local Government – both in person and online, from the UK and the U.S.

I want to take this opportunity to thank all of you for sharing your perspectives and expertise.

In particular, thanks to Parliamentary Under Secretary, Lord Callanan – and indeed everyone who participated from UK Government.

I’d also like to offer special thanks to Mayor Andy Burnham for joining us from Manchester – and all of you who travelled from beyond London to join us earlier today, or here this evening.

And last, but not least, I want to thank everyone who helped engineer this great brain trust – from our sponsors and panelists to the U.S. Commerce Secretary herself, Gina Raimondo as well as her incredible team here at the Embassy who work so hard every single day to bring American and British businesses together across the Atlantic and all their colleagues here in the State Department, Agricultural Service, the Department of Energy and others.

There are so many more people I would like to thank, but I know it’s been a long day for everyone, so I hope you will forgive me if I cut it there.

But I do want to say a few words about why this forum is so important and why we are so pleased to see so many senior business leaders and scientists and decision makers all coming together across the Atlantic like this.

And I certainly don’t need to remind anyone here what’s at stake.

We can all see, with our own eyes, the damage already being caused by climate change – the wildfires, the droughts, the flashfloods.

And scientists could not have been clearer with us about how much worse it could get.

Or how urgently we need to act.

The IPCC told us we’ve only got about 12 years to act if we are to stand a chance of limiting climate change to 1.5 degrees, which would stave off the most catastrophic consequences.

And they told us that two years ago.

So this is the decisive decade for our planet – and our future.

And I’m reminded of the old Chinese proverb that if you don’t change direction, you may end up where you’re heading.

And at the moment, we’re heading down the path to a world that’s three, even four degrees hotter.

Which would leave vast tracts of our planet simply uninhabitable.

Changing course is the mission of our era, and the overarching priority of the U.S. Government.

That’s why we’ve got President Biden and Secretary Kerry and Blinken and Raimondo – and every leader at every agency at every level of U.S. Government – all working on the task of turning this around.

Both in terms of bold action on the home front – where we are at the start of a new green revolution, with a new and ambitious 2030 target to slash emissions by half the level of 2005.

But it’s also important that we undertake bold action and leadership on the world stage.

Because even if U.S. emissions dropped to zero tomorrow, we’d still face a big problem – with China, for example, accounting for around 30 percent of global emissions.

So the U.S. is working very closely with partners like the UK to find ways to drive and support the global community on its path to net zero.

We are using every possible platform – whether it’s the G7 or G20.

Or the Earth Day Summit hosted by President Biden in April.

That’s not, by the way, the same as what he announced at the Earth Day Summit, when he promised to double climate finance.

Because the U.S. is serious about its support for developing countries – both to help them cut emissions and adapt to climate change.

And we are serious about leading by example to set the stage for success at the critical COP in Glasgow in just five short weeks.

And after three decades of talk, I know there will be a lot of cynics out there.

But I’m not actual one of them.

I understand that cynicism, but I’d also challenge it.

And I think anyone who was here listening to businesses today would start to challenge it too.

It actually reminds me of the cynicism which President Roosevelt encountered, 80 years ago, after the bombing of Pearl Harbor, when the U.S., unlike its enemies, was nowhere near ready for war.

It actually reminds me of the cynicism which President Roosevelt encountered, 80 years ago, after the bombing of Pearl Harbor, when the U.S., unlike its enemies, was nowhere near ready for war.

So much so, in fact, that when Roosevelt went to Congress and said we’ve got to become the arsenal of democracy we’ve got to produce enough to outgun the enemy to win this thing and he proposed making 50,000 planes a year nobody believed him.

Congress was shocked, in fact.

Yet three years later, we were making double that – the Ford factory at Willow Run alone was rolling a bomber off the line ever single hour.

And in industry after industry, American workers performed that same kind of economic miracle.

Whole new industries were created  – and with them millions of new jobs.

American business swung its full weight behind the war effort.

And in just four years, we doubled our production to lead the world, and produce 2/3rds of all Allied equipment.

So I don’t think you can ever underestimate America – or the power and ingenuity of our businesses, our universities, or, indeed, our closest ally, the United Kingdom.

The fight against climate change may well be the biggest challenge we have ever faced – and it will require a call to arms like no other in history.

It will require an alliance of nations like no other in history.

And we will have to dig deeper for victory than ever before.

But as we have seen and heard today, our countries, and our businesses and our scientists are working together now, just as they did during the war –

And with that same spirit of urgency, ingenuity, and collaboration.

So although the challenge ahead of us may be formidable, being here today, it’s impossible not to have faith in the power of U.S. and UK business:

So I look forward to seeing you again as we continue to bring the best of America and Britain together in the critical months and years ahead.

And I want to thank all of you who are bringing so much energy and passion to this effort – including our partner Estee Lauder, and I’d like to hand over to Sue Fox, the UK President, to tell them why this is so important for them.