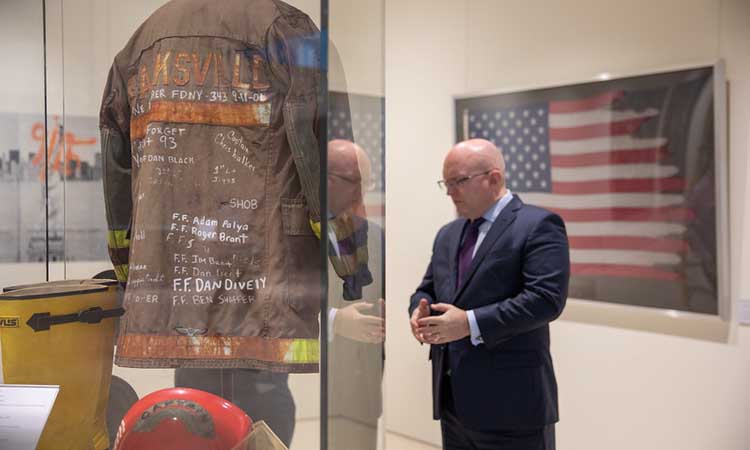 Thank you everyone for joining us this evening.

It means a lot to have so many of our close partners and friends with us as we open this special exhibition, which we’ve put together in commemoration of the 20th anniversary of 9/11.

Two decades may have passed since then – but I don’t think any of us will ever be able to forget that terrible morning – or afternoon as it would have been here.

I remember I was actually Deputy Spokesperson for the State Department that day and I was getting ready for the daily press briefing.

I was busy pulling together the latest points on one issue or another – just a regular day in the office, if such a thing exists at Foggy Bottom.

Then my assistant turned on the news, and we saw the first plane crashing into the tower.

I’ll never forget that immediate feeling of shock and disbelief which swept over us.

And then the phone started to ring and that was the moment when I realized that nothing was ever going to be the same again.

In that one, single day, so many lives had been lost or changed forever.

We will never forget the people we lost that day.

As well as from the United States, we lost people from over 90 different nations.

Including the UK – which suffered more losses on 9/11 than any other country outside the U.S.

The Union Jack which hung at the World Trade Center that day is here on display to represent and honor those 67 British citizens who were killed.

This exhibition is America’s tribute to them, and to all their friends and families who had to endure their tragic loss.

And it is also our tribute to the British public more broadly, who stood by us at that worst of moments.

We will never forget the playing of our anthem at the Changing of the Guard.

Or the thousands of messages of sympathy which poured into the Embassy from all four corners of the country.

Or the thousands of visitors who gathered here bringing flowers and notes and tributes which piled high on the steps of our Embassy and covered every part of Grosvenor Square – as you can see in the moving display over there, and above your heads.

It really is a window into what this special relationship is all about.

That love, support and solidarity, whether it is 9/11 or 7/7. Boston or Manchester. London or Orlando.

Whatever threat and whatever tragedy we face, our countries always face it together.

And this exhibition is our way of saying a profound thank you to our partners in the UK for your friendship – and a thank you, of course, to all our other allies and partners represented here tonight.

Thank you all for being here.

A few other thanks I would like to give:

First, to all of you who lent pieces and artwork for display tonight.

Second, thank you to those of you who actually created some of these pieces – we are delighted to welcome some of you tonight, including Jose Vergara and British artist, Piers Secunda.

Third, to the team in London and D.C. who worked so hard to put this together – in particular, our curator at the Embassy, Lester Oram.

And Joseph Angemi, the Senior Curator at the State Department’s Office of Cultural Heritage and the rest of his team back in America.

It’s not easy to work on an exhibition which is as emotional and hard-hitting as 9/11, but I commend you for the sensitive and respectful and positive way you’ve handled this, focusing not only on the tragedy of the day itself, but the decades of courage and hope and healing which followed.

Finally, I’d like to thank Lord Darroch for being here tonight.

As the Former Ambassador to the U.S., he’s someone I worked very closely with while I was Assistant Secretary.

He’s a diplomat with enormous experience and it’s my honor to invite him to add a few words of his own reflections this evening.

Remarks from Baron Darroch of Kew

Philip, since you arrived only a few weeks ago, can I begin by saying how great it is to see you here. You and I share a background in Balkan affairs, and you were Assistant Secretary for European Affairs for some of my time in Washington. And on the back of that experience, I need say no more than that we are very lucky to have you here in London.

11 September 2001 started as a normal day in the Foreign Office. I was at the time the Director of European Affairs. The day was the usual round of meetings and phone calls. And then, at 2pm, one of my team came into my office and said “you should switch on the TV; there is something you need to see”. So I did so, to see smoke and flames pouring out of the top of the North Tower of the World Trade Centre.  And then, two minutes later, the second plane hit the South Tower. Those moments remain imprinted in my memory as if they’d happened yesterday. And it felt as if the world stood still. In the Foreign Office, the corridors emptied and a horrified silence fell across the whole building. In every office, people were gathered around TV screens, gazing silently and in shock at the nightmare that was unfolding in front of them.

Almost 3,000 people died on 9/11 – among them 67 British citizens. It wasn’t, of course, just the twin towers: in my time in Washington I would, most weeks, drive past the memorial at the Pentagon to the 125 who died there when that American Airlines  flight crashed into the west side of the building. And then there were the passengers who challenged the terrorists on Flight 93, preventing an attack on one of the great buildings of Washington. This extraordinary exhibition around us brings all of this back, with images that, rightly, will never be forgotten. They are an enduring memorial to the worst terrorist atrocity in history and a reminder to us all of where hatred, fanaticism and inhumanity can take you.

We all sensed, I think, in those hours following the attacks that the world would never be the same again. 9/11 changed the course of history. The story since then has, I believe, been one of support and solidarity. Within 24 hours of the attack, NATO invoked, for the first and only time in it’s history, Article 5 of its founding Treaty on collective defence – that an attack on one is an attack on all. More than forty countries, one of the largest alliances in history including all of NATO, then participated in the military intervention in Afghanistan.

And at the centre of this has been the UK/US alliance. The defence, security and intelligence relationship between the UK and the US is unique; it is genuinely special. In my three years as National Security Adviser before going to Washington, I saw at close quarters just how closely we work together, how deeply integrated we are, how the whole is so much bigger than the sum of it’s parts. As we see on our tv screens almost weekly, global terrorism is an ever-present threat, and will remain so for at least a generation. The UK/US alliance delivers not just for our two nations but for the whole global community. It makes the world a safer place and long may it continue to do so.