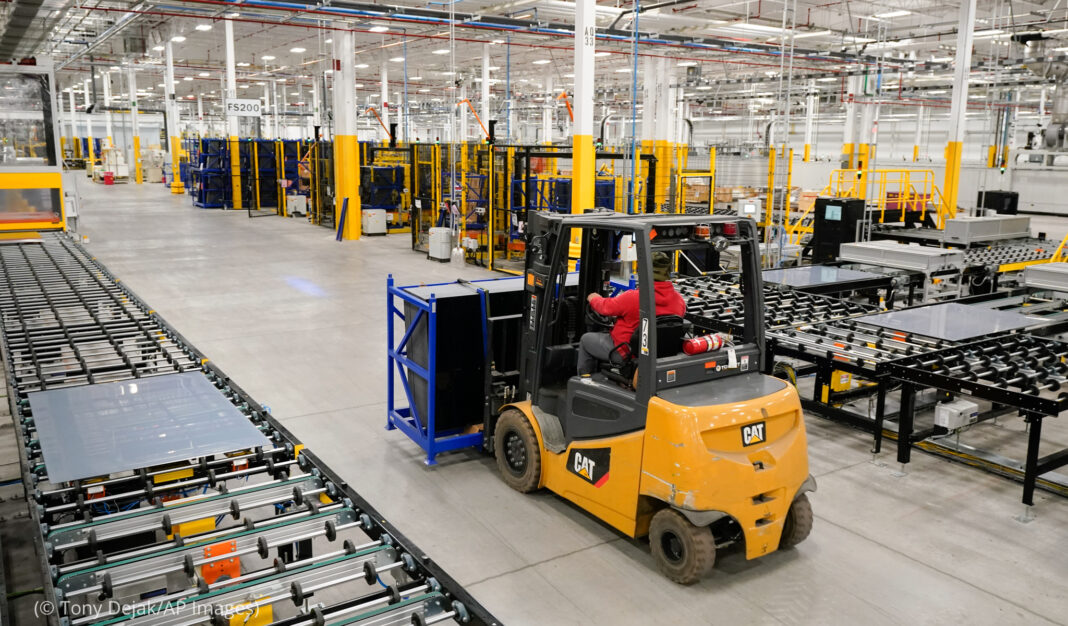 The United States is addressing the climate crisis while creating jobs to boost the economy.

Speaking at a Chatham House event on the urgency of global climate action, Special Presidential Envoy for Climate John Kerry called the solutions to climate change “the greatest economic opportunity we’ve seen on this planet since the Industrial Revolution.”

Companies in the wind and solar sectors — the two cheapest sources of clean energy in the country — have the potential to provide millions of jobs in the United States and abroad.

Solar brightens job opportunities
Solar energy could provide up to 1.5 million jobs in the United States by 2035, according to the U.S. Department of Energy.

Dan Conant founded Solar Holler — which trains and employs solar panel installation crews in West Virginia — after recognizing the demand for solar power in Appalachia, a region that historically relied on burning coal. Conant started his work in solar in Vermont and served as an adviser to the U.S. Department of Energy’s SunShot Initiative, a public-private program that helps keep solar energy affordable for Americans.

“Every person that we hire and train and give full-time work in the industry, they then become an ambassador for solar,” Conant told the nonprofit U.S. Green Building Council in 2017. “With a lot of the installations we’re doing, it’s the first time there’s ever been a solar installation in the town. We’re trying to expand the footprint, so it becomes less foreign and more familiar.”

To date, Solar Holler has installed panels across West Virginia and the neighboring states of Kentucky, Maryland and Ohio.

The United States currently sources about 8.4% of its total energy from wind turbines, but President Biden has set twin goals to create a carbon pollution–free power sector by 2035 and a net-zero emissions economy by 2050. By then, the U.S. Department of Energy projects, clean energies (PDF, 1.3MB)— especially wind power — will constitute 55% of the U.S. energy supply.

Ivan Morales has worked in Texas’ green energy sector for 13 years. He started as a wind turbine technician at the McAdoo, Texas, Wind Energy Center — a position he held for over a decade. He is now the operations and maintenance manager of the Samson Solar Energy Center in Northeast Texas.

Both centers are owned by Invenergy, an energy company based in Chicago that develops, owns and operates large-scale sustainable energy projects across the United States and around the world.

Morales began his career as an aviation mechanic. He says the skills from his aviation career helped him become a wind turbine technician.

“I feel like being well-rounded in multiple areas will definitely help you on the job,” he said. “Anytime up in the tower, you may run into an oil leak, you may run into a failed electrical contactor — there’s so many different things that can alter the operation of the turbine.”

Now, Morales says he has the chance to make an even bigger impact in clean energy. Once completed, the Samson Solar Energy Center will be the largest solar energy generation facility in the United States.

Morales said from what he’s seen, the number of clean energy jobs in the United States will continue to rise.

“Definitely renewables is the way of the future,” Morales said. “I think the overall direction we want to go as a country is green power, whether it be solar, whether it be wind.”