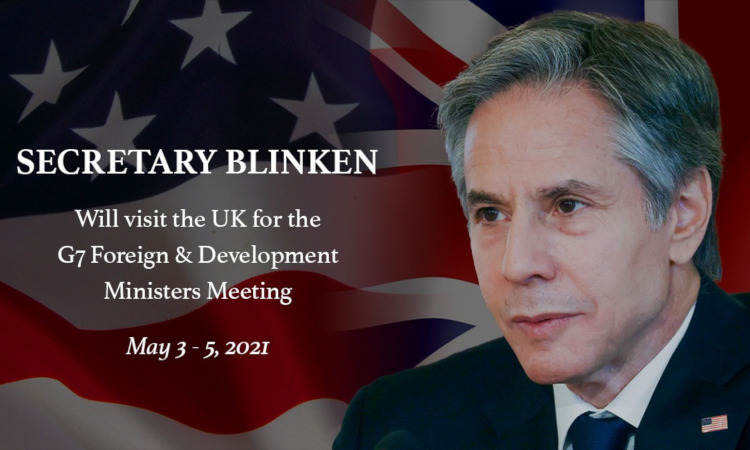 Secretary of State Antony Blinken is attending the G7 Foreign and Development Ministers’ Meeting in London, United Kingdom, May 3-5, 2021. The Secretary has said wherever the rules for international security and the global economy are being written, America will be there, and the interests of the American people will be front and center. We see the G7 as a crucial forum for that effort.

The Secretary is looking forward to discussing the democratic values that we share with our partners and allies within the G7. The United States will discuss how we can work with other countries to address the key geopolitical issues we face as we build back better from this pandemic. Tackling the COVID-19 and climate crises will feature prominently on the agenda, as will advancing economic growth, human rights, food security, gender equality, and women’s and girls’ empowerment.

Additional countries will join as guests at the Ministerial, including Australia, India, South Africa, the Republic of Korea, and Brunei in its capacity as Chair of ASEAN. The Secretary appreciates UK Foreign Secretary Dominic Raab extension of this invitation and the opportunity to engage directly with our partners and allies. These meetings will lay the groundwork for the 46th Leaders’ Summit in Cornwall in June.

While in the United Kingdom, the Secretary will meet with Prime Minister Boris Johnson and Foreign Secretary Raab to discuss shared U.S.-UK priorities related to addressing global issues and to affirm the strong alliance between our countries.

The Secretary will then travel to Kyiv, Ukraine, May 5-6, where he will meet with President Zelenskyy, Foreign Minister Kuleba, other officials, and representatives of Ukrainian civil society to reaffirm unwavering U.S. support for Ukraine’s sovereignty and territorial integrity in the face of Russia’s ongoing aggression. He will also encourage continued progress on Ukraine’s institutional reform agenda, particularly anti-corruption action, which is key to securing Ukraine’s democratic institutions, economic prosperity, and Euro-Atlantic future.