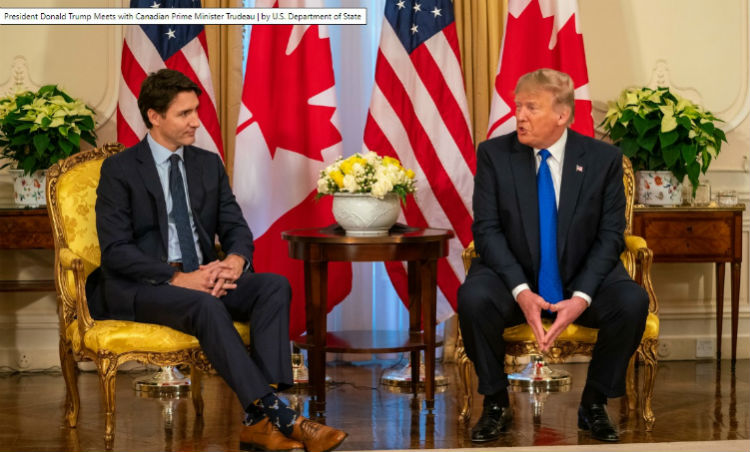 PRESIDENT TRUMP:  Well, thank you very much.  These are eight countries, plus us — plus the United States — that are fully paid.  They met the goal of 2 percent.  We call them the “2 percenters.”  Someday, we’ll raise it to 3 percent and 4 percent, maybe.  But, right now, we have it.

But these are countries that have not been delinquent.  They’ve been, in some cases, even more than 2 percent, because they feel so strongly about what we’re doing.  And that’s really a sign of respect for the United States.

And one of the gentlemen — I won’t mention who — but said it’s so important to have the United States as a part of NATO because of what we’ve done.  And just to make you all feel good, we will have spent, under what I’ve done, $2.5 trillion on the military.  Two and a half trillion.  So that pales in comparison when you look at what we’re talking about, right?  So it’s — but it’s two and a half of the greatest equipment in the world.  Every form of equipment known to mankind or womankind.

So I just want to thank these great countries.  And they are great.  They’ve become friends of mine, in many cases.  And they’re very respected within their own countries.  But these are countries that have met the goal of 2 percent.

We have, unfortunately, a large number that haven’t met the goal.  Some are very close, and they will be.  We’ve received an additional $130 billion a year.  And, I guess, if you go back three years, it’s perhaps even more than that.  But I’ve been doing this for three years.

And the Secretary General will tell you, in a few seconds; he’s going to say some — a little bit about it.  But when I first came, it was like a rollercoaster down, not up.  Down.  It was all the way down at the lowest point ever.  And since then, we’ve gone up massively.  And now we’ll be, by far, the highest point ever.

So it’s a great organization.  And we — we owe a lot to the Secretary General.  He’s been fantastic.  He’s done, really, a fantastic job.

And I want to thank you all.  And if you’d like to say something to the press, you can.  But, in the meantime, I’ll ask our great Secretary General to say a few words.

SECRETARY GENERAL STOLTENBERG:  Thank you so much, Mr. President.  And thank you so much for hosting this lunch with nine countries — or the eight plus one, the United States — that are spending 2 percent of GDP on defense.

It also demonstrates that your leadership on defense spending, Mr. President, is having an impact, because more Allies meet the 2 percent guideline.  All Allies have started to increase.  The majority of Allies have plans in place to meet the 2 percent guideline by 2024.  And the European Allies and Canada have added $130 billion to the defense budget since 2016.  And this number will be $400 billion by 2024.

So this is significant progress.  This is making NATO stronger.  This is unprecedented.  So, again, it’s great to be together with countries which are really investing in our shared security and showing that NATO is adapting, NATO is flexible, NATO is able to change when we need to respond to more demanding security environments.

So once again, thank you so much, Mr. President.

How about Poland?  Would you like to say something representing the group?

PRESIDENT DUDA:  Mr. President, thank you very much for this —

PRESIDENT DUDA:  — for the kind invitation.  And we are very glad that we are in this group of countries who feel responsibility for — not only for our own security, not only the security of our border, but also security of the whole Alliance.

And this approach, “NATO 360 degrees,” is one of the crucial elements of our Alliance and unity.  As we had very good discussion today, and we have, in my opinion, very important decision.  And this meeting today was the next step.  And it shows that we are united and we are together, and that the NATO Alliance is still alive and still in very good shape.

PRESIDENT TRUMP:  It is, indeed.  I think he would get fantastic television ratings with that — with the way he made that presentation.  (Laughter.)

How about my friend?  You want to say something?

PRESIDENT IOHANNIS:  Yes, thank you so much for — for inviting us.  I think this is an important sign for NATO, because we are — except for you, we are not the richest countries and, still, we believe in NATO.  We believe in the unity of NATO.  And we believe that NATO is extremely important for all of us.  So instilling this idea of burden sharing is extremely important, and I think our colleagues will follow our lead.  So thank you.

PRESIDENT TRUMP:  They will, actually.  And if they don’t, we’ll get them on trade.  One way or the other, they’re paying, folks — that, I can tell you.

Q    Just to clarify, sir, did you cancel the news conference?  You’re going to — you’re still going to do it?

Q    Did you cancel the news conference?  We weren’t clear.

PRESIDENT TRUMP:  Oh, yeah, I’ll cancel the news — I’ve done so many.  And I’m doing, I think, two more.  We’re meeting with Italy and Denmark.  So, I’m doing two more.  I think that’s enough.  There would be nothing to say.  So I won’t be — you’ll let the word out.  We’re doing — but we are doing Denmark and Italy right after this.  So we’re staying for two more bilats, and the press will be invited, okay?