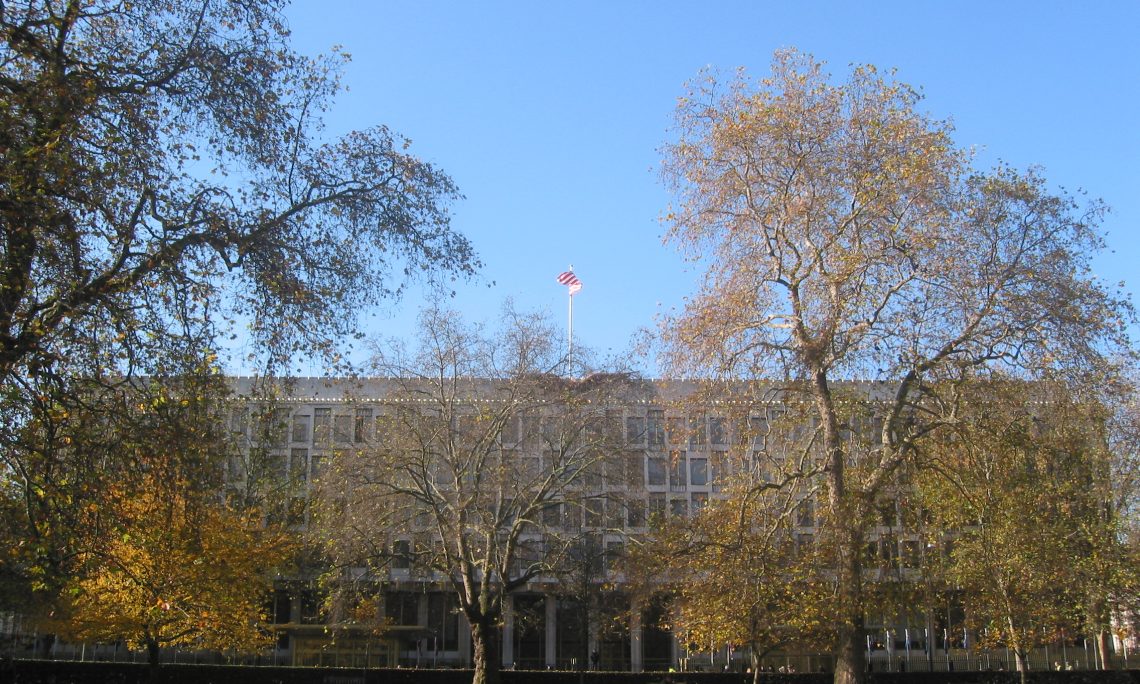 During the Second World War when the Chancery was on one side and General Eisenhower’s headquarters on another, Grosvenor Square became popularly known as “Little America.”

Ambassador John G. Winant (Ambassador from 1941-1946), living in an apartment above the Embassy during the Second World War, wrote of a garden very unlike that which can be seen today:

“In the Battle of Britain the lovely garden in the center of [Grosvenor Square] had been turned to more practical use. A group of W.A.A.F.’s and the blimp they called “Romeo” took shelter there. These W.A.A.F.’s were the first women’s crew to man a blimp. They lived in low wooden huts which covered what were once flower beds around the parkway. Diagonally across from the Embassy, General Eisenhower later established his headquarters and Admiral Stark had a building next door which housed the naval mission. On the other side of the square were further military installations and offices occupied by the overflow from the Embassy itself.”
—
A Letter From Grosvenor Square Hodder & Stoughton, 1947

History of Embassy in Grosvenor Square

The former U.S. Embassy building is located on Grosvenor Square in the elegant Mayfair area of London. The United States has been associated with Grosvenor Square since the late eighteenth century when John Adams, the first U.S. Minister to the Court of St. James’s, lived from 1785 to 1788 in the house which still stands on the corner of Brook and Duke Streets. John Adams later became President of the U.S., as did four other Ministers who served here: James Monroe, John Quincy Adams, Martin Van Buren, and James Buchanan. From the ranks of Ministers and Ambassadors who have served in London have also come four Vice Presidents and eleven Secretaries of State.

In 1947, the Duke of Westminster donated land in the center of the square as a memorial to President Franklin D. Roosevelt, and over 160,000 British citizens contributed funds for a commemorative statue. The present Chancery, occupying the whole west side of the square, was completed in 1960. The American architect Eero Saarinen won the U.S. Department of State competition for the design of a new Chancery for London.  (Eero Saarinen also designed the Gateway Arch in St Louis and oversaw the design of the the U.S. Air Force Academy Chapel in Colorado Springs).    The brief called for a building to house all the major sections of the Embassy under one roof in a style to blend with existing architecture of Grosvenor Square.

The resulting structure had over 600 rooms on nine floors. Only six stories, including a penthouse set back from the facade, are above ground level to conform in height with the surrounding buildings in Grosvenor Square. The remaining three floors are below ground. The U-shaped design of the building allows for its extension, if required for additional office space, by enclosure of the rear side. The facade is checkered with an open grillwork pattern supported on rows of concrete columns. The exterior is faced with Portland stone and decorated with gold anodized aluminum. The gilded aluminum eagle, with its 35-foot wingspread, surmounting the Chancery was created by American sculptor Theodore Roszak and is inspired by a pre-Independence carved wooden eagle in a New England museum. The main entrance in Grosvenor Square continues the motif of open grillwork in gold anodized aluminum with the Great Seal of the United States set into it. The fascia is made of Greek Pentillicon marble and the floor of Travertine marble from Italy.

The United States has been associated with Grosvenor Square in London’s Mayfair since the late eighteenth century when John Adams, the first United States Minister to the Court of St. James’s and the second President of the United States, lived from 1785 to 1788 in the house which still stands in Grosvenor Square on the corner of Brook and Duke Streets. The house is marked by a plaque erected by the Colonial Dames of America:

“In this House Lived
JOHN ADAMS
First American Minister to GREAT BRITAIN, May 1785 to
March 1788 Afterwards Second President of the UNITED STATES

From here his Daughter ABIGAIL was Married to
COLONEL WILLIAM STEPHENS SMITH, First Secretary
of the Legation and an Officer in the Revolutionary Army
on WASHINGTON’S staff.

JOHN ADAMS and ABIGAIL, his wife, through Character
and Personality, did much to Create Understanding between the Two
English speaking Countries

In their memory this Tablet is Placed by the
Colonial Dames of America 1933.”

The Roosevelt Memorial was funded in 1946 entirely through the sale of a souvenir brochure to the British public. This was the brain child of The Pilgrims, a society dedicated to the enhancement of friendship and understanding between Great Britain and America. So enthusiastic was the public response to the subscription that the total sum required was reached and exceeded in a mere six days from the day that British Prime Minister announced the opening of the appeal on the radio. More than 160,000 separate donations had been received. The Duke of Westminster donated land in the center of the square for the memorial.

On April 12, 1948, the statue was ceremonially unveiled by Eleanor Roosevelt and dedicated by U.S. Ambassador Lewis W. Douglas in front of an audience including the Royal Family, the Prime Minister Clement Attlee and the Leader of the Opposition Sir Winston Churchill.

The monument to the American Eagle Squadron pilots of World War II was unveiled on May 12, 1986. The first Eagle Squadron was formed in September 1940 mostly from American citizens who had volunteered to join the Royal Air Force. The Eagle Squadron memorial, sponsored by Hearst Corporation, is a tapering shaft of white Portland stone surmounted by a bronze sculpture of the American Bald Eagle.
Sculptor: Dame Elizabeth Frink (1930 – 1993)

“They came not as warriors in search of conflict, but rather as crusaders in the cause of liberty. They became brothers in arms to their British colleagues…”

The Eisenhower Statue, dedicated January 23, 1989, stands just across the road from the buildings that General Eisenhower occupied as Commander in Chief of the Allied Force (June – November 1942) and Supreme Commander, Allied Expeditionary Force (January – March 1944). During World War II Grosvenor Square was the nerve center of the American Armed Forces in Great Britain.

January 23, 1989
U.S. Ambassador Charles Price and Prime Minister Margaret Thatcher unveiled the statue of Dwight D. Eisenhower outside the American Embassy in London on the north-west corner of Grosvenor Square.

The memorial was given by the residents of Kansas City in recognition of the service of their fellow citizens. Eisenhower and Ambassador Charles Price and his wife were from the Kansas City region.

“Soldiers, Sailors, and Airmen of the Allied Expeditionary Force: You are about to embark upon a great crusade… the hopes and prayers of liberty-loving people everywhere march with you.”
Order of the Day, June 6, 1944

“The faith we hold belongs not to us alone but to the free of all the world.”
First Inaugural Address, January 20, 1953. 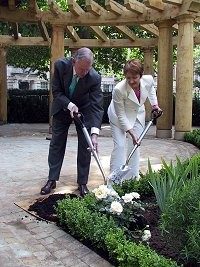 A permanent memorial garden to those who lost their lives in the United States on September 11, 2001 has been built by the British government in Grosvenor Square Garden, London, which is bordered on its west side by the U.S. Embassy. The memorial’s official opening was on September 11, 2003.

On Monday, July 7, 2003 Tessa Jowell, the U.K. Secretary of State for Culture, Media and Sport, and Ambassador William Farish planted white roses in memory of those who lost their lives in the September 11, 2001 attacks on the United States of America.

White roses have a special significance for the U.K. families of those who died on September 11. The white Bianca Rose formed part of HM The Queen’s bouquet at the Westminster Abbey service, and each of the families laid one white rose outside the Abbey, in an Act of Remembrance for their loved ones.

At the first anniversary service at St. Paul’s Cathedral, over 3000 white rose petals (one for each victim) cascaded from the Whispering Gallery to the Altar below. It is therefore fitting that white roses should form a significant part of the planting within the memorial garden.

The Diplomatic Gates in Grosvenor Square, a gift of the National Comittee for the Bicentennial of the Treaty of Paris, were dedicated on 10 May 1984 to commemorate the bicentennial of the Treaty of Paris and to honor those diplomats of Great Britain and the United States of America who have persevered in the tradition of John Hartley, Richard Oswald, Benjamin Franklin, John Jay, John Adams, and Henry Laurens by labouring steadfastly in the work of peace.

The Diplomatic Gates were a gift of the National Committee for the Bicentennial of the Treaty of Paris to the people of Great Britain. They were erected through the auspices of the UK Department of the Environment under the guidance of Mr. Peter Butler. The directing architect was Mr. A. John Kaye and the gates were built by Mr. A. F. Rolt of the Ornamental Ironwork Workshop. The inscription was designed by Mr Neil Simmons.

You can obtain an overview of the dedication ceremony (PDF, 135kb) and the remarks given by Joan R. Challinor, Chairman, the National Committee for the Bicentennial of the Treaty of Paris (PDF, 78kb).

On July 4th, 2011, the Ronald Reagan Foundation honoured President Ronald Reagan by erecting a ten foot tall bronze statue at the south-west corner of Grosvenor Square, outside the U.S. Embassy.

U.S. Ambassador Louis Susman gave the remarks at the unveiling of the Ronald Reagan Statue.