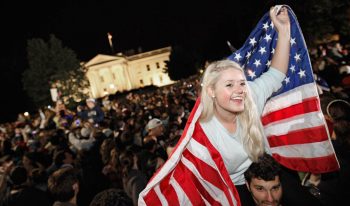 WASHINGTON, DC – MAY 01: Revelers gather at the fence on the north side of the White House, pose for photographs, chant “U.S.A.! U.S.A.!” and sing the Star Spangled Banner while U.S. President Barack Obama announces the death of Osama Bin Laden during a late evening statement to the press in the East Room of the White House May 1, 2011 in Washington, DC. Bin Laden has been killed near Islamabad, Pakistan almost a decade after the terrorist attacks of Sept. 11, 2001 and his body is in possession of the United States. (Photo by Chip Somodevilla/Getty Images)