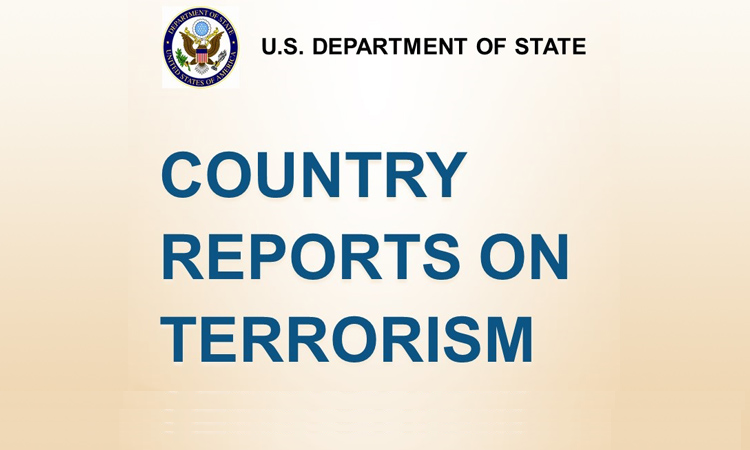 May 12, 2020
Condemning Heinous Terrorist Attacks in Afghanistan Today
The United States condemns in the strongest terms the two horrific terrorist attacks in Afghanistan today. In an unconscionable assault, gunmen seized one of Kabul’s busiest hospitals, which housed a maternity ward run by Doctors Without Borders. In the hospital, the terrorists took the lives of at least 13 innocent people, including newborn babies, new mothers, and health care workers. Any attack on innocents is unforgivable, but to attack infants and women in labor in the sanctuary of a hospital is an act of sheer evil.

January 20, 2020
Secretary Michael R. Pompeo At the Opening Plenary of the Third Western Hemisphere Counterterrorism Ministerial  (State.gov)
We call on all of our neighbors to adopt legal frameworks that enable them to sanction terrorists. We must increase information sharing between our intelligence and law enforcement agencies as well, and we must work together to make our institutions designated to combat terror more transparent and more effective. And we must rally other nations in the hemisphere to join the more than 20 of us who are here today.

April 30, 2019
After the Caliphate: A New Global Approach To Defeating ISIS (State.gov)

January 29, 2019
Meeting of Foreign Ministers of the Global Coalition to Defeat ISIS (State.gov)
U.S. Secretary of State Michael R. Pompeo will host a day of meetings with the foreign ministers of the Global Coalition to Defeat ISIS on February 6 in Washington, D.C. The full 79-member Coalition will meet for in-depth discussions on the impending territorial defeat of ISIS in Iraq and Syria, which is the result of four years of Coalition and our partners’ efforts, and a significant milestone towards delivering ISIS an enduring defeat. Ministers will discuss the next phase of the campaign in Iraq and Syria, which will focus on protecting against a resurgence of ISIS through stabilization and security assistance. Ministers will also discuss important next steps in degrading ISIS’s global networks and affiliates outside Iraq and Syria.

December 10, 2018
President Donald J. Trump Is Taking Action to Keep Weapons of Mass Destruction Out of the Hands of Terrorists (Whitehouse.gov)
“We must deny the terrorists safe haven, transit, funding, and any form of support for their vile and sinister ideology. We must drive them out of our nations.”

November 20, 2018
Statement from President Donald J. Trump on Standing with Saudi Arabia (Whitehouse.gov)
The crime against Jamal Khashoggi was a terrible one, and one that our country does not condone. Indeed, we have taken strong action against those already known to have participated in the murder. After great independent research, we now know many details of this horrible crime. We have already sanctioned 17 Saudis known to have been involved in the murder of Mr. Khashoggi, and the disposal of his body.

November 20, 2018
Treasury Designates Illicit Russia-Iran Oil Network Supporting the Assad Regime, Hizballah, and HAMAS (treasury.gov)
Today, the U.S. Department of the Treasury’s Office of Foreign Assets Control (OFAC) is designating nine targets in an international network through which the Iranian regime, working with Russian companies, provides millions of barrels of oil to the Syrian government. The Assad regime, in turn, facilitates the movement of hundreds of millions of U.S. dollars (USD) to the Islamic Revolutionary Guard Corps-Qods Force (IRGC-QF) for onward transfer to HAMAS and Hizballah. U.S. sanctions prohibit material support to the Government of Syria, including shipments of oil to Syrian government-controlled ports, as well as material support to designated terrorist groups.

September 18, 2018
Statement from the President on the National Biodefense Strategy and National Security Presidential Memorandum
“Today, I have taken action to better protect the American people by releasing a National Biodefense Strategy and signing a National Security Presidential Memorandum (NSPM) that will strengthen our Nation’s defenses against biological threats to health and safety. The implementation of these actions will promote a more efficient, coordinated, and accountable biodefense enterprise. Taken together, they represent a new direction in the Nation’s defense against biological threats.”

September 06, 2018
Joint Statement on the Salisbury Attack
We, the leaders of France, Germany, the United States, Canada, and the United Kingdom, reiterate our outrage at the use of a chemical nerve agent, known as Novichok, in Salisbury on 4 March. We welcome the progress made in the investigation into the poisoning of Sergei and Yulia Skripal, and take note of the attempted murder charges brought yesterday against two suspects. We commend the work of the UK Police and all those involved in this investigation.

June 26, 2018
Readout of the Meeting in Morocco of the Global Coalition to Defeat ISIS (state.gov)
Senior diplomatic representatives from the Global Coalition to Defeat ISIS met today in Morocco to review the global campaign. Special Presidential Envoy for the Global Coalition Brett McGurk provided an update on progress in Iraq and Syria and outlined the Coalition’s increasing focus on defeating ISIS’s global networks. He noted that Operation Roundup in Syria, now in its second phase, has retaken the ISIS stronghold of Dashisha. They continue to make steady progress, as the Syrian Democratic Forces work in coordination with Iraqi Security Forces to trap ISIS’s remaining remnants and ensure they have no escape. The Coalition has liberated more than 7.7 million people from ISIS to date and allowed more than 3.8 million displaced Iraqis to return to their homes.

October 02, 2017
Presidential Proclamation Honoring the Victims of the Tragedy in Las Vegas, Nevada (via Whitehouse.gov)
“As a mark of respect for the victims of the senseless act of violence perpetrated on October 1, 2017, by the authority vested in me as President of the United States by the Constitution and the laws of the United States of America, I hereby order that the flag of the United States shall be flown at half-staff at the White House and upon all public buildings and grounds, at all military posts and naval stations, and on all naval vessels of the Federal Government in the District of Columbia and throughout the United States and its Territories and possessions until sunset, October 6, 2017. I also direct that the flag shall be flown at half-staff for the same length of time at all United States embassies, legations, consular offices, and other facilities abroad, including all military facilities and naval vessels and stations.”

September 11, 2017
Notice Regarding the Continuation of the National Emergency with Respect to Certain Terrorist Attacks (Whitehouse.gov)

05 July 2017
Meeting of the Global Coalition to Defeat ISIS   Special Presidential Envoy for the Global Coalition to Defeat ISIS Brett McGurk will host senior leaders of the Coalition for a series of meetings in Washington D.C next week.  … These meetings are taking place at a key moment in the coordinated fight and will help shape the combined efforts to destroy ISIS. Through Coalition support, Mosul is on the verge of liberation by the Iraqi Security Forces, and the Syrian Democratic Forces have taken the fight against ISIS directly to Raqqa. As ISIS is defeated on the battlefield, the Coalition will continue to increase its stabilization efforts to facilitate the voluntary return home of those who have been displaced by the violence.

19 June 2017
United States Condemns Attack Outside of London Mosque “The United States strongly condemns last night’s attack that appears to have targeted Muslim worshippers in London. We extend our sympathies to the families and community of the victims and our hopes for the quick recovery of those wounded.
We commend the work of the first responders, and the courage of bystanders who apprehended the attacker and held him until authorities arrived. The United States stands ready to provide any assistance that UK officials would find helpful in this difficult time.
The United States stands in solidarity with the United Kingdom in the face of this terrorist attack and emphasizes our shared resolve to counter the plague of terrorism. ”

03 June 2017 United States Condemns Attacks in London    “The United States condemns the cowardly attacks targeting innocent civilians in London this evening. We understand U.K. police are currently treating these as terrorist incidents. The United States stands ready to provide any assistance authorities in the United Kingdom may request.  Our hearts are with the families and loved ones of the victims. We wish a full and quick recovery to those injured in the attacks. All Americans stand in solidarity with the people of the United Kingdom.”

30 May 2017 State Department on the Terrorist Attacks in Baghdad  “We condemn in the strongest possible terms the recent barbaric attacks carried out by ISIS terrorists in Baghdad. These brutal attacks, whose victims included innocent children breaking the Ramadan fast and elderly Iraqis collecting their pensions, demonstrate once again the wanton savagery of the enemy we face. ”

10 May 2017 Rewards for Justice – Reward Offer for Information on al-Nusrah Front Leader Muhammad al-Jawlani (via State.gov)  The U.S. Department of State’s Rewards for Justice Program is offering a reward of up to $10 million for information leading to the identification or location of Muhammad al-Jawlani, leader of the al-Nusrah Front (ANF) terrorist group.

This is the first Rewards for Justice reward offer for a leader of al-Nusrah Front, the Syrian branch of al-Qaida.

22 March 2017 Statement by Secretary of State Tillerson on the Attack in London   “On behalf of the United States, I express my condolences to the victims and their families.  The American people send their thoughts and prayers to the people of the United Kingdom. We condemn these horrific acts of violence, and whether they were carried out by troubled individuals or by terrorists, the victims know no difference.”

22 March 2017 Global Coalition against ISIS meets in Washington (ShareAmerica)    Foreign ministers and senior officials from 68 nations and international organizations gather in Washington on March 22 to discuss the coalition’s efforts to defeat ISIS.  The meeting comes at a key moment to set ISIS on a lasting and irreversible path to defeat. Secretary of State Rex Tillerson will open the meeting, the first one of the full 68-member Global Coalition since December 2014.
Coalition members are united in a common goal: to defeat ISIS with a robust approach. The coalition’s combined efforts have diminished ISIS’ territory, leadership, financial resources and online influence.

28 January 2017 Presidential Memorandum Plan to Defeat the Islamic State of Iraq and Syria (Whitehouse.gov)   “pIslamic State of Iraq and Syria[ has engaged in a systematic campaign of persecution and extermination in those territories it enters or controls.  If ISIS is left in power, the threat that it poses will only grow.  We know it has attempted to develop chemical weapons capability.  It continues to radicalize our own citizens, and its attacks against our allies and partners continue to mount.  The United States must take decisive action to defeat ISIS.”

The Country Reports on Terrorism are submitted in compliance with Title 22 of the United States Code, Section 2656f (the “Act”), which requires the Department of State to provide to Congress a full and complete annual report on terrorism for those countries and groups meeting the criteria of the Act.

From Chapter 1 ( Strategic Assessment) of the Report:  The global terrorist threat continued to evolve rapidly in 2015, becoming increasingly decentralized and diffuse. Terrorist groups continued to exploit an absence of credible and effective state institutions, where avenues for free and peaceful expression of opinion were blocked, justice systems lacked credibility, and where security force abuses and government corruption went unchecked.