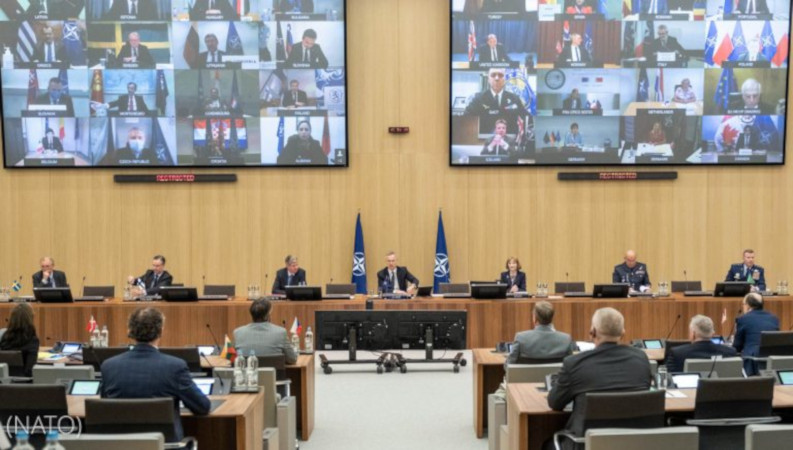 April 02, 2020
Declaration by NATO Foreign Ministers issued following their meeting of 2nd April 2020
“We, the Ministers of Foreign Affairs of NATO, meet today in the midst of an unprecedented pandemic which is affecting all Allies and partners, imposing a huge cost in lives lost, as well as a sudden and severe shock to our economies. We express our deepest sympathies with all the victims of the Coronavirus disease (COVID-19) and with all those affected by its consequences. We pay tribute to the health care workers, as well as all the others who are on the front line in our battle against this disease. These include the men and women in uniform who continue to work daily for our collective security. And we thank our citizens who understand that, working together, we will defeat this challenge more quickly and save lives.”

December 04, 2019
NATO Summit 2019 London Declaration
Today, we gather in London, NATO’s first home, to celebrate seventy years of the strongest and most successful Alliance in history, and mark the thirtieth anniversary of the fall of the Iron Curtain.  NATO guarantees the security of our territory and our one billion citizens, our freedom, and the values we share, including democracy, individual liberty, human rights, and the rule of law.  Solidarity, unity, and cohesion are cornerstone principles of our Alliance.

May 22, 2019
NATO Secretary General announces dates for the Summit of NATO Heads of State and Government in London
“I am happy to announce that the next Summit of Allied leaders will take place on 3-4 December 2019 in London to mark NATO’s 70th anniversary. I discussed preparations for the event with Prime Minister Theresa May at 10 Downing Street last week (14 May) and I thanked the United Kingdom for agreeing to host the event.”

May 08, 2019
Message to the Congress on Designating Brazil as a Major Non-NATO Ally
In accordance with section 517 of the Foreign Assistance Act of 1961, as amended (22 U.S.C. 2321k), I am providing notice of my intent to designate Brazil as a Major Non-NATO Ally.
I am making this designation in recognition of the Government of Brazil’s recent commitments to increase defense cooperation with the United States, and in recognition of our own national interest in deepening our defense coordination with Brazil.

Full details of the program are available on the NATO website.

April 03, 2019
Secretary Pompeo’s Remarks at the Reception to Celebrate NATO’s 70th Anniversary
When the treaty was signed on April 4th in 1949, in this very room, President Harry S. Truman spoke of our collective aspirations. He called NATO, quote, “a shield against aggression” and “a bulwark which will permit us to get on with the real business of government and society – the business of achieving a fuller and happier life for every one of our citizens.”

April 01, 2019
An unshakable commitment: The U.S. and NATO
2019 marks the 70th anniversary of the North Atlantic Treaty Organization (NATO).  Every American president since Harry Truman, who championed NATO’s creation in 1949, has reaffirmed the United States’ commitment to the principle of collective defense, which makes up the core of this now 29-nation alliance.

March 28, 2019
A rare glimpse of the document that started NATO
As the North Atlantic Treaty Organization (NATO) marks its 70th anniversary and its member countries prepare for the April 3-4 meeting of NATO foreign ministers in Washington, the National Archives Museum is offering a rare opportunity to view the treaty.

March 22, 2019
Secretary Pompeo’s Call With NATO Secretary General Jens Stoltenberg
Secretary of State Michael R. Pompeo spoke today with NATO Secretary General Jens Stoltenberg. They discussed plans for the meeting of NATO Foreign Ministers to be held April 3-4 in Washington, DC where Allies will mark the 70th anniversary of NATO’s founding and take stock of the Alliance’s efforts to address the full range of challenges facing the Alliance. 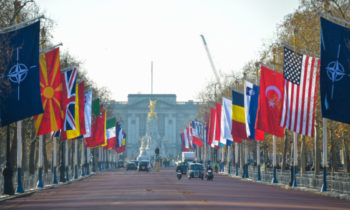 February 06, 2019
Secretary General announces NATO Heads of State and Government will meet in London
“I am pleased to announce that Allies have agreed that the next meeting of NATO Heads of State and Government will take place in London in December 2019.
We are grateful to the United Kingdom for agreeing to host this meeting in NATO’s 70th anniversary year. London was the home of NATO’s first headquarters. The United Kingdom was one of the Alliance’s twelve founding members and continues to play a key role in the Alliance, making essential contributions to our shared security.”

April 27, 2018
Ahead of the first official session of NATO Foreign Ministers, U.S. Secretary of State Pompeo greeted NATO Secretary General Jens Stoltenberg: “As soon as I was sworn in, I hopped on a plane & came here. There’s a reason for that. Our work here is invaluable.”

April 26, 2018
Press Briefing by Ambassador Kay Bailey Hutchison, U.S. Permanent Representative to NATO (via usmission.gov)    “America is committed to a strong NATO Alliance and our NATO Allies are also strong on unity and resolve to have an umbrella against Russian aggression, to try to be a leader in counter-terrorism. Our mission in Afghanistan, where I have been twice in the last six months, is one that has a chance to stop terrorism where it is, protect all of our people, and to also have a country that we can leave that will be able to function with human rights and dignity and rule of law and good government.”

February 15, 2018
Press Briefing by Secretary of Defense James N. Mattis at U.S. Mission to NATO (via usmission.gov)
“We just concluded, as you know, our NATO Defense Ministerial where General — Secretary General Stoltenberg just said that NATO remains committed to projecting stability beyond its borders, and in a world awash in change, NATO stands firm as an island of stability in a turbulent sea.
Projecting stability requires NATO’s political stance to be backed by a credible military force that is fit to fight, reducing the chance for miscalculation.
To be fit for our time, NATO deterrence and defense posture must continue to adapt. During the ministerial, we discussed strategic nuclear deterrence issues, to include America’s recently released 2018 Nuclear Posture Review on which many of our allies were consulted. And it was very well received — the review was very well received across NATO.”

May 25, 2017
NATO: Standing strong together and contributing equally   On May 25, in Brussels, President Donald J. Trump, speaking at NATO headquarters next to a twisted metal girder from New York’s World Trade Center, vowed that by standing together the NATO Allies will vanquish the “barbaric evil” of terrorism:

May 25, 2017
A Virginia city parades its support for NATO   With bands playing and onlookers cheering, the NATO Parade of Nations steps off each spring through the streets not of Brussels — NATO’s headquarters — but Norfolk, Virginia, a historic naval town that takes pride in its role in keeping the trans-Atlantic alliance strong.

March 21, 2017
Statement by the Press Secretary on President Trump’s Travel to Brussels and NATO Meetings      President Donald J. Trump will travel to Brussels, Belgium, for the 25 May 2017, meeting of the North Atlantic Treaty Organization (NATO) Heads of State and Government.

January 20, 2017
Mattis Takes Oath as 26th Defense Secretary (via Defense.gov)     By a 98-1 vote, the Senate today confirmed retired Marine Corps Gen. James Mattis to be the 26th secretary of defense, and Vice President Michael R. Pence administered his oath of office shortly afterward.
Mattis is the first retired general officer to hold the position since General of the Army George C. Marshall in the early 1950s. Congress passed a waiver for the retired four-star general to serve in the position, because law requires former service members to have been out of uniform for at least seven years to serve as defense secretary. Mattis retired from the Marine Corps in 2013.

The principle of collective defence is at the very heart of NATO’s founding treaty. It remains a unique and enduring principle that binds its members together, committing them to protect each other and setting a spirit of solidarity within the Alliance.