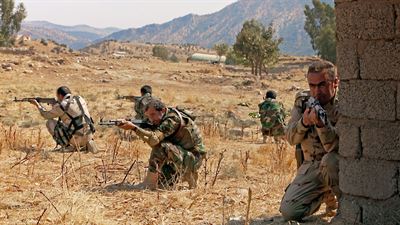 May 07, 2019
Secretary Pompeo’s Remarks to Traveling Press En-route to Baghdad, Iraq
So the reason we’re going is you’ve all seen the reports that there have been escalating – information that indicates that Iran is escalating their activity. I wanted to go to Baghdad to speak with the leadership there, to assure them that we stood ready to continue to ensure that Iraq was a sovereign, independent nation, and that the United States would continue to help build out partners in the region – the Jordanians, the Saudis, the Emiratis, all of the Gulf states who want to see a free, independent, sovereign Iraq.

October 16, 2017
State Department on the Situation Near Kirkuk, Iraq The United States is very concerned by reports of violence around Kirkuk, Iraq. We are monitoring the situation closely and call on all parties to coordinate military activities and restore calm.
We support the peaceful exercise of joint administration by the central and regional governments, consistent with the Iraqi Constitution, in all disputed areas. We are working with officials from the central and regional governments to reduce tensions, avoid further clashes, and encourage dialogue.

October 10, 2017
NATO improves Iraq’s civil-military ties    The end is near for ISIS in Iraq, but the enormous task of rebuilding cities that have been left in ruins by the militants is just beginning.As millions of refugees look to return home, Iraq’s military and civilian ministries all have critical roles in keeping them safe and restoring basic services — food, water, electricity, sanitation, health care and more — damaged or destroyed during ISIS’s brutal rule.
So the North Atlantic Treaty Organization (NATO) is helping Iraq’s ministries work more closely together.

March 06, 2015
On Daesh’s Destruction of Historical Heritage in Iraq