U.S. Secretary of State Michael R. Pompeo delivers remarks to the media in the Press Briefing Room, at the Department of State in Washington, D.C., on June 10, 2020.

This report covers the period between January 01 and December 31, 2019.

February 13, 2020
Senior State Department Official On State Department 2019 Successes on Democracy, Human Rights, and Labor Issues
“And looking back on the past year, I wanted to highlight some of the main accomplishments of our bureau, the Bureau of Democracy, Human Rights, and Labor, as well as look ahead and talk about some of our priorities. The United States has been and will always remain a staunch promoter of human rights, fundamental freedoms, and human dignity, and a supporter of those who strive to defend and protect them, often at great personal risk. The Trump administration has made the protection and promotion of human rights a priority.”

February 12, 2020
A monument to U.S. women’s right to vote turns 100
Susan B. Anthony, Lucretia Mott and Elizabeth Cady Stanton dedicated their lives to the cause of women’s suffrage — the legal right for women to vote in the United States.
American sculptor Adelaide Johnson captured this struggle in marble a century ago. Her sculpture, Portrait Monument to Lucretia Mott, Elizabeth Cady Stanton and Susan B. Anthony (1920), portrays the early suffragettes who started the movement that led to the 19th Amendment, which in 1920 gave women the right to vote.

March 13, 2019
Secretary Pompeo’s Remarks on the Release of the 2018 Country Reports on Human Rights Practices (State.gov)

March 08, 2019
U.S. efforts to Promote Religious Freedom and Interfaith Tolerance
Special Advisor for Religious Minorities Knox Thames (biography) highlights the U.S. commitment to defending the rights of individuals to believe (or not believe) free from discrimination or violence.

March 07, 2019
Ambassador Johnson Hosts Women In STEM Panel Discussion
For International Women’s Day Ambassador Johnson opened our #WomenInSTEM discussion speaking about the importance of encouraging more women into the STEM (Science, Technology, Engineering and Mathematics) sector and the value they add to the industry as a whole.

During our International Womens Day event we asked our guests to make pledges on what they will do to #BalanceforBetter – here’s some of their great answers:

March 07,2019
Secretary of State Michael R. Pompeo At the International Women of Courage (IWOC) Awards Ceremony (State.gov)
Secretary Pompeo, along with First Lady Melania Trump, honored women from around the world with the International Women of Courage (IWOC) Award in a public ceremony. This award honors women who have demonstrated exceptional courage, strength, and leadership in acting to improve the lives of others, from families to communities to countries. It is an extraordinary opportunity to bring attention and support to women who have put their lives and/or personal safety at risk in order to improve their societies and inspire fellow citizens. Through IWOC, now in its thirteenth year, the U.S. Department of State has honored over 120 courageous women from more than 65 countries.

November 27, 2018
U.S. joins in the 16 Days of Activism Against Gender-Based Violence  (ShareAmerica)
Violence against women is a global issue that affects millions every year. Secretary of State Mike Pompeo said the U.S. is proud to take action on “Ending Gender-Based Violence in the World of Work,” this year’s theme for the 16 Days of Activism that begin November 25. “Societies that empower women to participate fully in civic and economic life are more prosperous and peaceful,” he said.

September 19, 2018
Coordinator for Counterterrorism Nathan A. Sales on the Release of the Country Reports on Terrorism 2017
“While numerous countries saw a decline in terrorist violence between 2016 and 2017, this overall trend was largely due to dramatically fewer attacks and deaths in Iraq. Although terrorist attacks took place in 100 countries in 2017, they were concentrated geographically. Fifty-nine percent of all attacks took place in five countries. Those are Afghanistan, India, Iraq, Pakistan, and the Philippines. Similarly, 70 percent of all deaths due to terrorist attacks took place in five countries, and those are Afghanistan, Iraq, Nigeria, Somalia, and Syria.
The report notes a number of major strides that the United States and our international partners made to defeat and degrade terrorist organizations in 2017. We worked with allies and partners around the world to expand information sharing, improve aviation security, enhance law enforcement and rule of law capacities, and to counter terrorist radicalization with a focus on preventing recruitment and recidivism.”

September 15, 2018
International Day of Democracy
On this International Day of Democracy, the United States reaffirms its unwavering belief in democracy as the form of government with the greatest capacity to advance peace, prosperity, and security, and to safeguard the universal human rights, fundamental freedoms, and dignity of every person. Enshrined in our own Constitution are bedrock principles essential to the success of any democracy, including freedom of expression, the right to peaceful assembly, respect for the rule of law, and a commitment to the peaceful transfer of political power through free and fair elections.

September 05, 2018
U.S. ends support for ‘flawed’ U.N. Palestinian refugee agency (ShareAmerica)
The United States is cutting all contributions to the U.N. agency for Palestinian refugees and calling upon the international community to find new ways to help Palestinians.
The United States has been by far the most generous donor to the U.N. Relief and Works Agency for Palestine Refugees in the Near East (UNRWA), created in 1949 to help refugees displaced by the Arab-Israeli war of 1948.

“The Human Rights Council has become an exercise in shameless hypocrisy — with many of the world’s worst human rights abuses going ignored, and some of the world’s most serious offenders sitting on the council itself,” Secretary of State Mike Pompeo said in a press conference at the State Department with U.S. Ambassador to the United Nations Nikki Haley.

May 29, 2018
Release of the 2017 Annual Report on International Religious Freedom (State.gov)
Secretary of State Pompeo called religious freedom “a right belonging to every individual on the globe” and said the U.S. “stands with those who yearn for religious liberty.”
Pompeo spoke May 29 as the State Department released the 2017 International Religious Freedom Report describing the state of religious freedom in countries around the world.

This report covers the period between January 1 and December 31, 2017 allows access to all separate sections as well as the creation of a custom report: 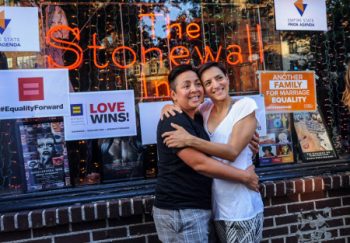 A couple hugs outside the Stonewall Inn, considered the birthplace of the modern civil rights movement for the LGBTI community. (© AP Images)

April 20, 2018
Remarks on the Release of the 2017 Country Reports on Human Rights Practices (State.gov)
SPOKESPOERSON NAUERT: “Good afternoon, everyone. Thank you so much for coming, especially on a Friday. Today the State Department released the 2017 Country Reports on Human Rights Practices. Promoting freedom – promoting and defending human rights and fundamental freedoms are central to who we are as a country, and the United States will continue to support those around the world struggling for human dignity and liberty.
This is the 42nd annual Human Rights Report that the department has now released. We’re delighted to have our Acting Secretary of State, John Sullivan, with us here today to say a few words about this report. After Acting Secretary Sullivan’s remarks, we will invite Ambassador Michael Kozak to the podium to answer some of your questions. I will help facilitate, as we all know one another, and assist with that.”

“Human trafficking is one of the most tragic human rights issues of our time. It splinters families, distorts global markets, undermines the rule of law, and spurs other transnational criminal activity. It threatens public safety and national security.  But worst of all, the crime robs human beings of their freedom and their dignity. That’s why we must pursue an end to the scourge of human trafficking. Today we take another key step towards that goal. The 2017 Trafficking in Persons Report highlights the successes achieved and the remaining challenges before us on this important global issue.”

May 17, 2017 U.S. State Department Issues Report on Human Rights Sanctions on Iran (State.gov)   The State Department released today its semi-annual report to Congress detailing sanctions imposed on persons involved in human rights abuses in Iran. The report cites recent sanctions against the Tehran Prisons Organization and Sohrab Soleimani, the former head of the Tehran Prisons Organization, as required by the Comprehensive Iran Sanctions Accountability and Divestment Act of 2010, as amended by the Iran Threat Reduction and Syria Human Rights Act of 2012.

March 06, 2017 State Department releases Human Rights Report for 2016 (via State.gov)   “Promoting human rights and democratic governance is a core element of U.S. foreign policy. These values form an essential foundation of stable, secure, and functioning societies. Standing up for human rights and democracy is not just a moral imperative but is in the best interests of the United States in making the world more stable and secure. The 2016 Country Reports on Human Rights Practices (The Human Rights Reports) demonstrate the United States’ unwavering commitment to advancing liberty, human dignity, and global prosperity.
This year marks the 41st year the Department of State has produced annual Human Rights Reports. The United States Congress mandated these reports to provide policymakers with a holistic and accurate accounting of human rights conditions in nearly 200 countries and territories worldwide, including all member states of the United Nations and any country receiving U.S. foreign assistance. The reports cover internationally recognized individual civil, political, and worker rights, as set forth in the Universal Declaration of Human Rights and other international instruments.”

09 May 2016 Will the U.S. get a monument to gay rights? The U.S. could have its first national monument dedicated to the gay rights movement just in time for next month’s lesbian, gay, bisexual, transgender and intersex (LGBTI) Pride Month.  [Today] state and federal officials and the U.S. public will consider whether to dedicate a national park to the history of the Stonewall Uprising, which inspired the modern LGBTI civil rights movement in the U.S.
Demonstrations protesting a police raid on the Stonewall Inn bar began in the early morning of June 28, 1969, on Christopher Street in New York’s Greenwich Village neighborhood. Stonewall Inn was then one of the few establishments in the country that welcomed homosexuals. Within weeks of the raid, Village residents had organized into activist groups to establish places where gays and lesbians could be open about their sexual orientation.
In the mid-1990s, the movement for equal rights expanded to include bisexuals and transgender people. Today, it also advocates for the rights of intersex individuals.

29 March 2016 Women’s History Month: It’s Not About the Award. It’s About Women’s Lives   When Sharmeen Obaid-Chinoy accepted the Academy Award for her short documentary film A Girl in the River: The Price of Forgiveness, about a woman who survives a planned honor killing, she got straight to the point: “This is what happens when determined women get together.” She acknowledged men too — men who push women “to go to school and work and who want a more just society for women.”