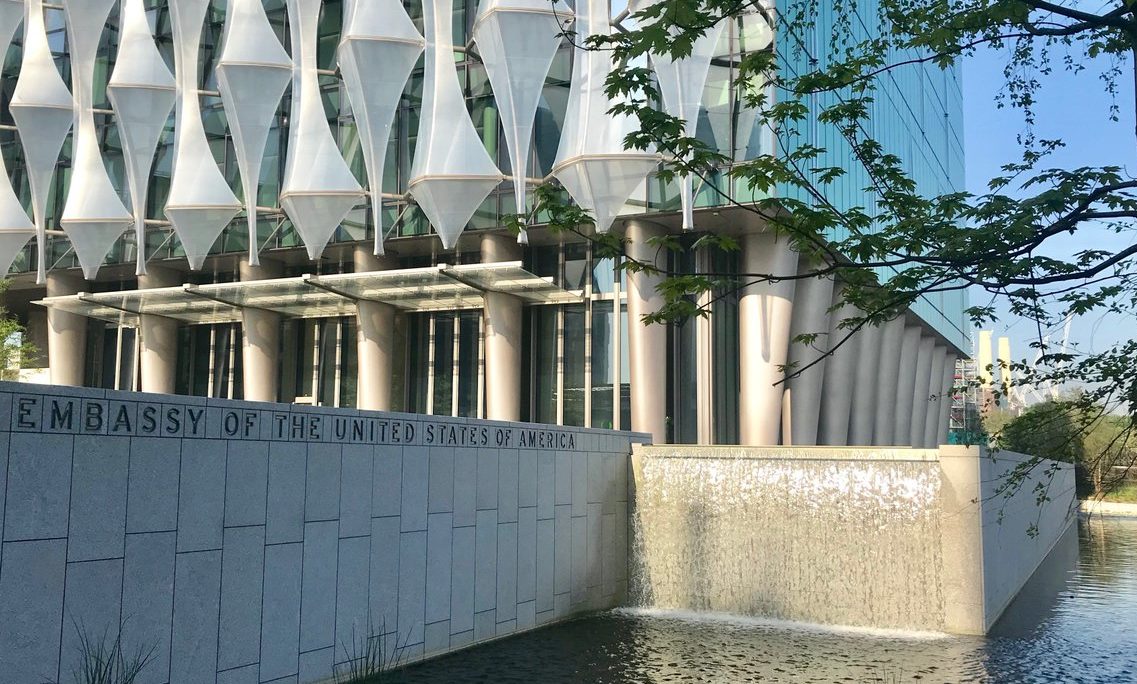 The U.S. Embassy London is centrally located in the Nine Elms district, a revitalized industrial neighborhood close to the center of London that was historically part of the royal Vauxhall Gardens. Overlooking the River Thames, the Embassy is deeply connected to its immediate neighborhood, the Borough of Wandsworth, Central London, the newly constructed linear park, and improved access to public transportation and the River Thames.

The U.S. government was one of the first institutions to buy into the visions for Nine Elms. The investment was a watershed moment in the area’s transformation, and provided an anchor for more businesses and jobs, bringing thousands of new neighbors to fuel economic revitalization. The Nine Elms site is closer to the United Kingdom’s major government offices and the Houses of Parliament that the previous Mayfair location.

The Embassy site is a working landscape that incorporates a range of sustainable technologies, including a pond that is integral to the site’s stormwater management. Oak trees provide shade along the campus perimeter and linear park. Trees throughout the landscape are native to floodplain and riverbank habitats and are especially well suited to the site’s location alongside the River Thames.

The remainder of the Embassy’s plant palette is inspired by the shared history of the United States and the United Kingdom. Planted with tall grasses and wildflowers, the landscape is reminiscent of both the expansive, rolling American prairies and the site’s early history as a River Thames wetland.

The Embassy building, designed by Philadelphia-based architecture firm KieranTimberlake, is a translucent crystalline cube that gives form to core democratic values of transparency, openness, and equality. Its unique façade affords generous natural light throughout the interior and takes advantage of the site’s striking views.

The high-performance façade uses laminated glazing with an outer envelope of ethylene tetrafluoroethylene. The envelope prevents excessive solar gain and mitigates glare while uniformly distributing daylight throughout the building. This reduces the energy required to cool and light the building.

Each of the interior gardens is inspired by a different region of the United States, including the Canyonlands, the Gulf Coast, the Midwest, the Potomac River Valley, the Pacific Forest, and the Mid-Atlantic. The garden plantings not only represent the diversity of the Unite States’ landscape, they were also selected for their capacity to thrive in specific garden orientations. 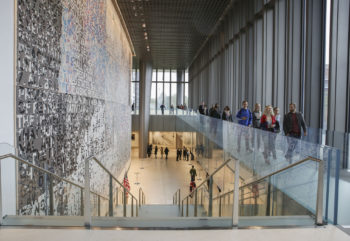 The building’s energy efficient design conserves as much energy as possible through strategies such as daylight-responsive lighting and shade controls, passive and active chilled beams, efficient mechanical systems, and Combined Heat and Power generation.The building harnesses renewable resources including solar energy gathered by photovoltaic cells and geothermal energy generated through ground source heat pumps, which use the consistent temperature of the earth to heat and cool the building.

The Embassy pond is at the center of an integrated water system that aims to retain all rainwater that falls on the site and prevent pollution from flowing into local waterways. Additionally, the pond naturally irrigates the surrounding landscape. Captured and treated rainwater is used in toilets, mechanical systems, and interior garden irrigation.

The Embassy is a physical manifestation of the long-term commitment to the special relationship between the United States and the United Kingdom. Thousands of Embassy visitors benefit from a modern, secure and accessible facility that fully supports the most active and important bilateral relationships in the world.

Photos from our new Embassy Chancery are the following Flickr albums:

High resolution images of the winning design concept are available too:

Were you looking for graphics and logos?