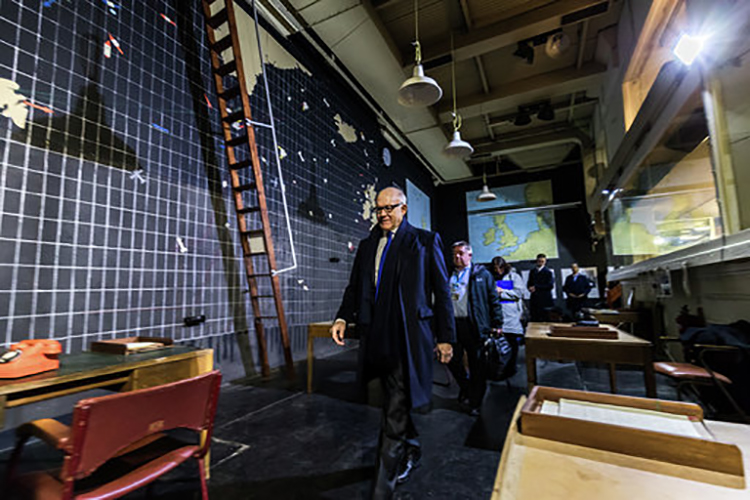 March 26, 2020
China’s Secrets and Lies turned COVID-19 Into a Global Threat (Op-ed in The Times)
Ambassador Johnson: “It is bad enough when conspiracy-theory cranks spread dangerous misinformation around the world. It is far worse, and more dangerous, when malign misinformation is spread by a government’s officials. And that is exactly what the People’s Republic of China has been doing, spreading false accusations about the origin and spread of the coronavirus.”

January 26, 2020
Ambassador Johnson’s Letter to the Sunday Times (www.TheSundayTimes.co.uk)
In his Letter to the Editor in today’s The Sunday Times notes that American food is safe, nutritious and delicious! Including U.S. agriculture in a U.S.-UK Free Trade Agreement (FTA) will open markets for American & British farmers AND offer more choice for our consumers.

December 01, 2019
America is committed to NATO and NATO must be United Against Russia and China
Ambassador Johnson’s op-ed in today’s Telegraph.

May 27, 2019
Ambassador Johnson’s Remarks at the Cambridge American Cemetery on Memorial Day 2019
“We could not have asked any more of our D-Day heroes.They were truly part of our ‘Greatest Generation’.And today, we remember them with pride and with gratitude.”

May 16, 2019
To celebrate World Bee Day, Ambassador Johnson hosted a “World Bee Day Reception” at Winfield House! Photos are on our Flickr album.

May 03, 2019
This evening Ambassador Johnson hosted U.S. Energy Secretary Rick Perry, Under Secretary for Nuclear Security and NNSA Administrator Lisa Gordon-Hagerty and a great group of U.S.-UK nuclear security experts, first responders, and members of the armed forces at Winfield House. This was an excellent reminder of how our two countries work together to improve nuclear security worldwide.

March 10, 2019
Don’t let the EU’s chicken scare stories stop Britain and America striking a magnificent trade deal
Ambassador Johnson: “chlorinated chicken” is simply the EU’s way of blocking fair competition. Britain now has the opportunity to decide its own rules and priorities. Read my piece for the Daily Mail on Sunday.

March 07, 2019
Ambassador Johnson Hosts Women In STEM Panel Discussion
For International Women’s Day Ambassador Johnson opened our #WomenInSTEM discussion speaking about the importance of encouraging more women into the STEM (Science, Technology, Engineering and Mathematics) sector and the value they add to the industry as a whole.

March 01, 2019
Don’t let smears about U.S. farms trap Britain into the EU’s Museum of Agriculture
“This week the United States published our objectives for a future trade deal with the UK. We are now ready to negotiate the most ambitious and comprehensive trade deal in the history of our special relationship. And of course we want agriculture to be part of those negotiations – it is a great opportunity for both of us.
But the British public has been led to believe otherwise. You have been presented with a false choice: either stick to EU directives, or find yourselves flooded with American food of the lowest quality. Inflammatory and misleading terms like “chlorinated chicken” and “hormone beef” are deployed to cast American farming in the worst possible light.”
This Op-ed by Ambassador Johnson was originally published in the Daily Telegraph of March 1st, 2019.

February 13, 2019
Secretary Pompeo’s Call With Russian Foreign Minister Sergey Lavrov
Ambassador Johnson: The United States is clear: We stand side by side with the United Kingdom in condemning Russia’s use of chemical weapons in Salisbury. The U.S. is determined to hold Russia accountable.

November 30, 2018
The U.S. and UK Must Stand Together to Cut Off the Iranian Regime’s Funds for Terror
This month, the United States has turned up the pressure on Iran by imposing the toughest-ever sanctions to starve the regime of money to fund terrorism. Last week our European partners joined us by announcing proposed sanctions on Iranian intelligence officials suspected of plotting assassinations in EU Member States. This is a welcome step forward, but this progress could be undermined by the EU-sponsored proposal to establish a Special Purpose Vehicle (SPV) to enable companies to circumvent U.S. sanctions.

November 28, 2018
If Britain takes back control of trade, you will be first in line for a U.S. deal (Op-ed)
But if Britain takes back control of its trade policy, you will be at the head of the line. America and Britain are two of the most advanced economies in the world. Together we could agree the most sophisticated and ambitious free trade deal ever done – a heavyweight deal that gets the whole world to sit up and take notice. Together, we can show the rest of the world how it’s done.

November 22, 2018
Ambassador Johnson’s Thankgiving Day Remarks 2018 at St Paul’s Cathedral
For 60 years, St Paul’s has honored the great sacrifice of our young patriots in the war.  And every day, they turn another page in the roll of honor.
And bring to light the names of more young Americans who laid down their lives for the liberty we enjoy today.  I’m grateful to St Paul’s – and the British people – for keeping their memories alive over all these years.  I’m also grateful that every year this cathedral invites us here to worship together on the most special American holiday.

October 26, 2018
Ambassador Johnson in the Sheffield Star
[Ambassador] Woody Johnson said the aerospace giant’s first factory in Europe was testament to just how good the city is. He was one of a host of global VIPs at the launch of the £40m facility near Catcliffe.   He also had a tour of the University of Sheffield’s Nuclear Advanced Manufacturing Research Centre.

August 01, 2018
America’s Thank You to Britain’s Finest
“So on behalf of the President and the American people, I want to thank every single one of you for your tireless work. You were at your very best during this visit.
But beyond the visit, I also want to thank you for the work you the whole year round. Every day I see the exceptional quality of policing in this country.”

July 26, 2018
U.S. Ambassador praises Leeds as ‘important city’ (via Yorkshire Evening News)
The American ambassador has given Leeds his endorsement and urged US companies to invest in the “important city”. Woody Johnson told the Yorkshire Evening Post “the only way is up” for Leeds as he singled out its tech, medical and education sectors for praise. But he also cast doubt on the prospect of a post-Brexit UK-US free trade deal, saying it was still “unclear” whether it could be done despite Prime Minister Theresa May publishing her Brexit strategy this month.

On a visit to the city, he said: “The business relationship that Leeds has with the US, fintech, hi-tech, medical tech, you have a fabulous, world class teaching hospital here and four universities. “It’s a blossoming community in a very nice setting. “I haven’t met that many people but I suspect they are a very well educated workforce, hard workers, perfect place for Americans to invest and to encourage local people to explore expanding into the US, because the US is exploding with prosperity now. “The stock markets, consumer confidence are off the charts now.” Mr
Johnson went on: “I was very impressed with Leeds, I think this city has so much to offer with the university, the people here the diversity of the community, so you can solve problems in a really, really interesting way.

“The only way I see is up, this community is going to really, really do well, and particularly when we stop talking about Brexit and start talking about prosperity for everybody.”

June 10, 2018
Op-ed: The F-35 fighter jet is a great deal for Britain. It adds fuel to your economy and fire to your defence
“With greater security comes greater prosperity. It has always been the case and it always will be. So the F-35 may not be cheap, but it is a great deal. The UK has added fuel to its economy, and fire to its defence. Now Britain is ready to continue doing what it has done since the Battle of Britain – protecting a free and strong Europe. And as always, we will be right by your side.”

May 08, 2018
Ambassador Johnson Visits Twitter UK (and learns how to code!)

February 2018
It was great to have the British American Parliamentary Group (BAPG)in the Embassy recently. They are key to building personal ties between U.S. & UK representatives and deepening the Special Relationship for the future. (see photo at top)

November 30, 2017
Ambassador Johnson’s St. Andrews Day Message 2017  “I hope Scots and Scots-at-heart have a great day. With 27 million Americans claiming Scottish ancestry, you can be sure there will be celebrations on both sides of the Pond today.”

October 18, 2017
Why U.S.-Scotland Links Mean a Great Deal   “Scotland’s economic importance to the United States cannot be underestimated. The connections forged over the centuries have established a close and highly beneficial trading partnership between us.”
This op-ed by Ambassador Johnson was first published in the Scotland Herald, edition of Wednesday, October 18, 2017.

October 17, 2017
Making a special bond even stronger   “Americans will always have a special bond with the people of Northern Ireland.   That is only natural. We have a long shared history. It was men and women from Northern Ireland who laid the very foundations of my country. Today millions of Americans proudly trace their family trees back to this region.”
This op-ed by Ambassador Johnson was first published in the Irish News, edition of  Monday, October 16, 2017.

October 03, 2017
Ambassador Johnson @USAmbUK: “Our flag has been lowered to half-staff as we mourn all the loved ones who were murdered & injured in yesterday horrible tragedy in Las Vegas.”
We have set up a virtual condolence book online.

September 08, 2017
This week as the weather turned cooler and kids headed back to school, Ambassador Johnson hit the ground running, meeting with Chancellor Philip Hammond at No. 11, Defense Secretary Michael Fallon at the Ministry of Defence, and members of the UK press at an off-the-record gathering at the U.S. Embassy in Grosvenor Square.

August 30, 2017
Ambassador Johnson has arrived at the Embassy and is already hard at work. He’s had a busy first week, including meetings with Foreign Secretary Boris Johnson, Minister of State Sir Alan Duncan MP, Permanent Under Secretary Sir Simon McDonald, and, of course, Palmerston (the Foreign Office’s resident feline) at the Foreign and Commonwealth Office. They’ve extended a warm welcome – watch it here!