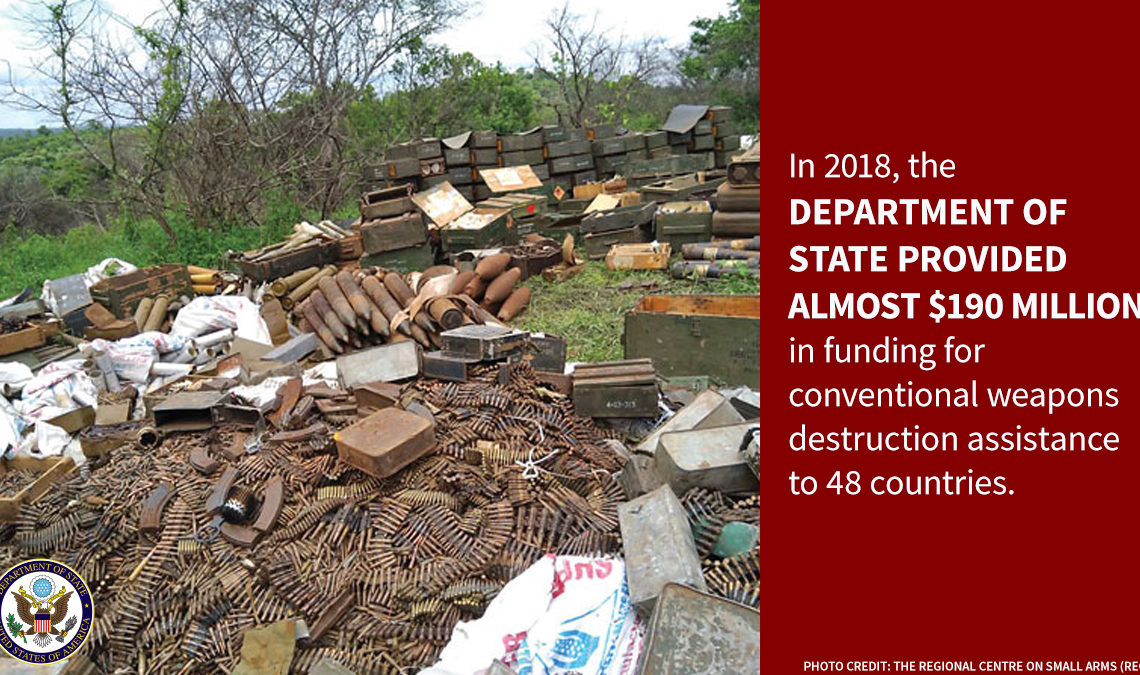 “This 18th Edition of To Walk the Earth In Safety summarizes the United States’ Conventional Weapons Destruction (CWD) programs in 2018.
…
Thanks to the U.S. Congress’ bipartisan support and generosity of the American people, we can attest that our goal remains a future in which all may walk the earth in safety”

In today’s dynamic world, threats to U.S. national security abound. The work carried out by the Department of State’s Office of Weapons Removal and Abatement (PM/WRA) through its CWD programs is essential to protecting civilians and advancing our nation’s interests. From my work as a Reserve Naval Officer and as a staff member of the Senate Foreign Relations Committee, I understand the need for a robust effort to secure weapons so they do not fall into the hands of nefarious actors.

Stockpiles of excess, poorly-secured, or otherwise at-risk conventional weapons remain a serious challenge to peace and prosperity in many countries. Poorly-secured munitions are illicitly diverted to terrorists and other destabilizing actors. Explosive hazards continue to kill and maim people long after conflicts have ended, preventing the safe return of displaced people and suppressing economic opportunities that are crucial to prosperity and political stability. As long as these dangers persist, it is difficult for communities to recover from conflict.

Since late 2015, the United States and our partners in the Global Coalition to Defeat ISIS have cleared IEDs from critical infrastructure in Iraq and Syria including hospitals, schools, and water pumping stations, facilitating the flow of hundreds of millions of dollars in stabilization assistance and humanitarian aid into liberated areas. In this regard, explosive hazard clearance serves as an essential enabler for follow-on stabilization and humanitarian assistance. CWD programs such as this lay the foundation for long-term benefits. U.S. humanitarian demining assistance to Vietnam began in 1993 and helped set the stage for our current bilateral relationship. In the near term, across Africa, the Middle East, and Southeast Asia, CWD programs focused on excess and poorly-secured weapons have helped keep those weapons out of the hands of criminals and terrorists.

Since 1993, the United States has provided more than $3.4 billion in CWD assistance to over 100 countries. In 2018, we had active CWD programs in 59 countries. These programs are implemented by commercial contractors, nongovernmental organizations, and international organizations.

United States CWD programs are tied to key U.S. foreign policy priorities and play a direct role in keeping U.S. citizens and our allies safe, while also clearing the way for a stable, secure, and prosperous future in countries that are key to U.S. security interests. Thanks to the U.S. Congress’ bipartisan support and generosity of the American people, we can attest that our goal remains a future in which all may walk the earth in safety.

The 2019 report is available from the U.S. State Department.