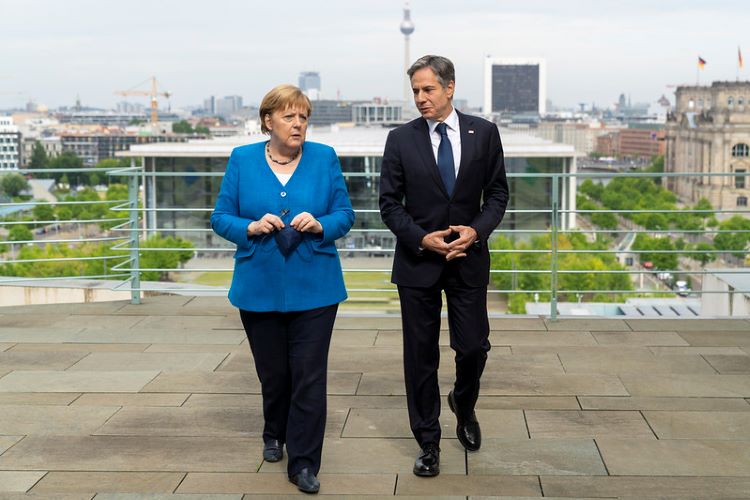 The United States is working with allies across Europe to counter human rights abuses, preserve democracy and tackle climate change.

On his trip to Germany, France, Italy and the Vatican, Secretary of State Antony Blinken emphasized the United States’ long-lasting relationships with each of the countries and the United States’ commitment to strengthening the NATO alliance and fortifying trans-Atlantic security.

While in Germany, Blinken:

Met with Libyan Interim Prime Minister Abdulhamid Dabaiba about a brighter future for the country. Launched the U.S.-Germany dialogue on Holocaust issues with Maas. Spoke at a youth outreach event about trans-Atlantic partnerships.
“I think it’s fair to say that the United States has no better partner, no better friend in the world than Germany,” Blinken said before meeting with Merkel.

In Paris, Blinken and French President Emmanuel Macron reaffirmed the two countries’ alliance. The two discussed how to counter terrorist threats, support global democracy and join efforts to improve the capacity of African partners in the Sahel region.

Blinken also met a group of French young people to discuss democracy and human rights. Blinken reflected on his time growing up in France and answered questions about democracy, police violence, climate and racism. He talked about the need to build strong trans-Atlantic ties for the next generation, saying “in my opinion, this is more important than ever. Our history is long-lasting, but it is particularly important today.”

The United States and the Holy See have enjoyed a strong relationship, especially when addressing humanitarian issues together.

Blinken met with Pope Francis at the Vatican June 28, where they discussed the importance of combating human trafficking, protecting human rights and taking on the climate crisis. They also discussed China and the humanitarian crises in Lebanon, Syria, Venezuela and the Tigray region of Ethiopia.

Blinken also sat down with Holy See Secretary of State Cardinal Pietro Parolin and Secretary for Relations with States Archbishop Paul Gallagher in Vatican City. There, they discussed how to address the root causes of migration and expand COVID-19 vaccine distribution.

Today I had the great pleasure of touring the Vatican, including the beautiful Sistine Chapel. The spiritual atmosphere, the divine art, and the impressive architecture left me speechless. Truly stunning. pic.twitter.com/aa1jrzTojV

Blinken met with Italian President Sergio Mattarella and Prime Minister Mario Draghi to reaffirm their countries’ long-standing economic ties and their commitment to the NATO alliance.

In Rome, Blinken co-hosted a Syria ministerial with his Italian counterpart. He reiterated the imperative of ensuring that vital humanitarian assistance reaches all Syrians in need and underscored the importance of reauthorizing and expanding the ability of the United Nations to provide this life-saving assistance to the Syrian people across borders. He also announced more than $436 million in additional humanitarian assistance to vulnerable Syrians both in Syria and in the surrounding countries that host them.

On June 28, Blinken and Italian Foreign Minister Luigi Di Maio hosted a meeting of the foreign ministers with the 83-member Global Coalition to Defeat ISIS. During the meeting they discussed ways to sustain pressure on ISIS remnants in Iraq and Syria, and to counter ISIS networks elsewhere, including in Africa. They also assessed priorities for the coalition’s lines of effort related to stabilization, foreign terrorist fighters, counter-ISIS financing and countermessaging efforts.

Ministers stressed that the Global Coalition to Defeat ISIS, of which the United States is a leading member, remains unwavering in its commitment to the enduring and global defeat of ISIS. Because of COVID restrictions, this was the first in-person meeting of the coalition since February 2019.

At trip’s end, Blinken participated in the June 29 G20 foreign ministers meeting in Matera, Italy, where leaders from the world’s 20 largest economies met to discuss multilateral cooperation and how to end the COVID-19 pandemic.

“Through constructive diplomacy, G20 Foreign & Development Ministers are building back better globally,” Blinken said in a tweet. “At the joint session we agreed that now more than ever we must reinvigorate our work on global food security, deepen our economic ties, & address crucial development challenges.”