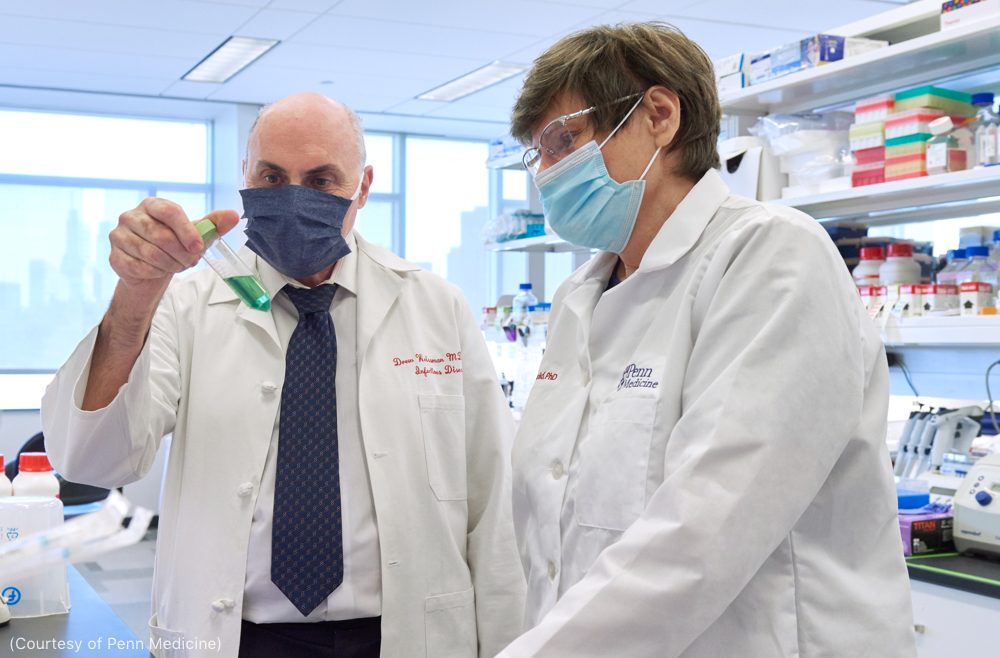 Two scientists with the University of Pennsylvania (Penn) whose 2005 work was critical in the development of the current COVID-19 vaccines recently won prestigious biomedical research honors, known as the Lasker Awards.

The 2021 Lasker-DeBakey Clinical Medical Research Award honors two scientists: Drew Weissman, a professor of vaccine research at Penn, and Katalin Karikó, a senior vice president at BioNTech and an adjunct professor of neurosurgery at Penn.

Their work in 2005 — discovering a new therapeutic technology based on modifying messenger RNA (mRNA) — has led to the development of mRNA vaccines, which teach human cells how to make a protein that triggers an immune response.

“This breakthrough enabled rapid development of highly effective COVID-19 vaccines,” the Lasker Foundation said in announcing the awards. “In addition to providing a tool for quelling a devastating pandemic, the innovation is fueling progress toward treatments and preventives for a range of different illnesses.”

In accepting the honor, Weissman said that equally important to their discovery is ensuring that everyone is able to realize the benefits. “We are collaborating with researchers around the world to help them create their own mRNA vaccines for COVID-19 to increase the global supply for people in low- and middle-income countries. And we are taking opportunities to educate people on the science behind this often-misunderstood vaccine.”

Karikó, who grew up in a small Hungarian town, likewise recognized her fellow scientists who she said also contributed to the success of the COVID-19 mRNA vaccine. “I also think about all of the young girls who may become inspired by my story and want to become scientists. To them I say: stay curious, adopt the right attitude and stay on the track no matter how long and winding that road may be,” she said.

The Lasker Foundation and the awards are named after Mary Woodard Lasker (1901–1994), who was a champion of medical research, and her husband, Albert Davis Lasker (1880–1952), who was a pioneer in the advertising field. The couple established the New York-based foundation in 1942 to support biomedical research, fueled by Mary Lasker’s call to action: “If you think research is expensive, try disease!”