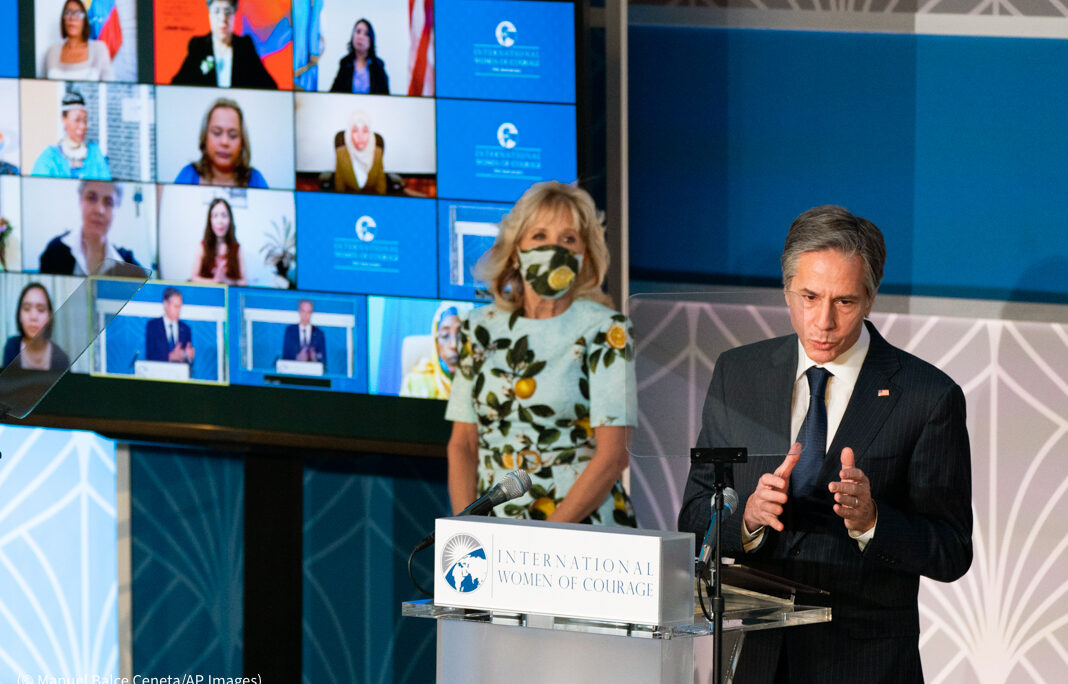 Courageous women who stand up for their rights inspire a better world, said U.S. Secretary of State Antony Blinken.

Blinken and first lady Jill Biden hosted the 15th annual International Women of Courage Awards in a virtual ceremony on March 8. The ceremony honored a group of brave women, nominated by U.S. embassies from around the world, who have made a difference in their communities, countries and the world.

These women have dedicated their careers to advocating for justice, human rights, gender equality and women’s empowerment, often while sacrificing their personal safety.

During the ceremony, Blinken emphasized, “that it is often women who lead the charge for human rights, democracy and justice, including in places where women hold much less than half of the political, economic and social power … And it’s often women and girls who are the most vulnerable to human rights abuses.”

The award ceremony recognized such women as Venezuelan Ana Rosario Contreras, who is president of the Caracas Nurses’ Association and a front-line fighter for health care workers’ rights in a country that suppresses free speech. Under the illegitimate Maduro regime, those who are deemed opponents of Nicolás Maduro and his cronies are often jailed, tortured and detained. Despite these threats, Contreras continues to publicly fight for the rights of health care workers, patients and labor unions.

Blinken and Biden also presented a posthumous group award to seven Afghan women — public servants, journalists and activists — who were assassinated simply for serving their communities.

“They represent women and girls across Afghanistan who continue to press on in defense of their hard-won gains and in the face of high rates of violence against Afghan women,” Blinken said.

Both Blinken and the first lady emphasized that the United States will continue to stand with and advocate for women and girls around the world.

“Your fight is our fight and your courage calls us to come together again, and again, and again,” Biden said. “The United States will stand with you. We will make the choice to lead, to be bold and to lift up women and girls everywhere who light our way.”

Read about all the International Women of Courage awardees here.