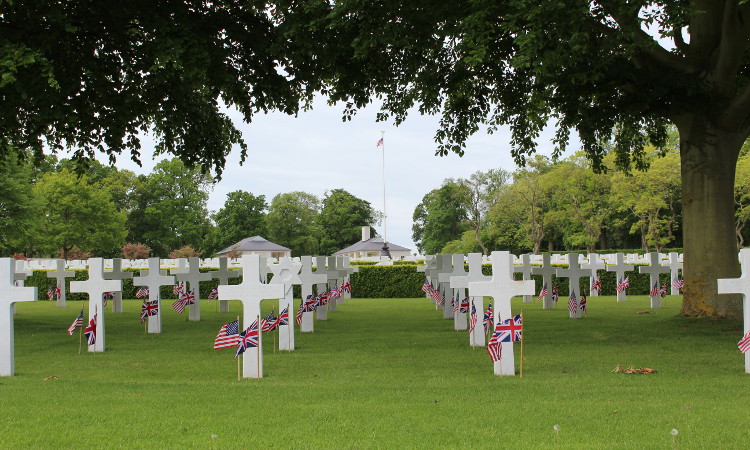 When you go home:

Tell them for us and say
“For your tomorrow
We gave our today”.

The Cambridge American Cemetery honours the competence, courage and sacrifice of the Americans who, as part of the ‘friendly invasion’, served in the UK during World War II. Interpretive displays, photographs, film and interactive kiosks in the extensive Visitor Center chronicle their stay.

We aim to tell the stories of the individuals buried here or memorialized on the Wall of the Missing.

Staff are on hand to answer questions, give ‘flagpole’ introductions or lead tailor-made tours. Contact us to arrange a visit and/or tour:

On the Friday before Memorial Day, each of the headstones at Cambridge American Cemetery are dressed with two flags; host country on the right, U.S. flag on the left. They are collected the following week and stored. When next-of-kin visit their loved ones, staff dress the headstones with the flags which are then presented to the family.

From the Wall of the Missing – Major Joseph Shaffer

Joseph Shaffer joined the US army in California. Commissioned and selected as aircrew he became a pilot with the 1st Fighter Group which was ferrying Lockheed P-38 Lightning fighters across the North Atlantic to England as part of Operation Bolero. Iceland was a mid-Atlantic fuel stop. Lieutenant Shaffer’s squadron was assigned to the 342nd Composite Group, one of those responsible for the air defense of Iceland.  On 14 August 1942, flying his P-38 from Reykjavik, he shot down a Focke-Wulfe Fw 200 Condor, the first Luftwaffe aircraft destroyed by USAAF in World War II. He was awarded the Silver Star.

In 1944, Major Shaffer was based at Andover where his unit, 402nd Fighter Squadron, was tasked with attacking installations in France, prior to D-Day. On 30 May 1944 Joseph took off for Glide Bombing Training. Target practice was underway when, after dropping his bomb, he failed to retrieve his P-38 from a steep dive.