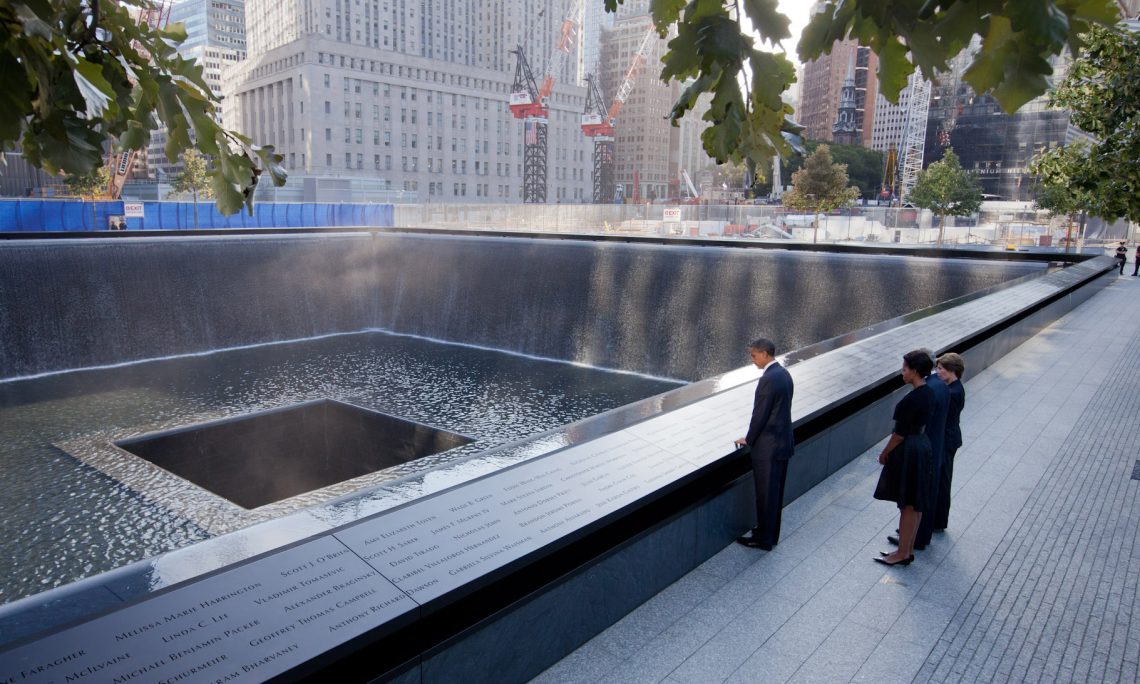 President Barack Obama and First Lady Michelle Obama, along with former President George W. Bush and former First Lady Laura Bush, pause at the North Memorial Pool of the National September 11 Memorial in New York, N.Y., on the tenth anniversary of the 9/11 attacks against the United States, Sunday,

The Memorial Day holiday celebrated by Americans on the last Monday of May represents for many the unofficial beginning of summer. Many will travel over the long holiday weekend to seek out friends and family, beaches and amusement parks. But most will pause at some point to recall the holiday’s true purpose: honoring those who died defending their nation.

Meanwhile, in Waterloo, New York — the place where Memorial Day began (at least according to Waterloo) — festivities include a parade, arts and crafts show, a strawberry festival, music, tours of the town’s Civil War museum and an antique car show. Civil War buffs in period uniforms and dresses hold a two-night encampment and stand by for live cannon-fire demonstrations. Those not too full from the pizza-eating contest can compete in a five-kilometer race.

The story of Waterloo, and that of the holiday itself, is woven deeply into the nation’s history.

During the American Civil War of 1861–1865, which claimed the lives of more than 550,000 people, many citizens began to place flowers on the graves of the war dead. A number of northern municipalities continued these “Decoration Days” after the war ended, but the decisive event occurred in 1866 in Waterloo, 450 kilometers from New York City.

In 1865, Waterloo resident Henry C. Welles, the town’s druggist, hit on the idea of formally setting aside a day to honor those killed in the war. He was supported by one of his customers, John B. Murray, who had risen to the rank of brigadier general in the Union (northern) Army, and Murray’s friend, Major General John A. Logan, another retired Union commander. In 1866 Waterloo held the first formal, village-wide, annual observance of a day dedicated to honoring the war dead, and it has continued to do so for 144 years. On Memorial Day weekend, visitors inflate the town’s population to several times its normal size (5,118 according to its website).

Logan, founder of the Grand Army of the Republic, an organization of Union veterans, in 1868 designated May 30 as a day “for strewing with flowers, or otherwise decorating the graves of comrades who died in defense of their country during the late rebellion, and whose bodies now lie in almost every city, village, and hamlet churchyard in the land.”

Among the ceremonies held that day was one at Arlington National Cemetery in Virginia, across the Potomac River from Washington. President Ulysses S. Grant presided. After the speeches and tributes, thousands of war orphans, veterans and others decorated the graves of the Civil War dead. There were more than 20,000 such graves at Arlington Cemetery alone.

By the turn of the century, nearly every state had declared Decoration Day an official holiday. After World War I, Decoration Day was expanded to honor those killed in all of the nation’s wars, and after World War II it became known as Memorial Day. (Veterans Day, which honors all veterans, living and dead, is celebrated each year on November 11.)

Several Northern and Southern cities claim to be the originators of Memorial Day, but in 1966, President Lyndon B. Johnson proclaimed Waterloo as its official birthplace.

Congress established Memorial Day as a federal holiday in 1971 and fixed its observance on the last Monday in May.

The original Waterloo commemoration centered on the decoration of soldiers’ graves, the lowering of flags to half-staff, and veterans’ parades. These ceremonies continue in cities and towns across the nation on Memorial Day.

There are more than 2.9 million gravesites at 130 national cemeteries around the country. For Memorial Day, volunteers will decorate most of these veterans’ graves with small American flags. The U.S. president or vice president typically presides at Arlington National Cemetery and places a wreath at the Tomb of the Unknowns. Solemn observances are held at Civil War battle sites, including Gettysburg, Pennsylvania, and Sharpsburg (Antietam), Maryland.

At 3 p.m., a National Moment of Remembrance unites Americans in prayer and thought as they contemplate the sacrifices made in their behalf.

Thus, even as Americans enjoy their long weekend and the prospect of summer, they also can be found in more somber moods. Wreaths will be laid, thanks given and heads bowed in recognition of those who made the ultimate sacrifice.