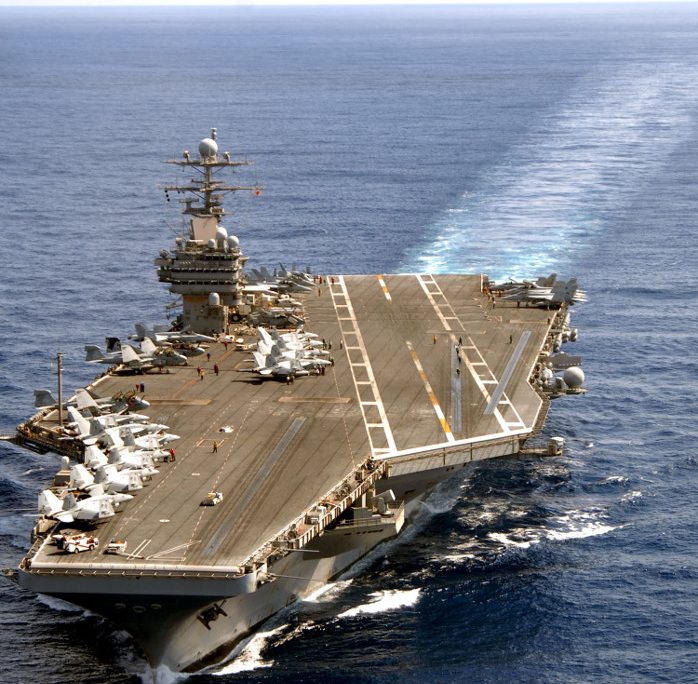 The Nimitz-class aircraft carrier USS Theodore Roosevelt (CVN 71) and the guided-missile destroyer USS Winston S. Churchill (DDG 81) are scheduled to pull in to Portsmouth, U.K., for the first port visit of their deployment, March 22.

The port visit serves to enhance U.S. – U.K. relations as the two nations work together for a stable, secure and prosperous Europe.

“We are very excited to be in the U.K. This port visit is a great opportunity for the Sailors of Theodore Roosevelt to meet the people of Portsmouth and experience the history and rich culture of the United Kingdom,” said Capt. Daniel Grieco, commanding officer of Theodore Roosevelt. “Port visits like this give us a chance to work with our allies, improve interoperability and strengthen friendships as our countries work together to make Europe and the world a safer place.”

Theodore Roosevelt, named in honor of the 26th U.S. president and commissioned Oct. 25, 1984 as the 4th Nimitz-class carrier, last visited Portsmouth in 2009. It was the ship’s final port visit before her four-year Refueling and Complex Overhaul.

Chief Aviation Boatswain’s Mate (Equipment) Will Trogdon, assigned to Theodore Roosevelt and a native of Bristol, Tennessee, has visited Portsmouth previously and is happy to return.

“Portsmouth’s a lot of fun,” said Trogdon. “I’ve been there a few times and I have family near London. It’s never a disappointment.”

Churchill, the only active-duty ship named after a foreign national, is the fifth U.S. warship named in honor of a U.K. citizen. Churchill is also the only U.S. Navy ship to have a Royal Navy officer assigned as ship’s company.

“Serving as the ninth British navigator onboard the USS Winston S. Churchill has definitely been a career highlight,” said Royal Navy Lt. Lynsey Sewell.  “The training and experience which I have gained onboard has been invaluable whilst the welcome and support I have received has been truly humbling.  Navigating the ship into Portsmouth will be an incredible moment for me.”

Churchill’s commanding officer said the visit is a perfect opportunity to recognize the ship’s namesake and strengthen the two countries’ enduring friendship.

“It is a true honor to be commanding officer onboard USS Winston S. Churchill when sailing her back into U.K. waters.  My crew and I pride ourselves on our longstanding association with the British Isles and, in particular, the Royal Navy,” said Cmdr. Christine O’Connell, Churchill’s  commanding officer.

Quartermaster Seaman Jamail King, assigned to Theodore Roosevelt and a native of Cleveland, said he is enthusiastic about making his first port visit.

The five ships and nine aircraft squadrons of TRCSG consist of approximately 6,000 Sailors and Marines who have spent the last year conducting intensive training and certification exercises to establish a safe, cohesive organization capable of performing a wide variety of missions across the globe, ranging from counter-piracy and ground support operations to humanitarian assistance and disaster relief.

U.S. 6th Fleet, headquartered in Naples, Italy, conducts the full spectrum of joint and naval operations, often in concert with allied, joint, and interagency partners, in order to advance U.S. national interests and security and stability in Europe and Africa.