Home Home / News & Events / The Future of the Special Relationship 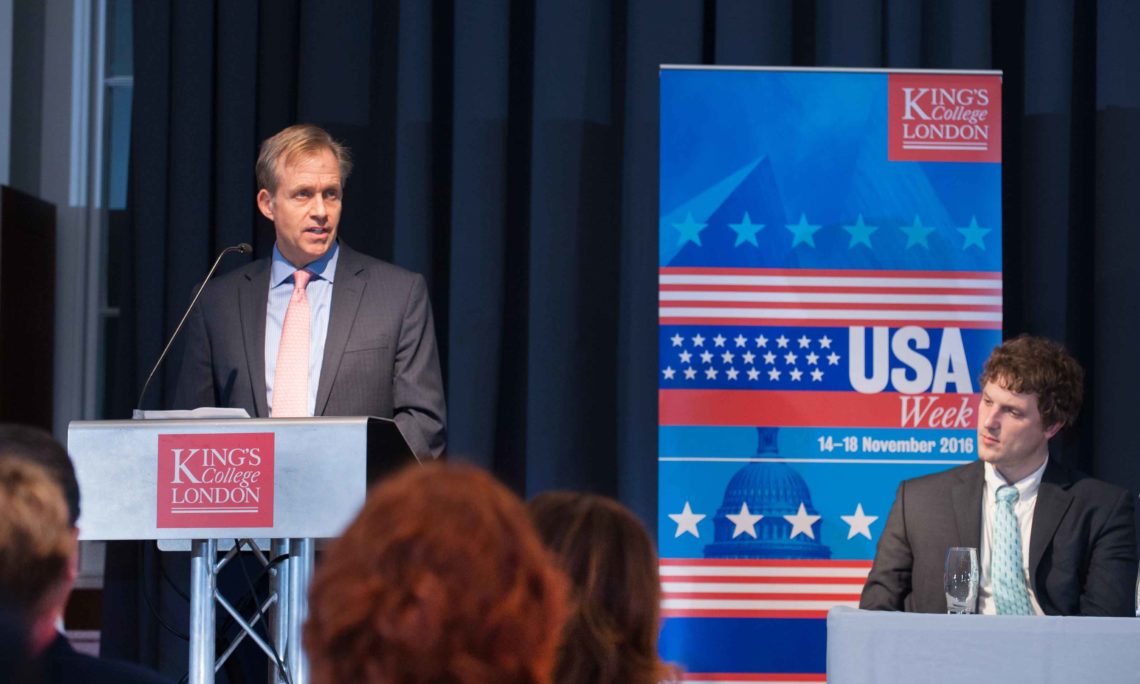 Because ultimately the future of our Special Relationship will be in the hands not of politicians or diplomats like me. It resides with you- the students and young people here in the room today.

DCM LUKENS: Hello everyone. Thank you, Dr. Newman, for that kind welcome- it’s a great pleasure to be here with you all.

To help set the scene for tonight’s discussion on the future of the Special Relationship, I want to start off by very quickly recapping its past. The story so far, if you will.

Once upon a time… we were one country.

Then there were some disagreements, shall we say? (I’m getting the hang of British understatement.) So we fought. I won’t dwell on the detail, but we became two countries.  And then we made up.

Time passed, and we fought again. Alongside each other this time- for freedom and democracy in the face of fascism. And we prevailed.

As we know, Winston Churchill travelled to Fulton Missouri 70 years ago this year. He talked about the ‘sinews of peace’ and an ‘iron curtain’. And while he was there he coined the phrase that still applies to this day.

The Special Relationship that he described helped us build institutions together to sustain a prosperous peace- Bretton Woods, the Marshall Plan, the United Nations, and NATO.

It captured the idea that our history and our common culture lead us to share the same values and the same goals.

It means we both aspire to a more peaceful, more prosperous, more just world.

And despite being, famously, two countries divided by a common language, we understand the same things when we say these words.

So today, we are the largest investors in each other’s’ economies. 1million Americans go to work every day in British firms in the US, and 1 million Britons do the same in US firms over here.

We watch each other’s movies, read each other’s novels and listen to each other’s music. We have between us the world’s most widely read newspapers, the most Oscar nominations, the most Nobel prize winners…and of interest to this room in particular- the top universities on the planet- with rich and productive partnerships between them.

And we continue to work in close accord both diplomatically and militarily. In the global fight against Islamic State. In imposing sanctions for Russia’s aggression in the Ukraine and Crimea. In a historic deal to prevent Iran gaining a nuclear weapon. In pushing for a diplomatic solution in Syria. In sending people and expertise to overcome the outbreak of Ebola in West Africa.

It is worth, I think, taking the time to repeat this story as all too often we can be prone to discount the familiar. It is possible, tempting even, to jump all too quickly to the ‘yeah…but’. Without first giving due weight to the ‘well, of course’.

And when you stop to think about it there is, of course, no other country with whom America both needs to work – and wants to work – more than the UK.

It is true that, as in any relationship, at times there have been tension and differences of opinion between us.  Pronouncing the death of the Special Relationship has been a popular pastime almost from the moment Winston Churchill defined it in the first place. Just a glance at the archives will throw up disagreements between us over Suez in the ‘50s, Vietnam in the ‘60s, Grenada in the ‘80s and Gerry Adams in the ‘90s.

I have no doubt that there will be more such headlines in the years to come. And yet it remains the case that what we share together is, in the words of President Obama earlier this year- “unmatched and unbreakable.”

Unbreakable – not because it is some rigid thing, stuck on past glories and cast in bronze like the statues of Winston Churchill and FDR.

Over the decades, it has adapted and remained relevant, regardless of the challenges facing our world. And whichever administration is in office on this side of the Atlantic or back home.

Following last week’s election, President Obama and my boss Secretary of State John Kerry have both made clear that we remain focused firstly on continuing our work on our shared foreign policy goals.  And secondly that we will work constructively on a smooth transition to the new administration in January next year. The relay race, as President Obama has called it, will continue.

That’s the official position. And it is true. And it also does not capture the full picture by any means.

Like you, I recognize that we are living in what might be called ‘interesting times’. On both sides of the Atlantic, on both sides of the political spectrum, long-standing orthodoxies are being challenged. Here, back home, around the world, we are seeing divides opening up, differences of opinion becoming magnified, a polarization in points of view.

And against that backdrop, the practical implications of this year’s political events are not yet fully understood. The nature of the UK’s future relationship with the EU is still being worked through. The full detail of President-elect Trump’s policies and priorities are yet to be seen.

These are unsettling times for many. It is understandable that as we adjust to new realities both here and back home, there will be some significant unknowns, and anxieties that go along with them.

I would point to the fact that our story shows that Washington and London have consistently proved our ability to work constructively for the common good.

What’s more, and perhaps more fundamentally, I believe our relationship is unbreakable for reasons that go far beyond diplomats and generals, politicians and leaders.

The unwritten alliance, as Winston Churchill also described it, is so much more than the connections between our political institutions. It is woven as well from the countless bonds built between people on both sides of the Atlantic. Between citizens beyond our capital cities, from Durham to Detroit, Bangor to Baton Rouge.

If you will indulge me, there is an analogy for us here in a subject well known to you all at Kings: the structure of DNA.

Famously that discovery was the result of an American biologist James Watson who had teamed up with an English physicist Francis Crick. Between them they advanced the boundaries of human knowledge.

They did not discover the structure of DNA in a vacuum. They worked with the advances made by many who came before them- not least on the insights developed here by Ray Gosling, Maurice Wilkins and Rosalind Franklin.

The teamwork of those scientists from both our countries added another paragraph in the continuing story of our Special Relationship; another example of the countless individuals in the generations that have preceded us. Women and men, both famous and less well known, who did the hard daily work, building the contributions our countries have made to the world we know today.

Consider for a moment that famous double helix shape our joint Nobel Prize winners identified. It provides an interesting image for our two nations- the coils are intertwined, similar, closely related but not the same. And these coils are held strongly together by countless strands.

For my purposes, the bonds are not of Adenine and Thymine, Guanine and Cytosine. They are our Artists and Tourists, Chemists and Grad Students. Activists and businesswomen. Inventers and engineers, economists and entrepreneurs. They are each and every American and Briton who over the years and to this day, get to know each other and like each other, work together and understand each other. They are the people building bridges, the glue that keeps the Transatlantic relationship strong.

These properties of DNA are what give it its characteristic functions. They allow it to carry information down through the generations. Transmitting and reproducing. Evolving and changing through time.

Because ultimately the future of our Special Relationship will be in the hands not of politicians or diplomats like me. It resides with you- the students and young people here in the room today.

You will be the future stewards of the world we share. Which is why I am do delighted that you will continue to be building those links and developing connections with your counterparts and contemporaries from my side of the pond.

And doing so not just as students today, but as the future activists and businesswomen, inventers and engineers that you will end up being. And yes, as the future diplomats and politicians and leaders too.

As the President said on Election night- each of us has the power to choose our path. Whatever you are passionate about, go get involved, get engaged. Work with each other to make it happen.

The future is uncertain, yes. It always is. And that means that for each generation it is up for grabs.  The story of our Special Relationship is still being written, every day. I have no doubt that by working together your chapter will be as fascinating, meaningful and important as those that have come before.